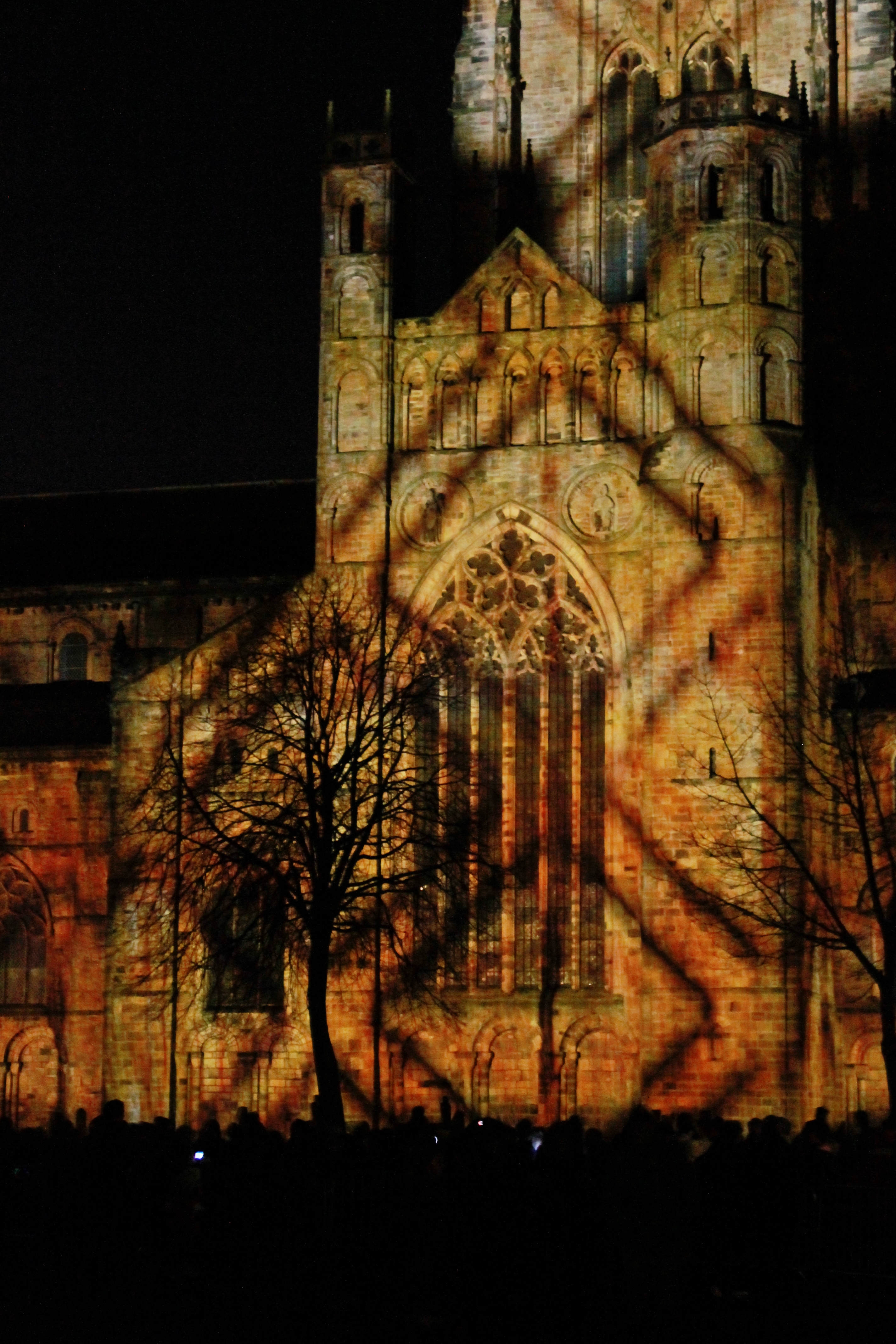 In November Durham hosted the third edition of the Lumiere festival. Registered arts charity Artichoke were behind the dazzling nocturnal transformation of the city that saw Norman landmarks and modern complexes alike illuminated by 27 innovative light art installations.This gallery presents selected submissions that captured the artworks, and the atmosphere created by an estimated 175,000 visitors storming Durham’s narrow streets over this unique four-day long weekend. 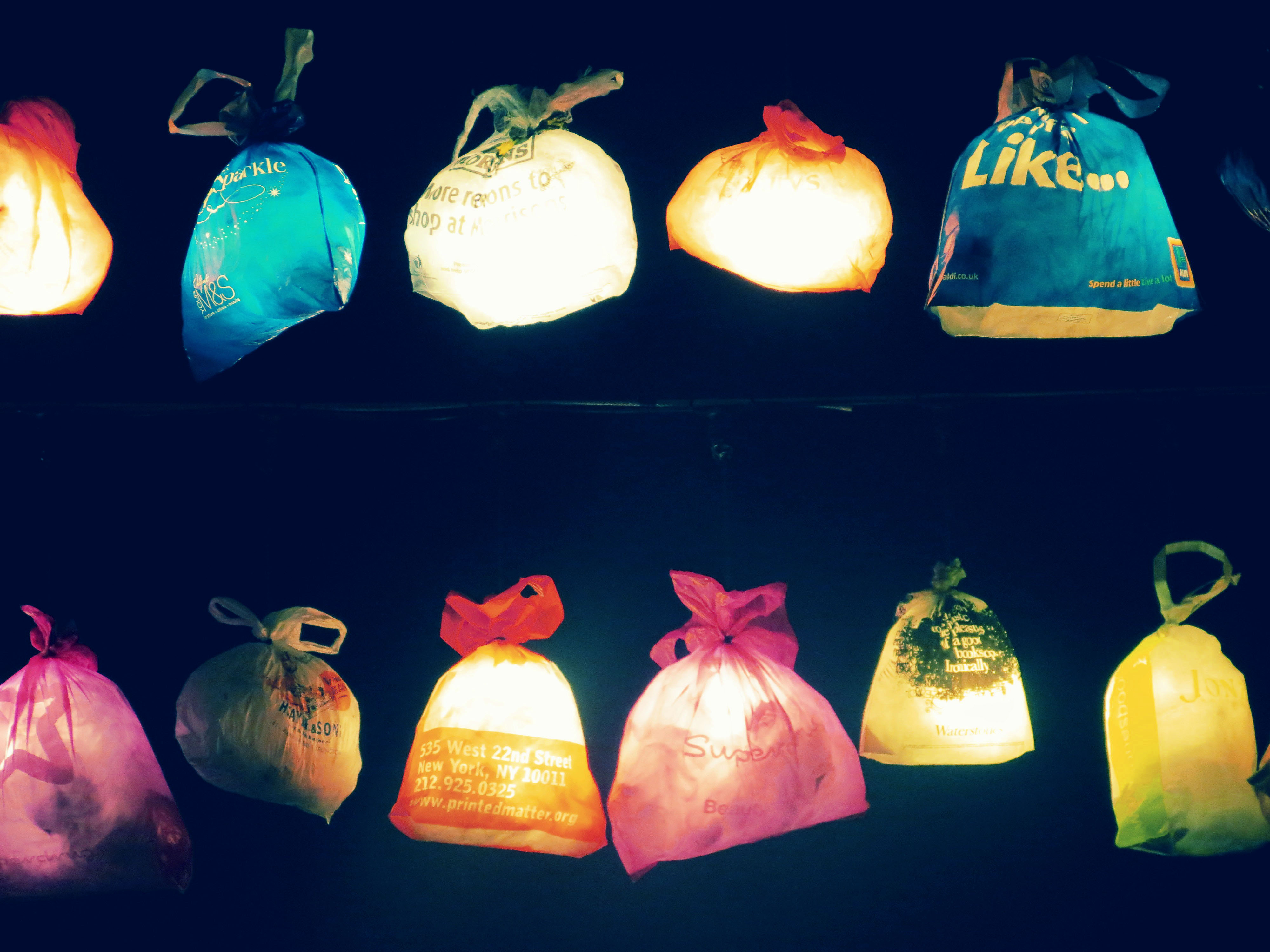 Just by clearing out their cupboards, this year the general public were able to contribute to one of the largest works of art to feature at the festival. Recycled ‘baubles’ were fashioned from plastic shopping bags in an array of bright colours, filled with light and hung above the street. These bags were all donated by members of Durham’s local community, who had the opportunity in the days leading up to the festival to visit a pop up workshop and help create a ‘lasting festive memory’ for their city. 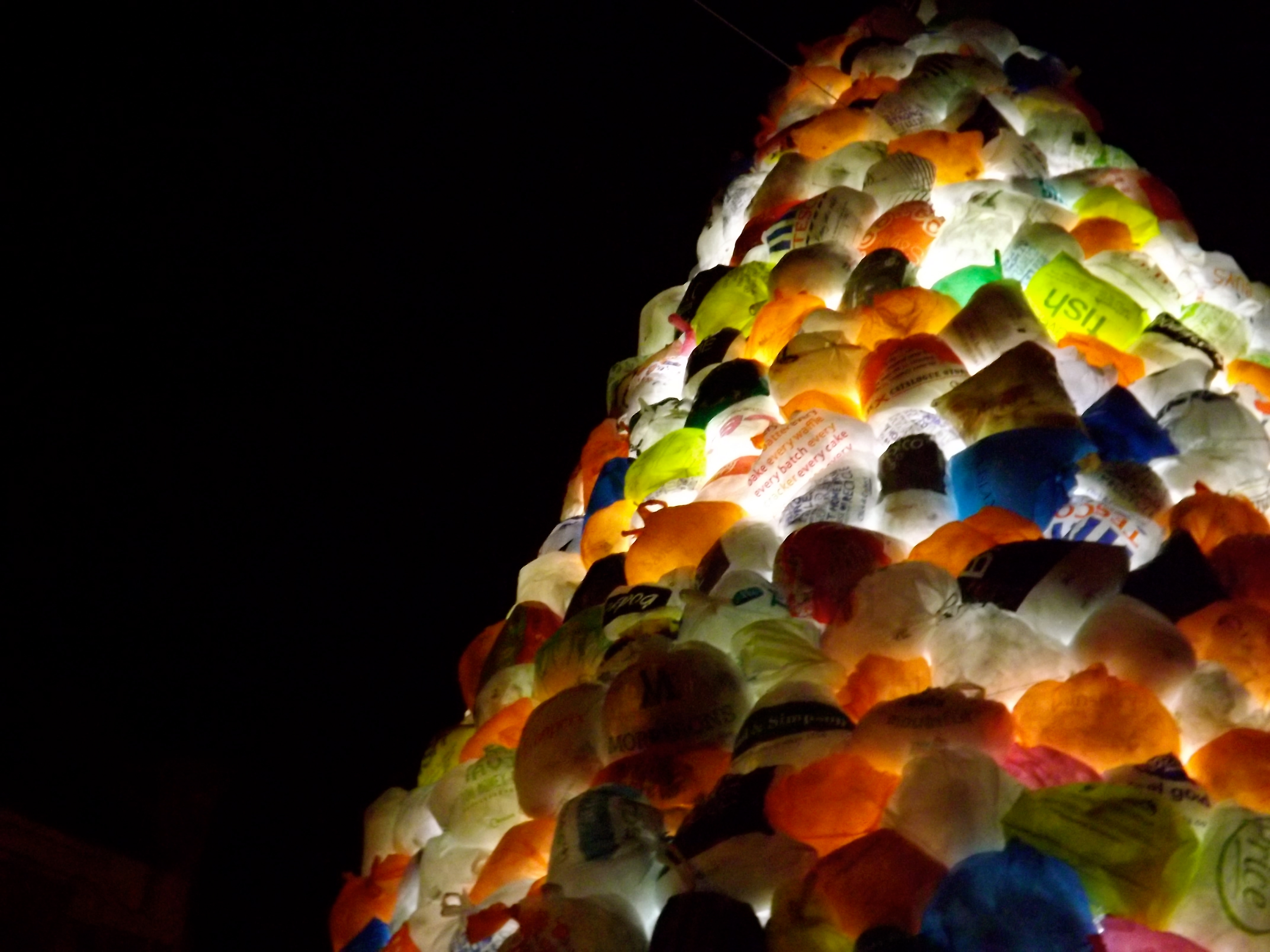 And the impressive pièce de résistance: a 9m tall ‘Consumerist Christmas Tree’, constructed from over 3,000 plastic bags. The installation is an expansion of an original piece featured in ‘Plastiksack! – a four-month long exhibition in Switzerland. The idea was conceived by Spanish art collective Luzinterruptus, who state their aim as to raise awareness of our ‘excessive use of plastic bags and the consequences that this consumption has on the environment…’ . Particularly poignant in the build up to Christmas, the artwork will remain in situ until the end of the festive season. 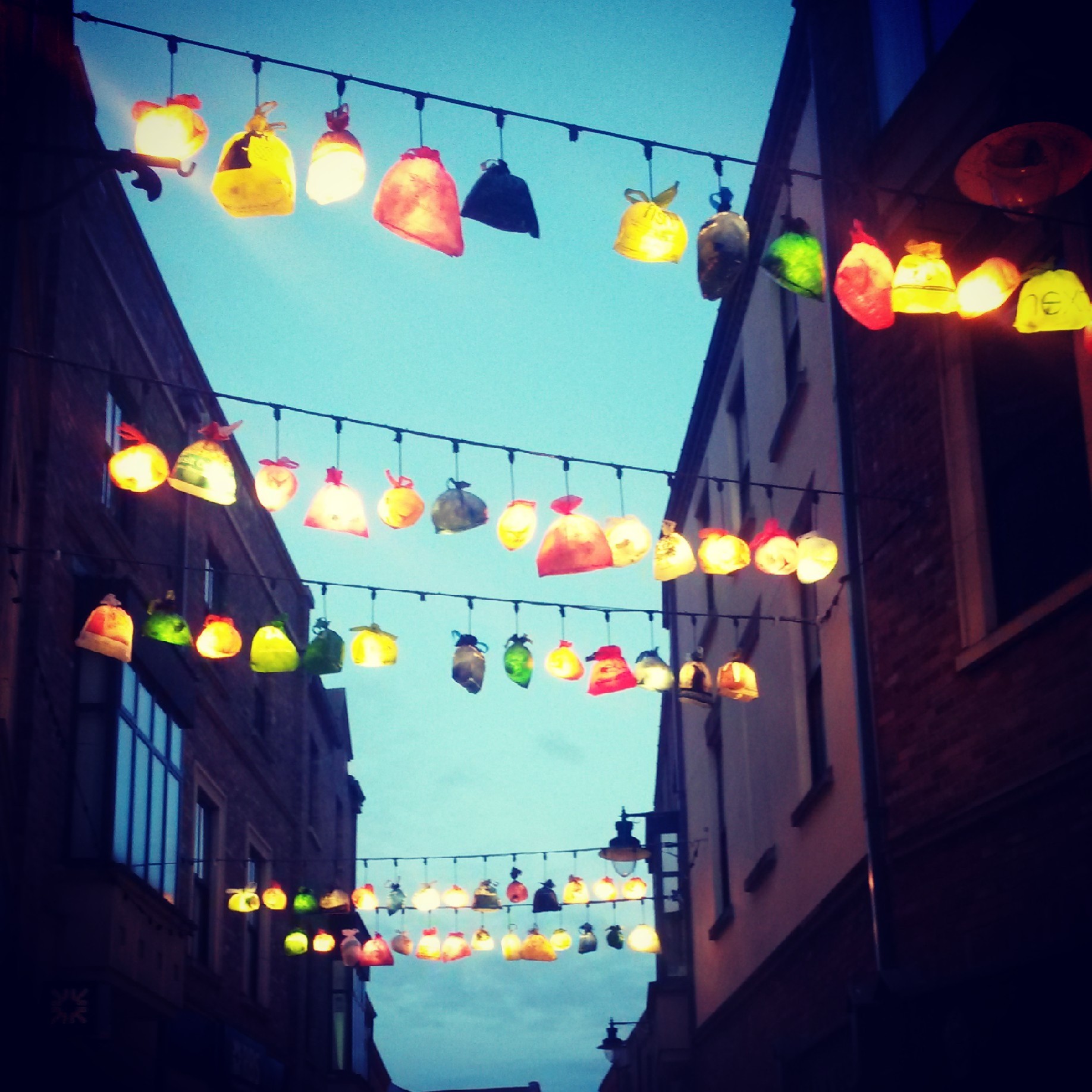 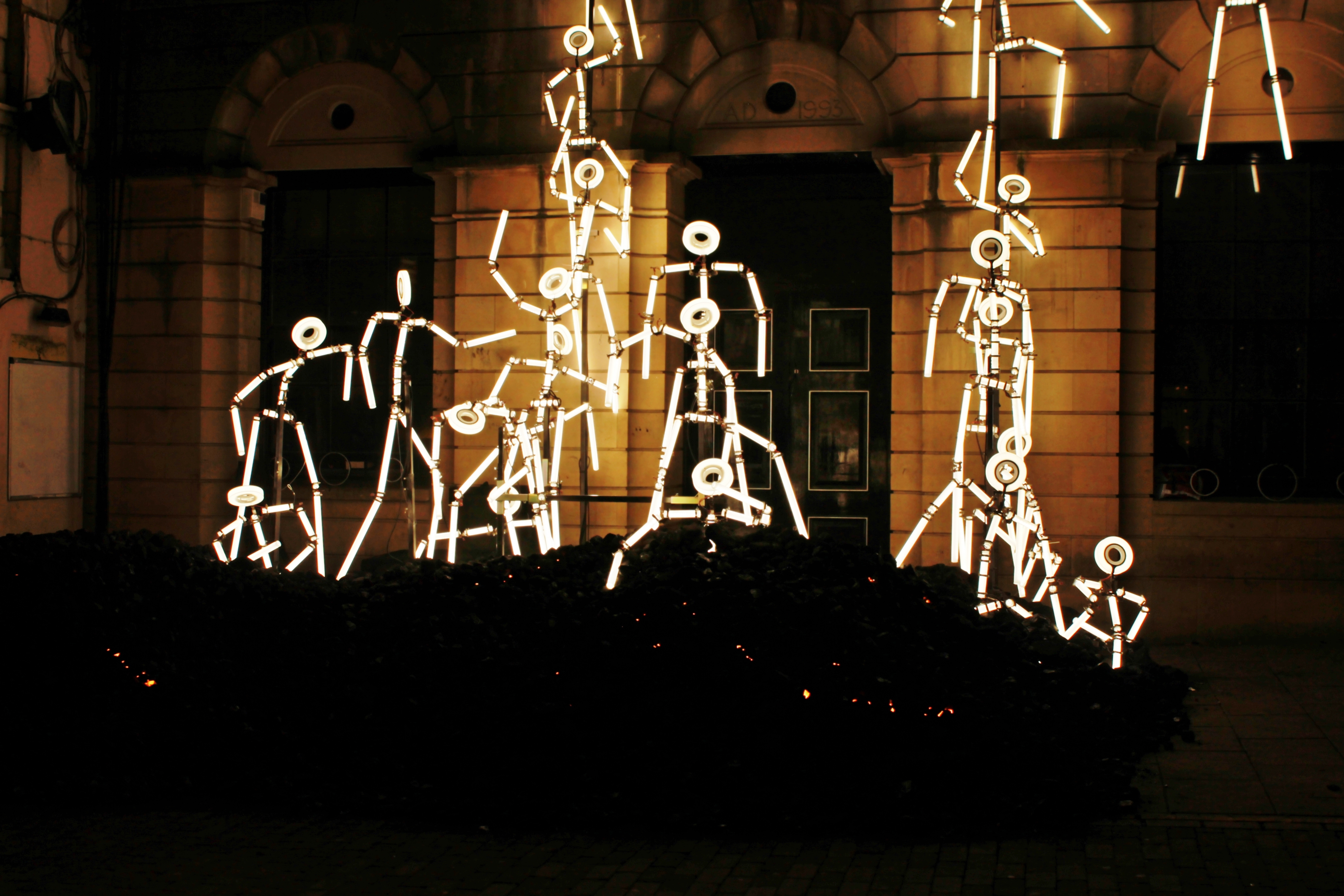 This artwork saw a collective of five artists based in France come to Durham, take over one of the more hidden architectural features of its landscape and put their own irridescent spin on the rich mining history that permeates the city, embodied in North Road’s Durham’s Miners Hall.

And so this relic, having assumed many different roles over the years and known to the student population as the location of Studio nightclub, found itself invaded by 80 sprawling stick figures made from LED tubes. These ghostly representations of the miners of Durham’s past utterly absorbed the gathered crowds as they gradually reappropriated the symbol of their community and heritage, and began to boogie…to the Durham County Youth Big Band’s rendition of ‘Working in the Coalmine’ by Lee Dorsey.

Glaswegian artist Nathan Coley was shortlisted for the Turner Prize in 2007. Six years later, his light installation soared above the shuffling masses in their passage onto Saddler Street and the Bailey, during the Lumiere festival. This piece seemed to strike, for the most part, as rather incongruous within a North-East English environment. And yet, as we carry on in our lives in 2013 – the 12th anniversary of 9/11 – the testimony behind the artwork, that of a young woman in New York in the wake of the tragedy, prompts us to reflect on our individual understanding of the events within our own contexts, from our personal perspective – be it religious, spiritual or rational.

Red pillars of the British urban environment, increasingly defunct and abandoned by the mobile-phoned masses of our 21st century technophile society… one treasured telephone box was, in Durham’s very own Market Place, transformed into a most aesthetically convincing prototype for its renovated use…

…leaving festival visitors of all ages wide-eyed, mesmerized by the phenomenon.

There’s more to what meets the eye. Gina Czarnecki’s ‘I’ used large-scale projections of iris scans from members of the public to create a contemplative interface saturated by the themes of identification technology, medical imaging and social interaction.

Click here to see an interview with the artist herself: .

Did you discover all twelve neon birdboxes, nestled amongst the trees of St. Oswald’s Churchyard? Audiences were lured by the sound of human-performed birdcalls to discover the hidden artworks illuminating the designated wildlife sanctuary. The artist hoped that the birdsong of her creation would ‘remind us of spring, giving us hope for the future and the end of winter’…

One of three neon proverbs of the past, written in the hand of the artist’s five year old son. Beth J Ross’ commission was one of four successful entries into this year’s BRILLIANT scheme, a renewed initiative that invites those artists currently residing in or originally from the North East to submit their own light-based artistic projects.The artist discovered these poetic sayings, still resonant today, within a manuscript belonging to Durham Cathedral Library.