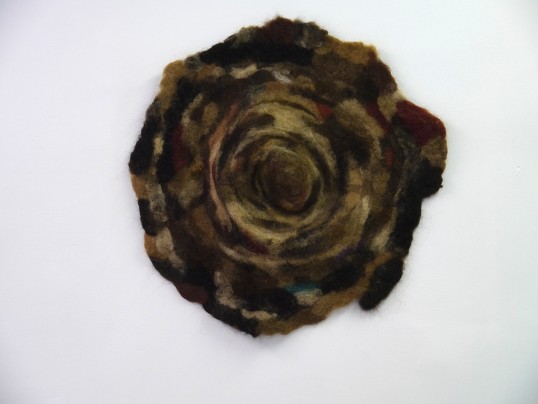 Follicle, signifying ‘a tiny hole in the skin from which a hair grows’*, is the title of Gina-Maria Marchella McCarthy’s first solo exhibition which recently took place in Durham’s Empty Shop gallery. The title couldn’t be more apt: on one hand, it refers to the artist herself as she attempts to push through layers of social taboo like dead skin as a way of breaking into the creative industry; on the other hand, human hair is one of her primary mediums. Despite being in her early twenties, McCarthy’s daring artwork penetrates the dark mysteries embedded in everyone’s imagination, in some form or other. These include death, sleep, sex, relationships, and the body. During our meeting, we discussed her artistic roots and what propels her to keep creating.

Hello Gina-Maria, it’s a pleasure to speak with you. Firstly, let’s hear some reflections on Follicle. How did it go?

The whole set up and preview went smoother than I could have hoped. I’ll always worry about whether people will turn up to these things, I guess because it’s the one thing you can’t control…It was so amazing being able to see my own work in a space by itself, not having to contend with or coordinate with another artist’s work. 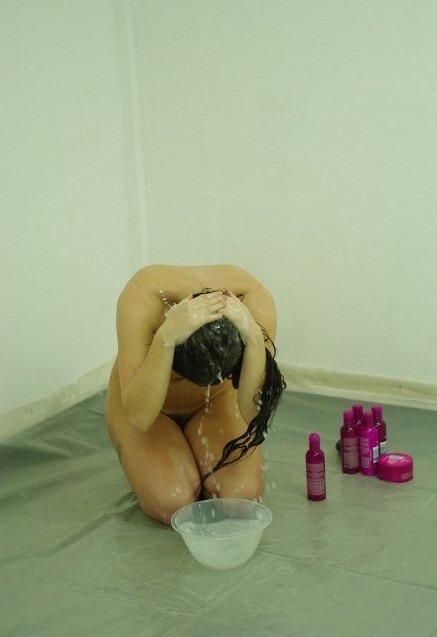 Not to mention that Empty Shop is a cavernous gallery so it’s quite something to practically have it to yourself! Incidentally, did you plan to hold Follicle there from the outset?

I had the idea to create Follicle before I knew where it would belong. I had these new ideas and pieces that needed to exist, and the nature of performance work is that without the space or the audience, these pieces remain ideas. Being new to the area there were a handful of spaces I knew about, but I was lucky to be passed onto Empty Shop by The Holy Biscuit (a contemporary gallery in Newcastle). The space is so perfect and aesthetically works really well with my work. I’m very grateful to have been able to work in this sort of space and with such wonderful people.

What about the curation aspect? It must be necessary to adopt a DIY approach.

I’ve always loved curation. It’s such a crucial part of art practice and it’s so easily overlooked. […] I take my time and consider curation from various angles: practical, aesthetic, functional. I also consider the curation of my self, where will I be in the space, where will ‘me’ performances exist and how will I shape my body within that space. 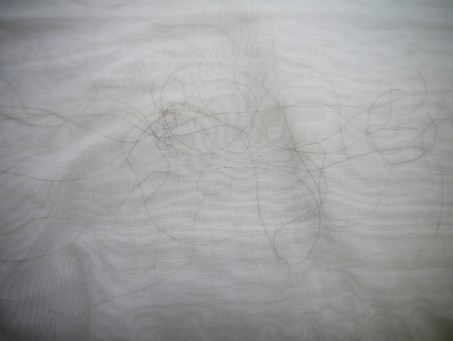 Let’s talk now about ‘Died In Her Sleep’, a minimalist yet poignant piece. Shakespeare alluded to sleep as ‘death’s counterfeit’ and many other thinkers have made this connection. As a child you experienced burgeoning premonitions of imminent death before you went to sleep – ‘I would feel that night would be my last […]. Part fear, part longing’. It’s a controversial topic but undeniably most people will have experienced something similar, hence the universal ‘death drive’ advocated by some psychoanalysts. So could you tell me more of the personal story behind ‘Died In Her Sleep’?

Death is something that I obsess over on a regular basis. I fall asleep wondering if tonight will be it, I wake up surprised it wasn’t, the cycle continues. So it felt natural that this subject would find its way into my practice, I was just waiting for it to. ‘Died In Her Sleep’ came about quickly through my collecting of the hair I would lose in my sleep, I was losing a lot more than usual through suffering depression and the stress it put my body under. I guess I used my artwork (namely ‘Hair Piece’) as an excuse for these morning collections, but I was really sad about losing so much hair I found it hard to brush them to one side. I realised the connection between the loss of hair and my life long obsession with dying in my sleep one morning and it just felt right. I think the simple aesthetic works so well because it doesn’t over complicate; like you say, it’s something most people have thought about and continue to think about, so the simplicity of the piece coupled with the title makes it relatable. A friend of mine recently commented on my description of the nightly hair loss as ‘small deaths that happen on a nightly basis’ and took that to be a direct English translation of the French euphemism for orgasms, ‘la petite mort’. It made me smile and I loved that someone could see something so joyous and sensual in a piece with such stark origins.

At the moment you seem captivated by human hair and its versatility as a signifier, evoking ‘loss, life cycles, love and the bodily’. What first triggered this foray into human hair as a medium? Has it proved difficult to procure?!

I’m a hoarder… and opportunist. I have always loved hair, I don’t doubt that I always will, but I guess what triggered my inclusion of it in my practice was seeing so much potential in this bodily object we lose so much of and not wanting to get rid of it. I tend to see something in an object – a material or an idea – and I don’t fully understand it myself until I make some sort of progress. I hold onto an idea or an object until it’s/I’m ready, whichever comes first. It just turns out I’ve seen a lot in hair, and I’m not done just yet.

Are there any other unconventional mediums – bodily or otherwise – that you would like to experiment with in the future? An artist I interviewed last year used children’s milk teeth in one of her sculptures, for instance. Are there any limits?

I am eager to return to using sound in my work. I worked on a subtle piece called Breath (available for download on my website), and although that piece is finished, I have never felt done with that area as a whole. At the moment I have a few ideas in mind that directly link to my body and double up as live performances but that’s all I can really say about those pieces for now! I am also really toying with ideas surrounding pubic hair, but it’s very hard to avoid the standard, ‘angry-feminist’ clichés when dealing with ‘pubic rights for women’. There is a quietness to my practice that I would love to bring to this controversial matter but I’m unsure where it’s taking me or where to take it at the moment.

Finally, what has made you stop and think recently?

I think about pubes a lot. I think about death a lot. But neither make me stop, they both propel me forward. Overhearing steroid-fuelled Geordie lads openly say they would dump a girl if she had pubic hair, now that stops me in my tracks and really gets me thinking…