Life Through a Lens: Gordon Parks and Thom Davies 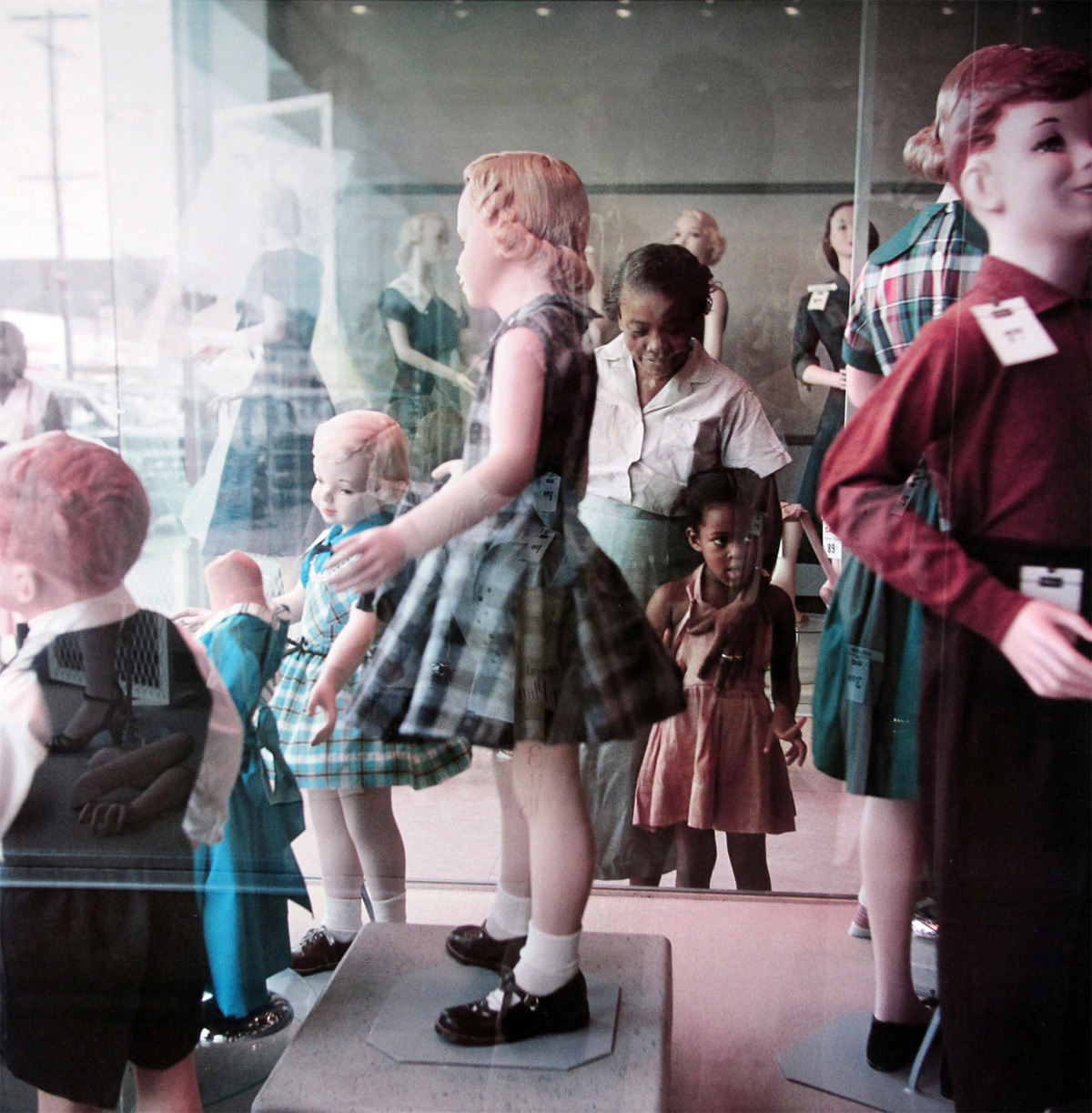 Ondria Tanner and Her Grandmother Window-Shopping
Photographed by Gordon Parks, 1956

This image was captured by ground-breaking American photographer Gordon Parks for a Life Magazine photo-essay, “The Restraints: Open and Hidden”, which portrayed the everyday lives of an extended black family under Jim Crow segregation in the Deep South. The series presents a significant contrast to traditional civil rights photography in terms of subject matter. Parks was not interested in provoking public outrage by depicting racial murders and police brutality; he sought to delve deeper, evoking empathy by capturing the most ordinary of people, living the most ordinary of lives.The above photograph encapsulates this perfectly. A small girl stares, awe-struck and longingly, into a shop window paradise of beautiful dresses as her grandmother, barely concealing her amusement, attempts to drag her rapt attention away. The image is simple but heart-warming and reflects a scenario with which every one of us is familiar. We can all relate to that unquenchable, childlike fascination with all things forbidden and, like the grandmother, know the pleasure of being reminded how the world appears through a child’s eyes. In this sense, the image is universal.

Taken in context, however, the photograph is a disconcerting representation of Jim Crow society. The sea of alabaster-white mannequins, plastered with unseeing eyes and false smiles, almost drown the young girl and her grandmother. The glass window which separates them is the ultimate symbol of segregation; Ondria Tanner can look through, driven by her childhood curiosity and impulsive attraction to the unknown, but the world on the other side is perpetually beyond her reach. Her grandmother, briefly reminded of an innocent mind’s capability for hope, smiles ruefully in the knowledge that such a blissful state cannot continue indefinitely.

In capturing the nuances of everyday life, Parks was able to undermine the fundaments of segregation by blurring the clearly demarcated parallels of white and black America. The power of the photograph lies in our perception of it. Parks relies on us to simultaneously sense familiarity and disorientation, universality and isolation. It evokes empathy and understanding along with disdain for the enforcement of the artificial barrier of segregation on an organic, human society. In 1956, the Civil Rights Movement was still in its infancy. The Montgomery Bus Boycott was underway but change was tentative. Over the coming years the movement would grow in support and confidence, permeating all levels of American society to create a world without limits where curious children no longer had to be satisfied with standing on the outside, looking in. 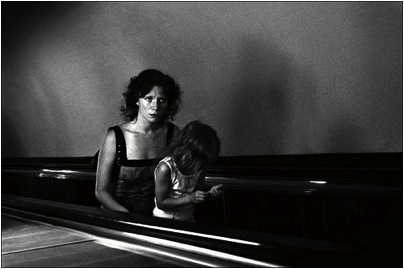 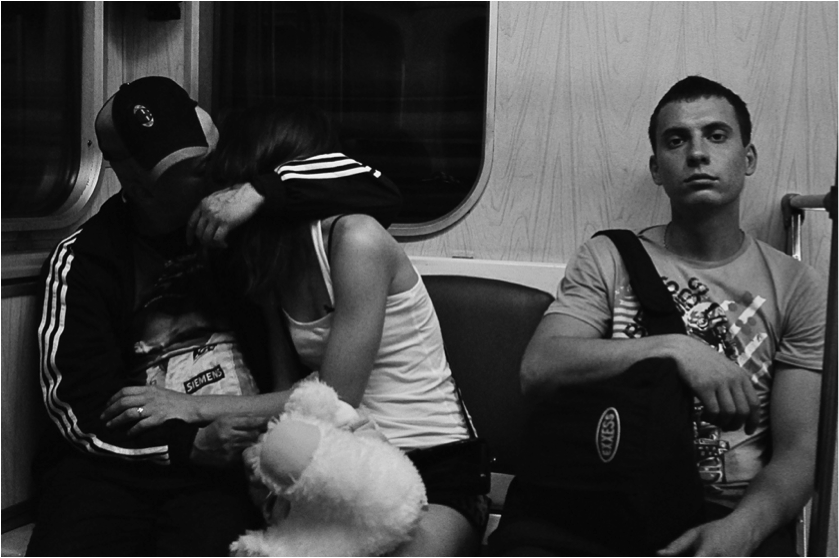 The above photographs are taken from Thom Davies’ ‘Everyday Life’ collection, part of the Guardian’s ‘Photographing a Journey’ assignment. The images are of the Moscow metro, a deep system of underground palaces inhabited by a motley crue of those unable to afford the luxury of sitting for hours on end in snaking, above-ground traffic jams. Having spent my Year Abroad living and working in the Russian capital, this collection particularly resonates with me. The city’s underground network is one of the most heavily used in the world and as such is a mainstay in the lives of a broad spectrum of the population. The daily metro journey provides a snapshot of ordinary life, conducted in the magnificent surroundings of Moscow’s historical metro stations. It is a constant source of fascination and entertainment: old women in headscarves battling for seats, teenage sweethearts stealing a kiss away from the gaze of overbearing parents, the homeless who ride in circles until the early hours, conspicuous by the disdainful distance kept from them by other passengers. Taking the metro is more than travelling from A to B; it is a journey through the many and varied quirks and idiosyncrasies of the Russian people as they go about their daily lives.

These photographs encapsulate the essence of the Moscow metro in a way that words simply cannot. The high contrast of the black and white composition imbues them with a gritty timelessness befitting a system which has remained a constant for Muscovites through terror, war, stagnation, perestroika, collapse and beyond. The exclusively human focus of the photographs is also a powerful device in representing the metro a vein running through the collective experiences of the last century. Were it not for the subjects’ modern clothing, the photographs could almost have been taken at any point in the last eighty years, giving rise to the question as to whether, below the surface of shifting political and economic paradigms, the people have really changed at all?

The photograph entitled ‘Mother Russia’ is perhaps the most powerful of the collection. Its depiction of a mother and daughter on the long ascent to street level is so simple; however, its impact is intensified by identification with the transcendental figure of ‘Mother Russia’, or Rodina Mat’, the national personification of Russia which emphasises the spirit of collectivity, nurturing and protection. The woman’s penetrating stare, the unavoidable focus of the photograph, seems a heady mix of fear, suspicion and the protective maternal instinct. It is as though, as a mother, she is bearing the weight of the world on her shoulders in order to preserve her child in a bubble of blissful unawareness. The young girl’s headphones, allowing her to retreat from the grimy reality of the underground, seem an apt metaphor for this sheltered existence. The image perfectly conveys a uniquely Russian conception of childhood and motherhood that has developed over the past century. Having lost generations through purges and war during the twentieth century, and with life expectancy hovering around just sixty years for men, new life is sacred. Idolisation of children is institutionalised and they are often considered the nation’s most valuable resource. Motherhood has become synonymous with the nation’s future, explaining Davies’ identification of this woman’s defensive maternal instinct with ‘Mother Russia’.

The photograph ‘Everyday Life’ is arguably not as rich in symbolic significance but is, nonetheless, a fascinating documentary view of social norms in the capital. The young man’s gaze is direct and horizontal, seeming to meet ours at eye level, which gives the distinct sensation of being situated within the cramped metro carriage. Accustomed as we are to a culture that shies away from displays of open affection, it is impossible not to feel awkward upon first viewing the photograph. Against our own will we are posited as intruders upon what ought to be a private moment. Try as we might, there really is nowhere else to look. This feeling dissipates, however, as our focus lands on the young man. Apparently unperturbed by the couple, his body language suggests a deliberate demarcation of his private sphere. Despite the proximity between them, they are essentially existing in entirely separate worlds. The Russian tradition of communal living along with the logistical issues of cramming a population in excess of twelve million into a jungle of high-rise apartments has brought about this ability to maintain a clearly define private life within the framework of unavoidably exposed public existence. As such, Davies’ collection perceptively defies the façade of collectivist spirit that has long been associated with Russia by observing and representing people’s innate ability to shut themselves off from what is happening around them and ensconce themselves in their own personal world. The conclusions that can be drawn from applying this to wider Russian society are compelling.

To see more of the collection, visit: http://www.guardian.co.uk/artanddesign/gallery/2012/may/10/photography2