Joan Miro: The Ladder of Escape 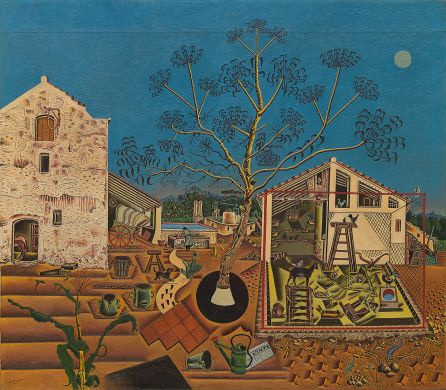 Until January, the Tate Modern in London will be celebrating the life and artistic development of Joan Miró, the 3rd most famous Spanish artist after Dalí and Picasso, exhibiting some of his most prestigious works, including The Constellations. Miró has often been labelled as the best surrealist painter of all time, earning the highest praise from the leader of the Surrealists, André Breton, who deemed Miró ‘the most surreal of us all’. Renowned for his iconic, cartoon-like paintings, his designs are seen everywhere, from the omnipresent La Caixa Bank logo in Spain, to a Google logo and numerous sculptures scattered across the globe in places as varied as New York and Paris. Born in Barcelona, his artistic career started when he enrolled in the Cercle Artístic de Sant Lluc, of which the legendary Antoni Gaudí was a member. Nevertheless, despite his Catalonian background and education, he is known as one of the greatest Parisian artists, having moved there to develop his interest in surrealism. The exhibition demonstrates dramatically Miró’s shift in style through his eventful 90 years and his inimitable way of portraying his Catalan identity and struggle throughout the Spanish Civil War through his surrealist style. For surrealism fans like myself, this experience will elevate you into his world of clouded reality. As for the sceptics, this may in fact make you rethink your views on Miró, and surrealism in general.

The exhibition starts with his early Catalan paintings of rural landscapes and ideals. Born in 1893 in Barcelona, his love and attachment to his birthplace is visible in his warm paintings, which display the rich culture of Miró’s upbringing in Spain. It is possible to see the influence of Fauvism in his early paintings, with their bright primary colours, for example in Nord-Sud (1917), echoing artists such as André Derain and Vincent Van Gogh. Nevertheless, his brief spell with Fauvism and Cubism did not last long, and his artworks soon started to become much more individualistic. His style evolved very quickly, with traces of his surrealist influence visible as early as 1921, in paintings like The Farm (1921–2) and The Tilled Field (1923–4), where proportion and perspective started to become distorted.

Within the space of a year or two, his style became even more unique and distant from reality, and this was without a doubt due to the publication of Manifesto of Surrealism by Andre Breton in 1924, and Miró’s move to Paris. The focus of his works, however, still stayed rooted in his Catalan upbringing, as exemplified in the exhibition. For example, The Head of a Catalan Peasant (1925) is a self-portrait where his facial features have become ambiguous and barely recognisable. Everything is phantasmagorical, with the only recognisable feature being the red barratina cap, omnipresent in Miró’s works from this decade, symbolising his support for Catalan nationalism. The painting also shows the transition towards Miró’s characteristic pictorial paintings.

For the next decade, Miró experimented with other media, from pastels and drawings, to collages and copper and masonite, examples of which are displayed in the exhibition through several different rooms. However, it was in 1936, when the Spanish Civil War erupted, that Miró produced his most personal and spectacular works. Although in exile in France, the Civil war remained the sole focus of Miró’s work. Some pictures are uncomfortable and disconcerting to look at, displaying passive violence and disjuncture, revealing the political turmoil in Spain and the physical and emotional trauma going through Miró’s mind. Most striking is Miró’s piece, Untitled (Head of Man) (1937), which draws a strong resemblance to Picasso’s Guernica (1937) depicting the civil war. The political influence in Miró’s works did not cease after the Civil War, but continued, with his works lamenting and mourning over those who lost their lives. On display in the exhibition are the Barcelona Series (XVII) (1944), a collection of 50 lithographs depicting a series of grotesque looking people (some intended to be dictators), contorted, raging bodies and victims of the war.

Perhaps the parts of the exhibition that have been most critically acclaimed are the five triptychs, colossal in size but evoking a peculiar sense of calm. On display in vast hexagonal rooms, it is possible to totally lose yourselves in these simple minimalist paintings, removed of the clutter and eccentricity of Miró’s other works. However, the highlight of the exhibition for me were Miró’s Burnt Canvases (1973), two paintings suspended in the middle of a room, the canvases of which have been burnt so you can see right through them and either side of them. Once again, these pieces have political undertones, but they stand out in the exhibition, as a more 3D method of painting, showing Miró’s striking and raging imagination.

Miró’s artwork isn’t to everyone’s taste. To those who don’t know much about him, he may be thought of as too childish, lacking substance, subject matter and, indeed, talent. However, I think this exhibition will gain Miró, and fellow surrealists, more respect and some new admirers. It’s impossible not to be impressed or overwhelmed when walking round ‘Joan Miró: The Ladder of Escape’. It reveals the awe-inspiring and fantastical world that Miró lived in, torn between his Spanish roots and Parisian inspiration, and stricken by the Spanish Civil War, a constant theme in Spanish surrealist work. The exhibition itself draws you away from reality and the prosaic dreariness of city life, up the ladder to another chimerical world of synaesthesia, a cacophony of colours, sounds and striking scenes where all senses are distorted. If possible, try and see the exhibition: not only will Joan Miró’s work open your mind to the struggle Spaniards went through in the mid-20th Century, but it will demonstrate the very best of the Surrealist movement, through an unbelievable journey of creativity, pain and self-discovery.