Interview with artist behind “I” at Lumiere 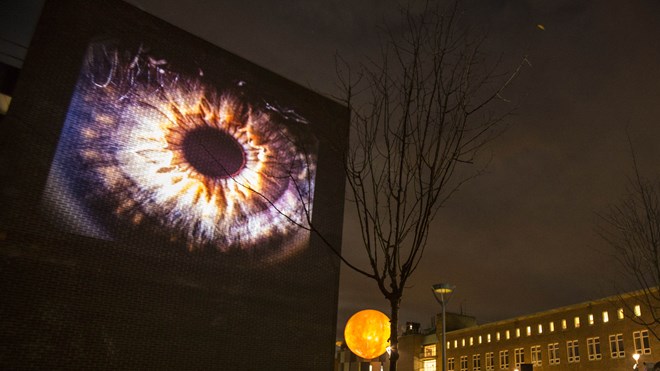 Czarnecki’s “I” at Lumiere

A striking leitmotif of Gina Czarnecki’s work is an insistence on how human beings perceive disease and decay, above all through the intermediary of scientific and technological developments in investigation and image production.

If you’ve been fortunate enough to see her “I” at Lumiere, a large-scale projection on the side of the Bill Bryson Library involving live iris scans from members of the public, then you will have identified with this powerful theme on one level or another. There are myriad underlying, interlinking levels and sub-dimensions to Czarnecki’s work, as I was intrigued to uncover during our interview, in which we traced the evolution of “I” back through a causal network of artistry, ethics and bureaucracy.

The organisers of Artichoke, the charity that organizes Lumiere, were long-admirers of Czarnecki’s “Spine”, a 12m high projection on to the Civic Centre in Newcastle with images of contorted dancers compiled to evoke anatomy as the surface impression, and so they contacted her about creating a new installation for Lumiere. As much as the artist dislikes the term “public-engagement”, she knew that this is what Artichoke is renowned for. So she revealed to them a latent idea she’d had “for quite a while, of a big eye, not in terms of a surveillance eye, but as a point of engagement”. 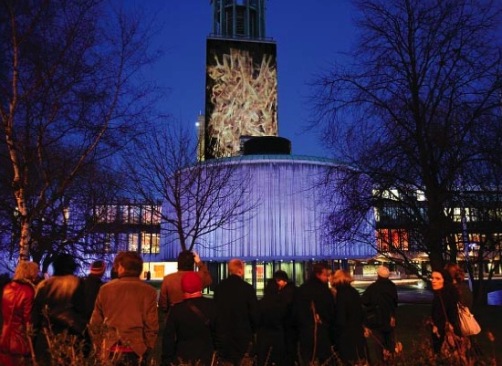 Czarnecki elaborates that the idea stemmed from an interest in our “changing understanding of “fail-safe” identification technologies […] and the possible ramifications for those opting out. The intention was to provide a game interface with serious undertones about identity recognition and data retrieval/storage systems and ownership. I wanted to combine this with biomedical imaging and what can be detected through looking at and into the retina/iris and the two-fold information this provides – the vessels [in the eye] are representative of other vessels in your body but you can see these non-invasively. I am also interested in the increasing frequency of non-physical meetings, where you cannot sense the chemistry of the person or see ‘them’ without a technological interface.”

The project clearly had ambitious aims from the outset. In order to realise it, Artichoke facilitated a collaboration between the artist and Durham’s own Professor of Physics, John Girkin. In my meeting with the latter, he detailed the complex logistics of bringing “I” to life. In terms of funding, they were successful in their application to the Wellcome Trust for a grant for an outreach project. Then there were ethical obstacles to overcome, because “technically”, the physicist explains, “we’re recording data on a person”. Originally intending to take down people’s email addresses so that they could send them their unique iris scan, they decided against this and so avoided opening a can of worms by keeping the data, which is only recorded temporarily anyway, completely anonymous. 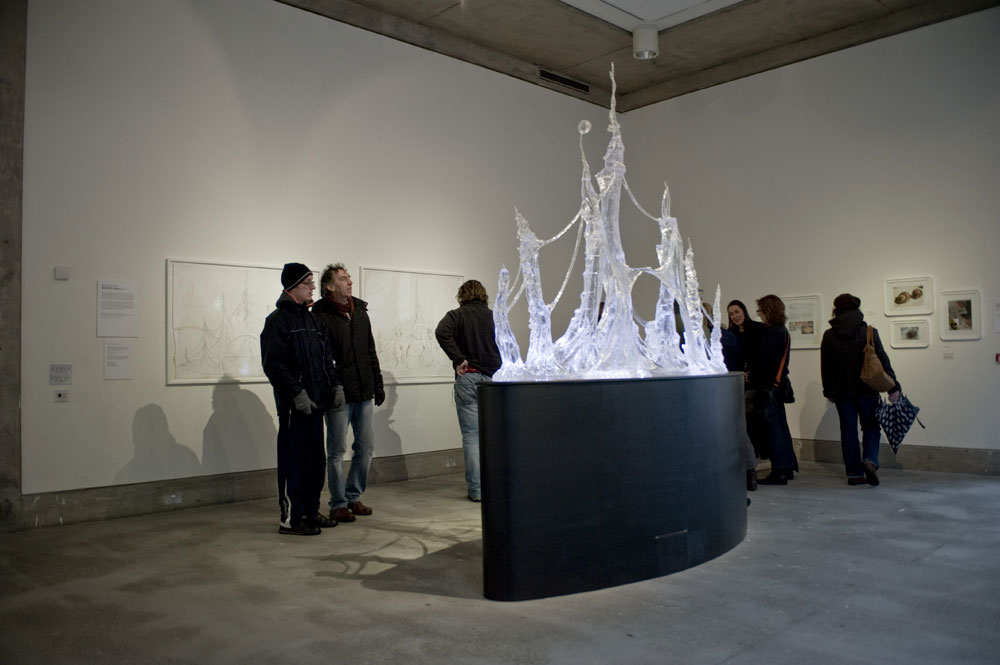 Through previous projects, Czarnecki has discovered that people are “terrified of biological identification”. “Palaces”, her hauntingly beautiful crystal resin sculpture inlaid with children’s milk teeth, proved to be an “ethical minefield” with a number of hoops to jump through. It was also necessary to design a way to obtain the donated teeth without shattering the tooth-fairy myth; “tooth-tokens” left under the pillow provided the solution. The piece certainly encapsulates that shift in consciousness we experience when something you once believed to be a truth turns out to have no basis in reality. Czarnecki says that as you go through life the wool is continually stripped away from your eyes, it doesn’t end when your seven-year-old self cottons on that the tooth-fairy is in fact a sneaky parent, citing the Murdoch Scandal as a prominent example. For this reason, she originally wanted to use glass for her medium, for its fragility and illusory appearance (is it a solid or a “super-cooled liquid”?) but had to settle for crystal resin to meet health and safety regulations. The crystal resin, in my opinion, creates an illusion in itself because the onlooker immediately assumes they are looking at glass. It is still an amorphous material and, while it is transparent, it still causes refraction and therefore a deceptive picture of the world, and can be stretched to form a sinewy texture, which Czarnecki furnishes was itself inspired by the swirling insides of witches’ balls, introducing yet another layer, one of spirituality.

“Palaces” is currently on display in the Science Museum in London, creating a poignant duality of a “palace within a palace”, Czarnecki muses. She knows that children won’t get the bigger references, but she hopes their parents will. Like “I” and its “game interface”, “Palaces” uses childlike, playful aesthetic beauty to draw onlookers in. “If I put teeth in a pile”, she says, “it would look like a concentration camp piece – I didn’t want children to think that”. Of course, the deeper meaning is about “the value of human life and who is entitled to make those value judgements”, but people can engage with her artwork as little or as much as they want. Although she did make a conscious decision to show “Palaces” alongside chandeliers made from human femurs and chairs stuffed with human fat. 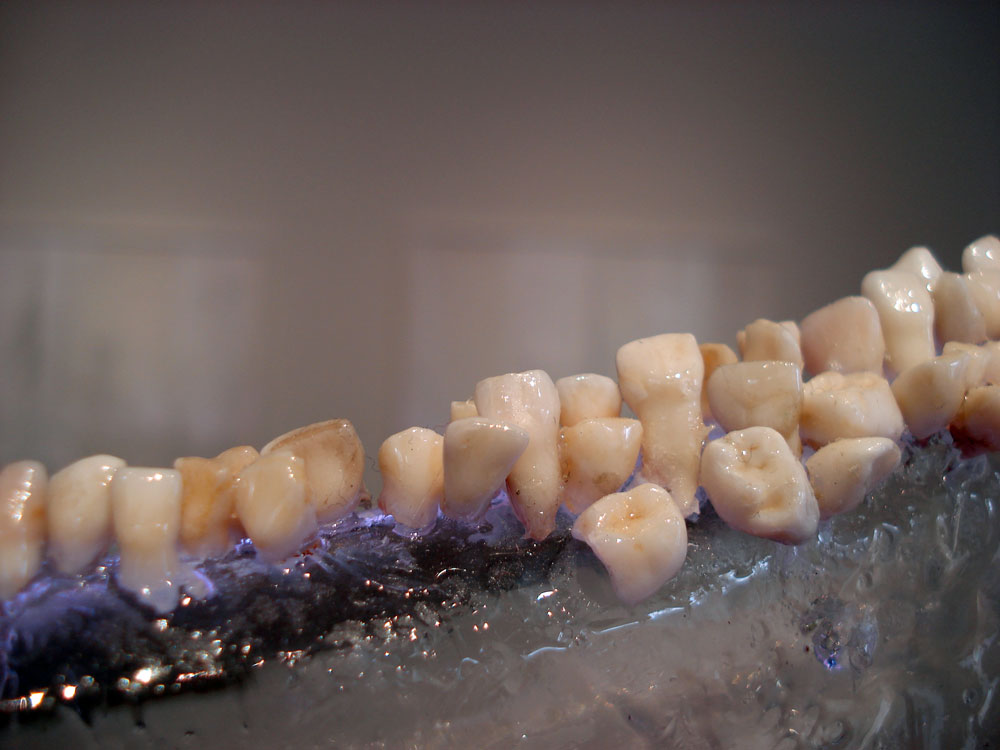 Looking to the future, I posed the question “Do you think Art and Science are converging more these days?” to which she responded that if there is a coming together, “it’s about people, not about disciplines; creative investigation applies to many areas of life”. Maintaining immutable boundaries between the disciplines means that you limit yourself; “by “owning” the creative sphere, you’re not doing it any favours”, hence her constant endeavour to help people appreciate the relevance of Art in everyday life. Besides, Art can make scientists’ work more accessible, which is becoming increasingly crucial in order to obtain funding. Professor Girkin used the term “subliminal science” in reference to a previous project he was involved, which secured sponsorship from the British Heart Foundation, where an Edinburgh-based artist took DNA traces and manipulated the images.

“I” is irrefutably captivating. As Czarnecki puts it, “eyes are like landscapes”; they have depth, they have [hi]story. I learned at a recent talk chaired by Czarnecki, entitled “The I and Lumiere”, that the proteins in our eyes have remained the same since before we were born. And I can’t tell whether it was due to insightful or serendipitous programming, but Hemmer’s “Solar Equation” is perceptible in the distance as you gaze up at “I”, aligning the microcosmic with the macrocosmic, inviting you to contemplate your place in the universe. Personally, I believe that being on the side of the library imbues “I” with an unforeseen significance for us students as we have to scan an identity card in order to enter this otherwise sealed off locus of extensive knowledge. Who knows, in the future this technology may be replaced with an iris scanner.