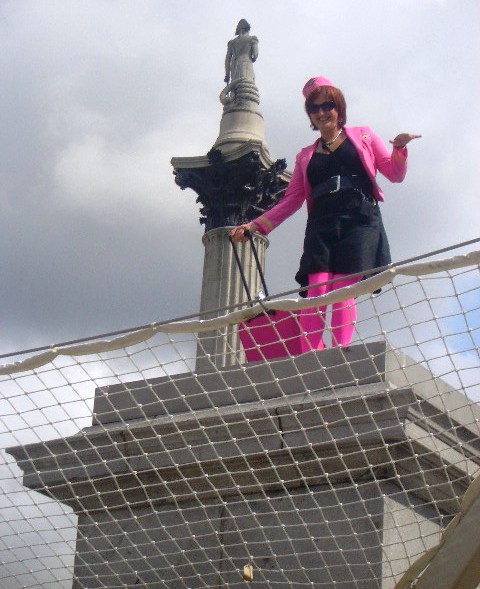 Karen Ogilvie in “One and Other”

It is eight o’clock in the morning on Thursday 10th September 2009 and I am being lifted into the sky, high above Trafalgar Square, by a JCB forklift truck. The man with me wishes me luck as I swap places with the participant before me and then drives away, leaving me stood alone on the Fourth Plinth, ready to spend an hour in any way that I choose.

For this hour I was part of Anthony Gormley’s living work of art One and Other. For one hundred days between July and October Gormley, famous for his works based on the human form which include The Angel of the North and Field for the British Isles, randomly allocated people for one hour slots to occupy the Fourth Plinth in Trafalgar Square alone, night and day, come rain or shine. Each person’s hour was theirs to do anything and everything they wanted to: a portrait of modern Britain. This piece of art was commissioned by the Mayor of London who has been filling the previously “empty” plinth since 1999 in an attempt to bring art and debate to the Capital’s landmark. In recent years it has been occupied by different works of art ranging from the widely disliked Model for a Hotel by Thomas Schutte to the controversial sculpture Alison Lapper Pregnant by Marc Quinn.

Having applied online, never thinking that I would be successful, I was randomly selected for the 8–9 am shift and much discussion ensued amongst friends about what to do, ranging from suggestions favouring setting a new world record for the number of Wispas eaten in an hour to learning to unicycle in my time up there (to which my response was that I did not want to be the first person to fall off the plinth!). Finally I decided that I would start the hour as a “blank canvas” wearing all white clothes and as the time progressed I would paint a design over myself. What followed was one of the most fun hours of my life!

I was very lucky that it was a beautiful morning and it was an incredible feeling to be high up in a space that so few will ever occupy with the sun slowly rising over the London skyline, light spreading across the square and shining through the fountains. It was also extremely peaceful as I sat and began to paint whilst watching the busy day get started. Tour buses honked and got me to wave at them, the steady stream of business men and women flowing past smiled, waved and took photos, the few friends and family members I had watching from below spoke to me every now and then, but mostly it was just fantastic to feel so relaxed and high up, just watching the world go by.

Other “Plinthers” covered everything you could think to do with their hours: Many sat and read books, a variety of things were done in the name of charity, most prominently a campaigner for the release of a woman on Death Row in America created a lot of media attention in support of his cause. I saw Morris dancing at 3am, “The Plinth Olympics” (my own personal favourite) where a man got masses of people to compete across Trafalgar Square in slow-motion running races and “invisible” curling, frequent nudity and even live beekeeping graced the plinth! Information about the project can still be viewed online at www.oneandother.co.uk and if you click on ’Plinthers’ you can watch any specific hour from the hundred days, including mine. The project is also being packed with a book to accompany it and the archive of film is being prepared for exhibition.

But is it art? The question that has always plagued modern art has never been more applicable. It was widely discussed across the media with some calling it reality television rubbish and simply an extension of Speaker’s Corner whilst others applauded Gormley’s innovation and the opportunity for any type of person to be able to represent themselves for an hour in front of the world. Having seen how much discussion is evoked by every different action taken on the plinth, how a single hour can be interpreted and explored so differently depending only on the time of day and a different individual, how it encouraged those in Trafalgar Square and watching on the internet to talk to one and other, it is hard for me to see it as anything but art. One And Other was a truly unique work of art, meant to encourage diversity and debate and I for one had a blast being part of it.