How to Experience the Artistic Marvels of Rome – Without Spending a Single Cent!

Before embarking on my first visit to Rome I thought a Friday to Tuesday trip would give me more than enough time to get around all of the city’s most famous sights and to be able to peruse several of its many notable art galleries. It turns out that I massively underestimated how much there is to see in Rome and the time taken to see each attraction! By my second day I knew that I wasn’t going to have much time to visit as many art galleries as I had planned, let alone all of them, but I soon realised that there were so many other ways to experience the incredible art and architecture of Rome which don’t involve queues or extortionate ticket prices. Here are just a few ways that you can enjoy the artistic delights of Rome easily and cheaply: 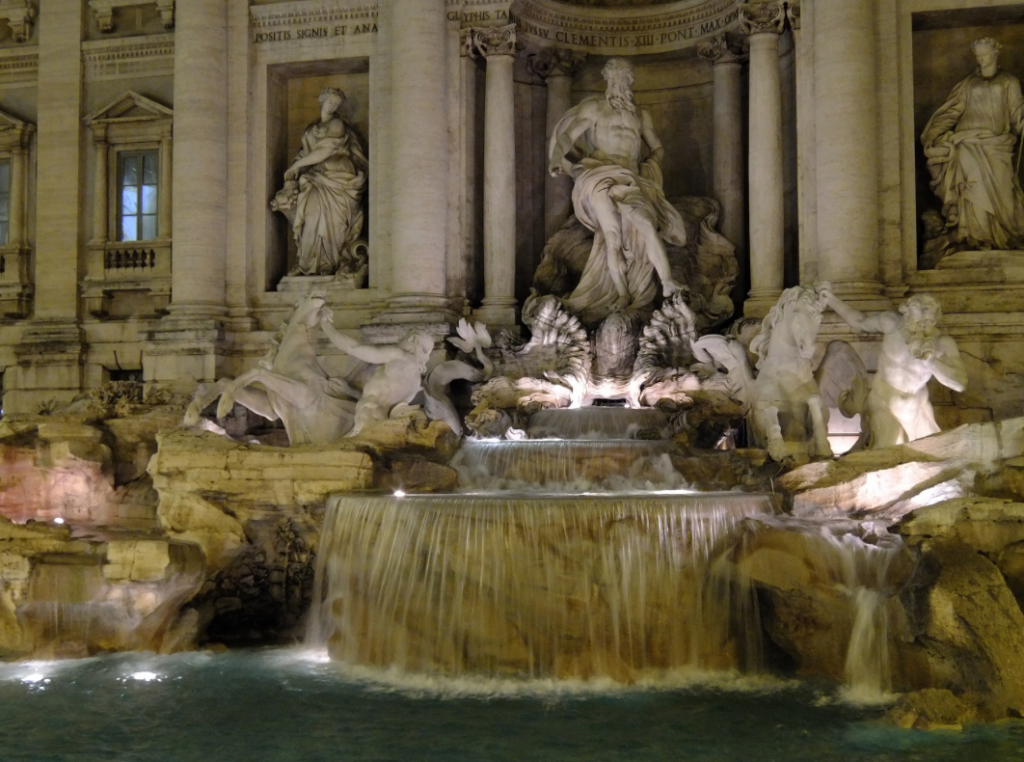 The Trevi Fountain by Night (Image: AHLN via Flickr)

As the Trevi Fountain is one of Rome’s most celebrated attractions, I knew I had to go and see it at some point during my visit. Fortunately, I got the chance to see it late at night when there were less crowds, letting us get much closer to the most famous fountain in Rome than the daytime would allow. The other benefit of visiting Trevi after dark is that you can admire the eighteenth-century sculpted masterpiece in illumination, the lights perfectly highlighting the enormous white Travertine stone sculpture which depicts the ‘taming of the waters’ from Roman mythology, featuring Oceanus as the central figure surrounded by Tritons and winged horses. Aside from being a much loved landmark, Trevi fountain is a magnificent example of neoclassical sculpture which you will want to visit over and over again. 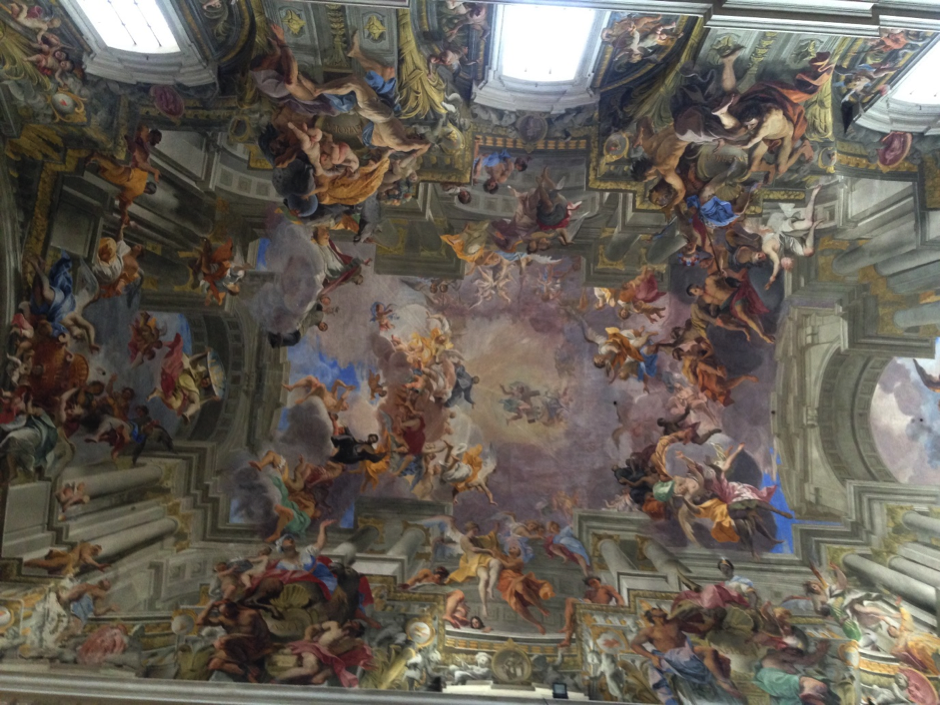 The Ceiling of Sant-Ignazio Church (Image: Writer’s Own)

2. Visit one of many churches

If you’re an art enthusiast the easiest way to view some of the most fantastic paintings that Rome has to offer is by dropping into one of its many beautiful churches. There are hundreds of amazing churches in Rome, many having been constructed in the Baroque aesthetic, with grand facades of ornate pilasters, reliefs, and sculptures. Sant-Ignazio Church, has an absolutely mesmerising painted ceiling which appears almost holographic when you gaze up at it. In particular, the glowing colour palette which is used to depict Heaven, along with the skilled painting of figures on the curved ceiling supports and at the centre of the ceiling make the sublime scene feel alive and animated. The Church of San Luigi dei Francesi is another fantastic church which is home to three incredible 3-metre-high Caravaggio paintings of 1602. The three paintings which depict the calling, inspiration, and martyrdom of St. Matthew, are excellent examples of Caravaggio’s unique utilisation of chiaroscuro, which works perfectly with the narrative of The Calling of St Matthew, to illustrate the light of Jesus calling him out of the darkness of his vocation as a mercenary tax collector. 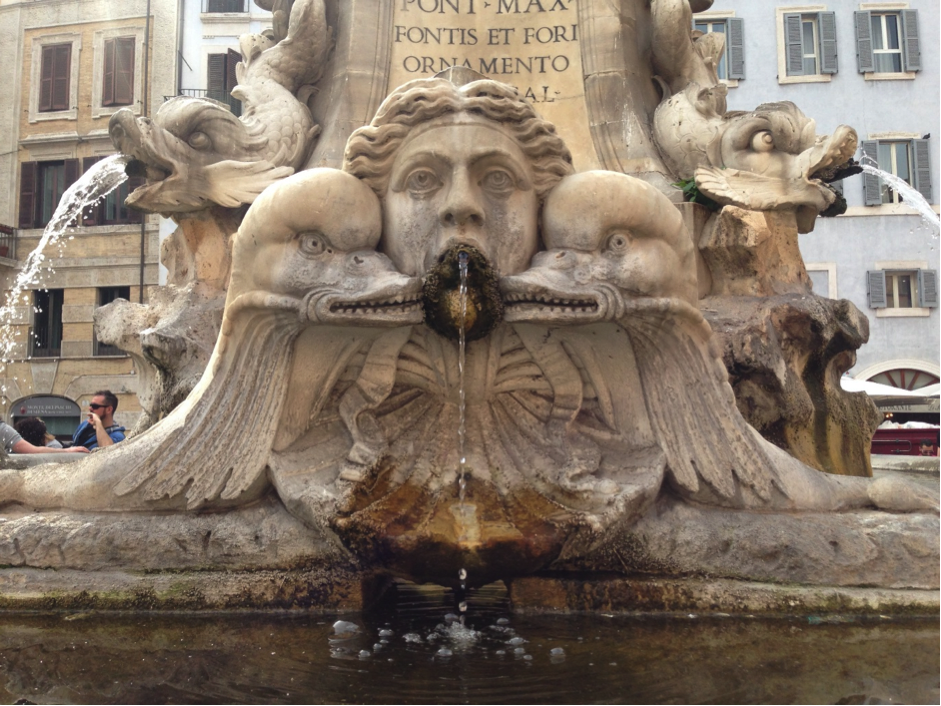 Detail of the Sculpture at the Macuteo Obelisk Fountain (Image: Writer’s Own)

Rome is famous for the stolen Egyptian obelisks brought to the city around 2000 years ago. While the obelisks themselves are historical marvels, the sculptured fountains on which they stand are equally fascinating to behold. One which caught my eye was the Macuteo obelisk, situated in front of the Pantheon. This obelisk, constructed in Egypt during the reign of Rameses II, is posited on a fountain designed by Filippo Barigioni, which features some very interesting – and quite creepy – sculptures of sea dragons, and also of human figures spouting water flanked by some fiercely-teethed mythical fish. The sculptures which adorn this fountain are fascinating inventions and are well worth a look if you’re stopping by the Pantheon. 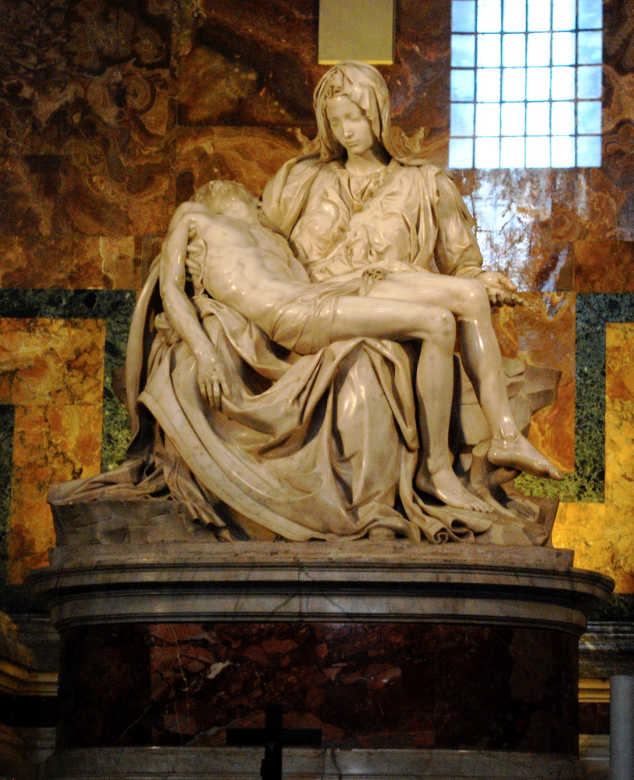 Visiting the Vatican is usually top of most tourists’ to-do lists when they visit Rome. Although we’ve all seen images of the exterior architecture of St Peter’s Square and Basilica, nothing can prepare you for what you’ll see inside. The interior of the Renaissance-Baroque basilica appears as though it is almost dripping with gold: the abundance of gold paint used to adorn the vast body of the church really does make the whole building glow and glimmer. St Peter’s Basilica also contains the work of two of Italy’s most celebrated sculptors, namely, Michelangelo and Gian Lorenzo Bernini. On your immediate right after entering the basilica is Michelangelo’s Pietà (1498-99), a Carrara marble sculpture depicting the Virgin Mary mourning over the dead body of Christ. Evidence of Bernini’s work can be seen all around the basilica also, most notably at the baldachin, a canopy over the papal altar, which is resplendent with Bernini’s characteristic contours and emphasis on minute and delicate details.

When you add up the cost of travel, food, and accommodation, even a short trip to Rome can end up being quite an expensive venture; fortunately, some of Rome’s greatest sculptures and paintings are completely free to the public and are situated at the heart of the city! All of the attractions listed here are free to visit and, with the help of a good map and the metro, are extremely easy to find. Rome is a great city for art enthusiasts, boasting everything from the Classical sculpture of Ancient Rome to a collection of Tracey Emin works at the Lorcan O’Neill Gallery, but even on a limited time and limited budget you’ll still be able to admire some of the city’s most brilliant works of art!