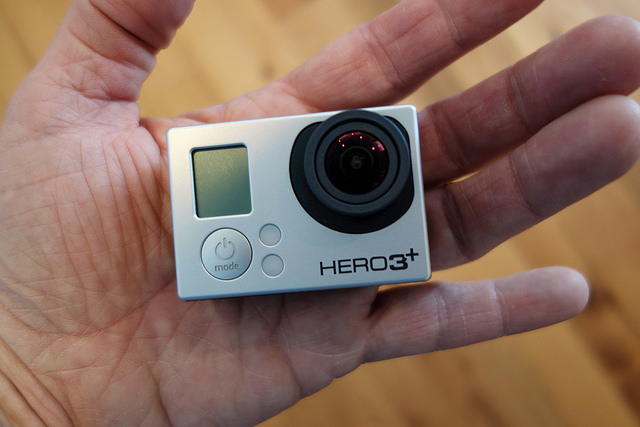 Despite what everyone thinks, the GoPro has been around a lot longer than just these past few years. The GoPro was born in America in 2001 when Nick Woodman, now a billionaire, began to create his first GoPro prototypes. Nick Woodman was in an unfortunate predicament having just lost over 4 million in a recent venture capital start up, which had failed monstrously. The GoPro was not an overnight success, it has taken a long ten years – and many technological advances – for it to evolve to dominate over 30% of the digital camcorder market, thus making it the most popular standalone camera maker in the world to this day.

The idea was born when Nick Woodman decided he wanted to make a camera that he could attach to his surfboard whilst he was enjoying his favourite outdoor hobby. However, after experimenting with the cameras he realised that both robust housing and strong strapping would be needed – leading him to embark on the creation of a new camera product portfolio that had never been seen before.

The company is America’s fastest-growing digital imaging company, with Foxconn purchasing the firm for 200 million to become part of their company which is already valued at 2.25 billion. Woodman, the CEO, went from sleeping out of his bus and surfing in the day with prototype cameras, to creating the world’s most famous and most loved camera. He created his company in 2001 with a GoPro camera that captured still images, yet by 2006 GoPros began to be sold with the ability to capture film, and they successfully went digital. In 2008 the GoPro was given its wide angled lens, which is part of the unique selling point of the product as no other cameras of this type in the market had this capability. In 2011 GoPro created Hero 2 and new high-definition cameras were introduced to the market. However, the milestone for the company was in 2012 when not only did the HD Hero 3 get introduced but the company also passed 500 million in revenue, thus encouraging Foxconn’s later decision to invest in GoPro.

GoPro has become an international sensation, with extreme sportsmen and travellers documenting their adventures and experiences all around the world. The results are not to be missed on social media. GoPro have a powerful position with three million followers on their Instagram account alongside 2.3 million YouTube subscribers on their channel. The ability that GoPro has to share and communicate with their audience is unlimited, thus promoting them as a leader within their market. GoPro has also been introduced to the Apple world; having created their own application that connects to individual cameras through wi-fi systems in order to see the media card when one doesn’t have an LCD screen to view them. GoPro’s product portfolio is extensive and extremely impressive, with mounts even being created for dogs most recently. Whether you are surfing and swimming in the ocean, canoeing or kayaking down a rapid, biking down a trail or skydiving out of a helicopter, there is always a specific mount made for you.

My personal favourite GoPro professional video would be ‘Pelican Learns to Fly’ which can be found on their official channel. The GoPro is attached to the beak of a pelican situated in Greystoke Mahale nature camp, at the base of Mahale Mountains in Tanzania. The pelican has just survived a storm but needs to be retrained by the conservationists to fly; the video sees the bird’s first flight around the island from the perspective of the beak looking down at the bird’s body – the viewing experience is liberatingly unique and couldn’t have been captured by any other camera known of.

However, the GoPro receives threatening competition from rival companies such as Polaroid, Apple, and Sony. Polaroid has introduced a new product called the ‘Cube’. The cube is a tiny, brightly coloured box-like camera that has only one button to operate by, thus making it simple and accessible to handle. It has both water and shock resistant qualities with an in built magnetic mount, coming to a very appealing price of just $100. The price is much more affordable than the GoPro, so for less professional photographers it would seem like an appealing alternative.

Despite GoPro becoming the highest-grossing digital image brand at Best Buy and knocking Sony out of the lead position for the first time in history, there is still competition facing them. Sony are rumoured to be introducing a new smaller, cheaper, and also mountable camera that targets an audience who do not need to have a camera adapted for extreme sports and activities such as the GoPro does. Lastly, the most ambiguous rumoured camera design is that of Apple. The recent patent that has been uncovered hints that they could take the pathway of building a new camera similar to that of the GoPro. However, the patent of a ‘digital camera system having remote control’ was filed for back in 2012, thus suggesting there are no new advances. The product may have the unique selling point of having multiple cameras to take digital film from several angles whilst being on a single mount. These rumours could escalate to something bigger – we will wait and see!