Half a month has passed since Halloween! I’m sure many people wore costumes of  ghosts and monsters such as jack-o’-lantern, mummies, vampires, witches, and zombies. But in Japan, there are many more kinds of ghosts and monsters compared to Europe because of the animism from ancient times. Among many, the most popular ghost in Japan is the woman with long black hair and white kimono I’m sure you all know from horror movies. Inspired by this, I’m going to introduce two traditional Japanese women ghosts and their stories along with the artworks painted by Hokusai Katsushika, one of the most famous artists in nineteenth centuries. 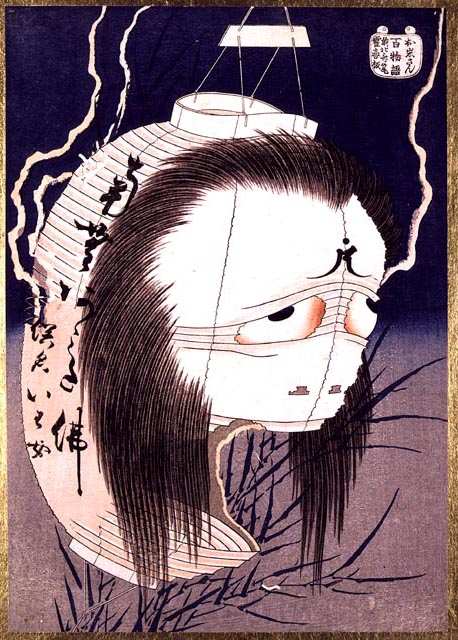 The ghost of Oiwa manifesting herself as a lantern obake. Print by Katsushika Hokusa, via commons.wikimedia.org.

This is the ghost of a woman whose name is Oiwa and her story is dreadful. Oiwa married a man called Iemon, but he killed her father, because he did not approve of her marriage. She fell pregnant and gave birth to a baby, but she was doing badly after childbirth and Iemon was unhappy with her. Later, a man called Kihei offered Iemon to marry his granddaughter. Iemon agreed, so both he and Kihei had to try and part Oiwa from him. Iemon asked a man called Takuetsu to rape her, then tried to divorce her by putting accusing her of unfaithfulness. On the other hand, Kihei gave her poison to become ugly, masked as the medicine to recover from childbirth to her. Oiwa took the poison in front of Takuetsu. When she combed her hair, all her hair fell out and her face lost its shape. Takuetsu feared her and confessed Iemon’s plot. She was angry at him and they brawled; but in the struggle, his sword pierced her and she died. At the same time Iemon killed a manservant because he stole a secret medicine kept in his house. Iemon tied their bodies to both sides of a sliding door and threw them away into the river.
After that, Iemon wedded with Kihei’s granddaughter, however, when Iemon looked at the granddaughter’s face, he thought that her face changed to Oiwa’s, and when he saw Kihei’s face, it turned to the manservant’s. He was frightened and killed both of them instantly.
Later, when Iemon went fishing, he found the familiar sliding door. Oiwa’s body was on it and she opened her mouth and wailed complaints. He turned it over, but of course there was the manservant’s body, and he cried also. Terrified, days later Iemon became lost, and discovered a house. The woman in the house invited him in and entertained him. However, her face changed to Oiwa’s face, and all the pumpkins and lanterns in her garden changed to her face as well.
The picture above depicts this scene. Her hair and the smoke are drawn by fine lines and become realistic. The point of this picture in particular is that Oiwa has big eyes and was described as humorous lantern ghost. Most of the artists tend to paint Oiwa as a scary ghost with a face and eyes that are always swollen, but it can be argued that Hokusai broke this practice and create his new way of painting. 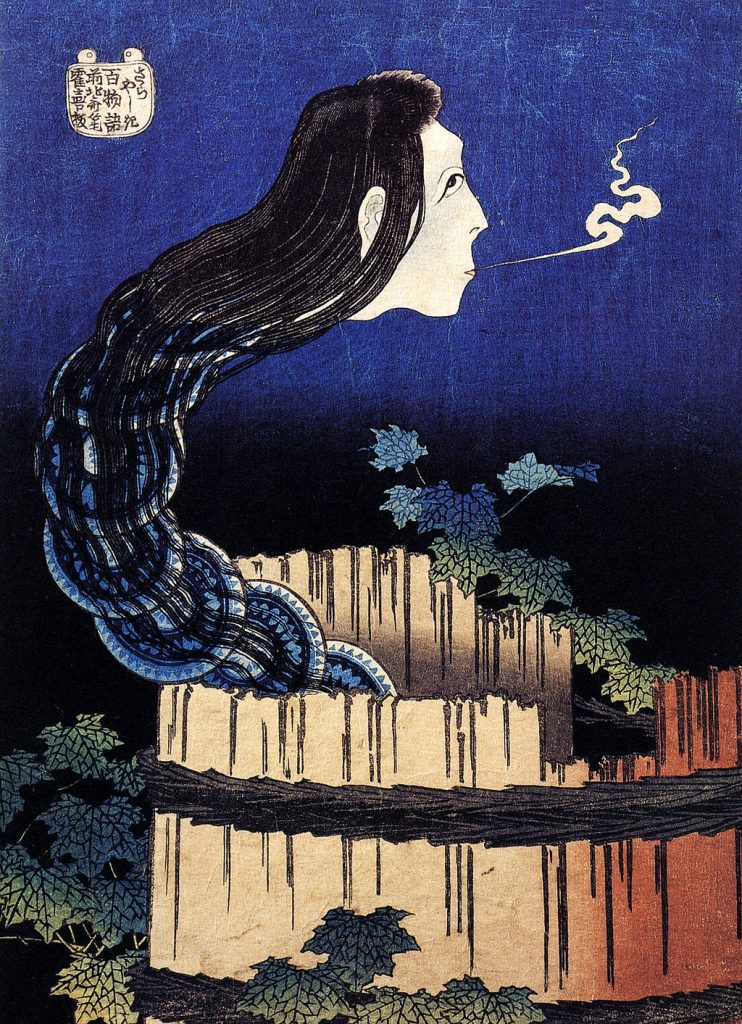 Okiku appears from a well, Hokusai Katsushika, via commons.wikimedia.org.

There was a maid called okiku and she was her lord’s favourite maid. Other maids were jealous of her and devised a plot. The lord had ten-matching plates in his house which he treasured. The conspiring maids hid one of the plates and tried to lay the blame on Okiku. When the lord discovered the missing plate, all maids said Okiku broke the plate and the lord scolded at her; but she denied it, and he asked her to leave. That night, she threw herself into the well and died. After that, late every night, they heard the woman’s miserable voice counting the plates from the well. Later, bad things happened many times in the house and the lord and maids died one after another.
This picture expresses the scene of Okiku’s ghost is coming out of the well with plates. The smoke coming out from her mouth may imply her sigh. Hokusai’s humor can also be shown from this picture, as Okiku was beautiful women in the story, but in his painting is depicted as an ugly women with drooping eyes. Furthermore, she is painted to give an impression of a snake, using plates to suggest her body.

These pictures are called ukiyoe and painted in Edo era (1603-1868). Though the common subjects of pictures in this era are landscapes and still life of people, many artists got interested in ghosts and monsters. These were painted as a part of one hundred set of ghost pictures, however only five of them still exist. High painting and printing technique is used in them, shown by the gradation of the color.

Hokusai Katsushika is famous for the picture of Mt. Fuji and landscapes, but he was also interested in ghosts. His paintings have sense of humor but are also dynamic and realistic, so that he is famous not only in Japan but many countries. He published over thirty thousand of pictures in his life and influenced impressionists all over Europe. Some paintings by Hokusai Katsushika are available at Oriental Museum in storage, but we can see them in their online database. If you make a prior appointment, you can see them directly as well. Why don’t you go to the oriental museum and see the collection of traditional Japanese artworks?