Exhibition Review: Mariah Garnett: ‘Other and Father’ at The MAC, Belfast 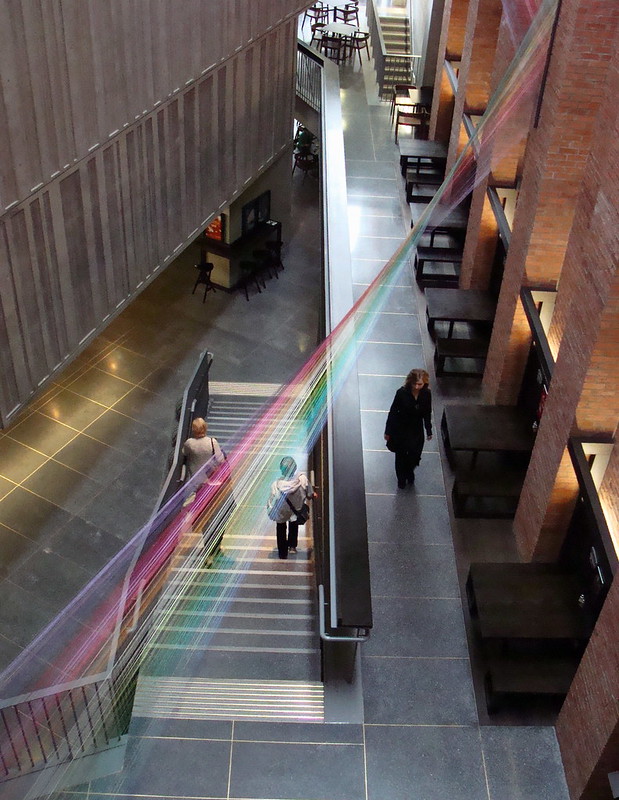 Upon entering The MAC’s Sunken Gallery one is momentarily disorientated by the double-aspect films which are being played on opposite walls of this concrete, cube-shaped room. Uncertain of which position is best to adopt, I resort to standing in the centre of the wall on the right-hand side, allowing me to glance back and forward at both films with relative ease.

The two films in question form Mariah Garnett’s latest work Other and Father, which appears in its own exhibition at Belfast’s Metropolitan Arts Centre or The MAC, as it is more widely known. The first film, an original BBC documentary from the 1970s, shows the artist’s father David, a young  Protestant man, alongside his then girlfriend Moira, who was raised a Roman Catholic, speaking of their experience has being a mixed-religion couple in Belfast at the height of the Troubles. The camera follows the pair around Belfast, seemingly giving us a faithful insight into an ordinary day in their lives which involves going dancing, walking through the rubble of a city demolished by habitual bombings, and watching a unionist band parade through the streets. The second film, which is synced to run in exact tandem with the first, is a contemporary reproduction of the first featuring Garnett portraying her father; Robyn Reihill, a transgender artist and actress from Belfast playing the part of Moira; and a number of other actors playing the parts of Moira’s mother, Mrs. Dunwoody, a protestant minister, and a catholic priest. Within the gallery there is one soundtrack which plays out the speech of the original documentary, while the actors of the 2016 remake lip-sync the interviewees’ words with incredible precision.

Garnett’s near point-for-point portrayal of her father, even down to his awkward dancing at a club, also highlights an uncomfortable cross-generational disjuncture that exists in Northern Ireland in the aftermath of the Troubles; by literally tracing the footsteps of her father we are reminded of how the youth of today have both inherited the opinions of their parents, and are at the same trying to make their own sense of their contemporary political and cultural environment. By recapitulating the 1970s documentary, Other and Father seems to suggest that the Belfast of the past is still very similar to the Belfast of the present; in particular, the unionist bands marching through the city at the end of each film are vivid reminders that assertions of cultural difference still play as prominent role in Northern Ireland today, as they did 40 years ago.

Outside the gallery is a screen playing a short film of the artist and her father watching the original BBC television programme in which her father appeared in the 1970s. During this viewing David tells Garnett that the film holds many factual discrepancies, and that the documentary’s producers had exaggerated the seriousness of the young couple’s relationship in order to make it appear like a tragic love story. David’s words make us aware of another potential layer to the duo of films in Garnett’s work; they draw attention to the filmmakers’, both those from the BBC and Garnett herself, retelling and refabrication of the truth which, in both cases, has been embellished to infuse the true story with further dynamics and drama.

The Sunken Gallery was the perfect choice for displaying this work; being large enough to allow space for the wall-width projections of the two films, and small enough to create a peculiar feeling of being trapped between past and present. The small-scale and close confinement of this room also creates an intimacy which adds a melancholic air to the reality of the estranged relationship of the American artist and Northern Irish her father, of which we are told in the exhibition summary. The close proximity of the two films running in parallel also seems have the effect of drawing us into a contemplation on the present situation of the religious divide in Belfast; as we look back into the 1970s and forward into the 2010s in one glance, and watch the prejudiced, sectarian opinions of the original documentary being spoken by modern actors, we realise both how far the country has come from the cultural and religious polarisation of the past, and how far it has got to go to achieve nationwide peace and understanding.

It is difficult to believe that this is only Garnett’s first institutional solo exhibition, as Other and Father is so deeply nuanced and thought-provoking that it would have us believe that it is the work of a long-established and highly experienced contemporary artist. Profound, moving, and utterly captivating, this work is a refreshing and fascinating portrayal of a complicated father-daughter relationship, and an outsider’s view of Northern Irish political history and its damaging effect on human relations.