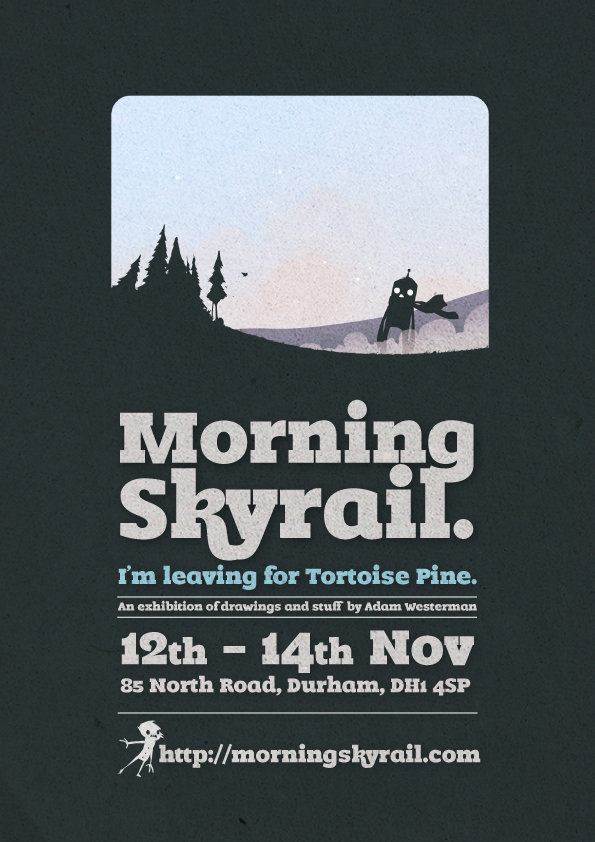 An empty, derelict and seemingly nondescript shop at the bottom of North Road. Something I rush past everyday in my dash to lectures. But, to my surprise, this winter the shop houses a “hidden gem” of Durham’s artistic and cultural scene. Escapism, immersing oneself in the far-flung fantasy worlds of the numerous mystic, atmospheric and serene natural landscapes, are captured by the local artist, who has called himself “Morning Skyrail”. Adam Westerman explains the logic behind his unusual title as being influenced by feelings of “magic and fantasy, removed from reality” experienced by a “sleepy six year-old who wakes at dawn to go on holiday”. “Skyrail” alludes to the sense of “out of this world” opportunities, possibilities and places that await you at the end of the line on a Skyrail station.

When I met Adam Westerman, he seemed softly spoken and slightly reserved, something he is aware of himself in his blog – “I’m kinda shy and not very good at talking”. But, this initial impression quickly unravelled itself. As he spoke fervently about his background, artistic ideas and modern day problems, I entered Adam’s world: it was clear that there was “A LOT” going on in Adam’s mind.

Westerman’s early experiences, as a young teenager constructing flash games and flip books, and his time at the University of Central Lancashire, studying animation and film, influenced and inspired his current exhibition. It features a series of stylised illustrations, drawn on scrap paper and biro, and an animated, cartoon-like film accompanied with ambient sounds from Brian Gocher. These imagined and fleeting images, of quaint thatched houses, white mountains, oppressive thunderstorms, purple midnight skies and serene rivers, reflect a running theme throughout his work: the desire to “explore, escape, get lost, a search for a reward, something, that might or not might not exist”, but is definitely worth pursuing.

The exhibition – “I’m leaving for Tortoise Pine” was made possible by the Durham based venture “Empty Shop”, set up in 2008 as a non profit organisation. It is dedicated to giving regional artists of all backgrounds and ages, a platform to display their work by providing a vacant building and turning it a functional art space, for exhibitions. Surprisingly, speaking to Empty Shops founders, they has been virtually undiscovered, or ignored, by the University, its students and any relevant art societies. This seems to be reflective of the divide between the students and Durham locals. Despite the venture’s trendy and contemporary routes (similar schemes exist on the art scene in Berlin) Durham students don’t seem to be interested.

The search for happier lands, and a longing for a release and freedom from a mundane, earthly reality, is reflected in Westerman’s clues of leaving birds’ feathers attached to the walls surrounding his work. The exhibition seems to be an interactive, reciprocal process, between the viewer and the artwork, something Westerman actively encourages. The viewer actively participates in his work, forming his or her own interpretation, but also “experiencing the landscape themselves, getting closer to the imagined reality”. He encourages the individuals to “step into another world and become part of the image”. The installation of a video in a dark room, featuring “keyholes” zooming into a series of different worlds and life-like sound effects, certainly seems to suggest that.

So, is the theme of escapism something personal to “Morning Skyrail”? “Bad things happen to most people, and exploring my own creativity as a form of escapism isn’t really a weakness; to me it’s a strength.” There certainly seems to be a real sense of peace, devoid of darkness and violence to Westerman’s work and he feels strongly about this in today’s modern day society. “The gaming market is saturated with violence and bloodshed; that just can’t be healthy or beneficial to anyone.”

Although his illustrations are possibly too understated to fully convey Westerman’s idealistic concepts, his video certainly draws you into the world of a “twenty-two-year-old monkey child from north-east England”. Underneath his positive and playful attitude, what is it Westerman thinks we are striving for? Spiritual or economic fulfilment? Possibly. Or a “warmth and cuteness and closeness” you can only experience from sadness? “Maybe, you need a little sadness to appreciate how beautiful life can be in its totality as well. Dig?”