I know it’s not a competition or anything, but considering I just wrote an article about my picks from the Louvre I think its okay for me to say that… the Musee d’Orsay trumps it by far! Think Post-Impressionist, Expressionists, Impressionists – the works. Its all here, lying in the walls behind that beautiful picturesque clock. Here are some of my favourite pieces. 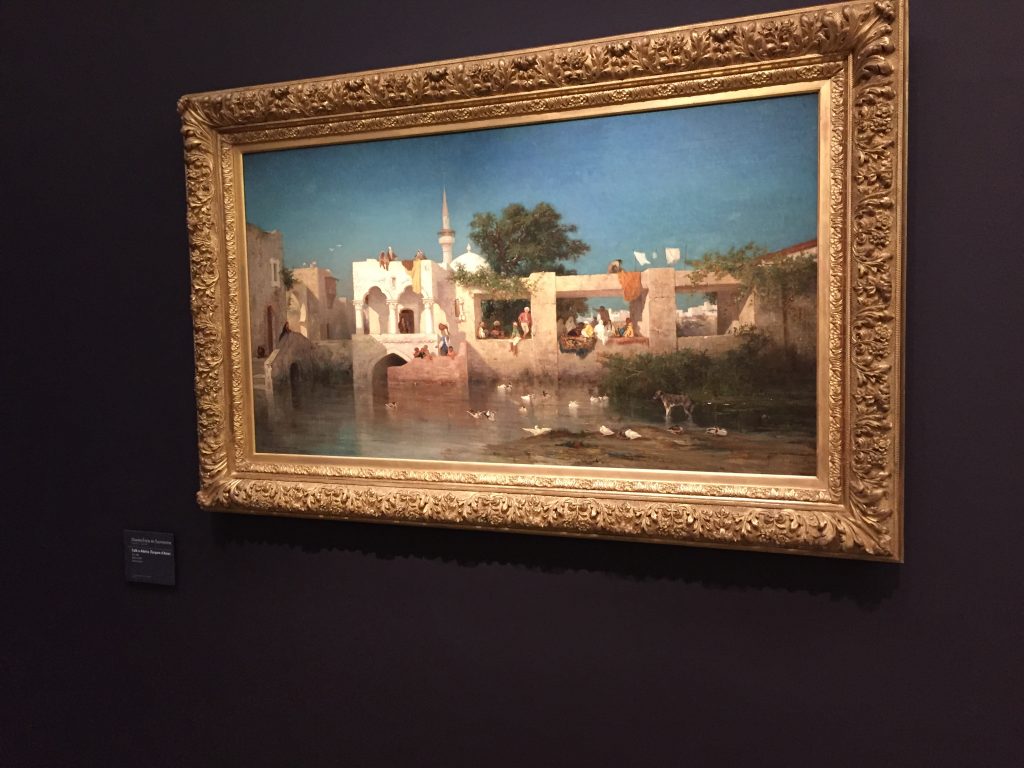 One of the first rooms we walked into concerned itself with Orientalist art which was indeed a pleasant surprise. The Orient was effectively Northern Africa and Palestine, although it did not correspond to a precise geographical area even though great colonisation was occurring. Images of the ‘other’ culture were indeed dream like and fantastical as a foreign culture was depicted in many artist’s works. In this piece we see a beautiful Turkish setting with qualities of the Orient such as the bright blue sky, wild carefully chosen animals outside and the specifically white buildings that were designed in such a way to promote the introduction of natural heat and sunlight into their structures. The piece provided an insight for the European world into that of another. 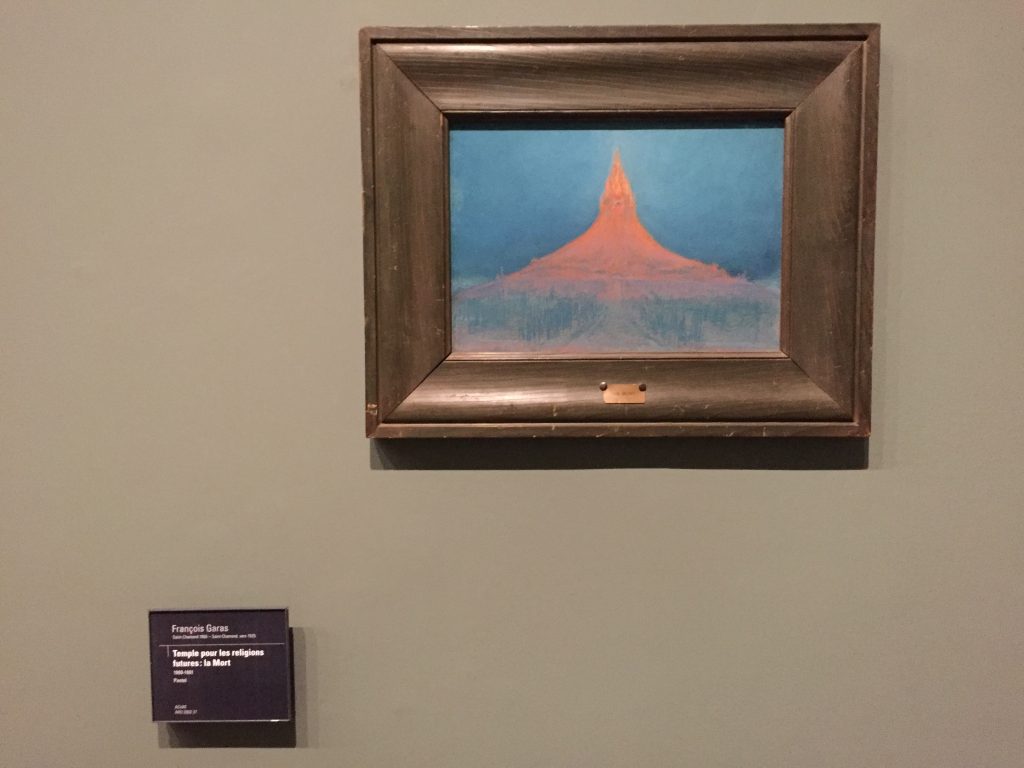 Francois Garas, a name not familiar to me prior, was an architect whose lively works translated ideas, sensual sensations and musical rhythms into architectural structures. The museum had many of his paintings but my eye was drawn to this piece particularly. His utopian compositions were dedicated to musicians such as Beethoven, Wagner, etc. The beautiful control of colours in a bright yet almost pastel format was interesting to me as it carefully translated the rise of the sun over the scene and thus the waking call rings in the viewer’s ears. 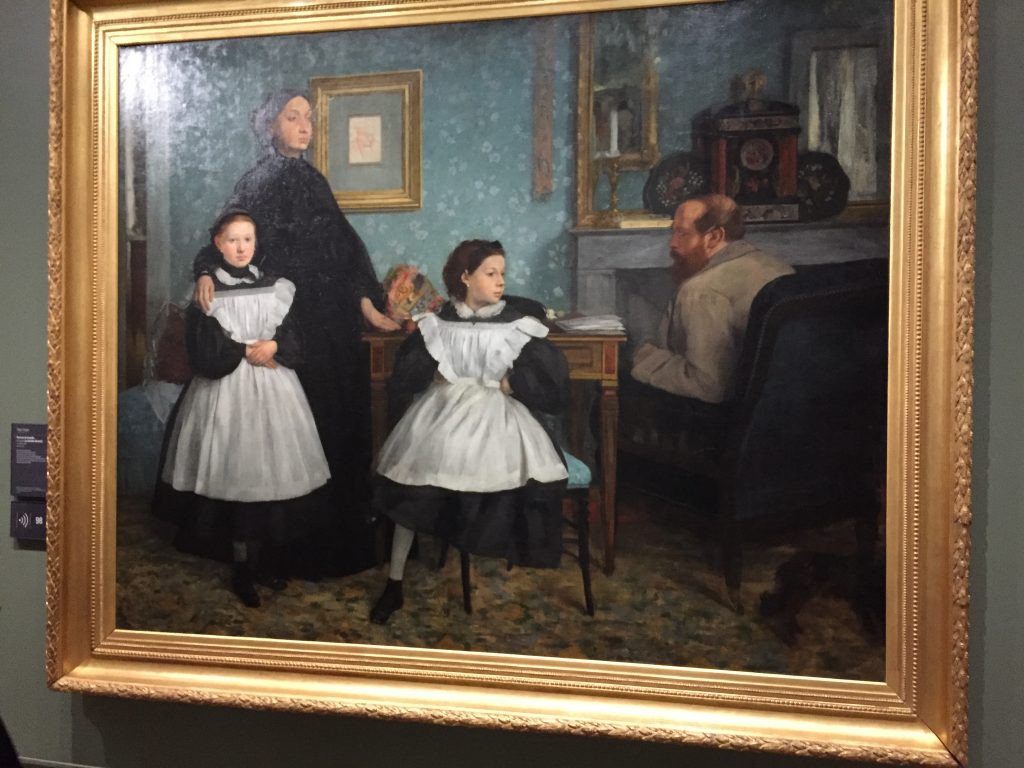 Here Degas paints his father’s sister, Laure, with her husband, the baron Bellelli, and their two daughters. The dynamics and positioning between the family members is an interesting insight into the contextual climate of the time. The mother is stood with authority, contrasting to the aloofness of the father, detached on the right hand side and sat down facing away from the family. The room is very imposing and structurally set, as the figures fit into their societal roles. The younger daughter’s crossed legs contrast to the stature of the elder daughter, thus signifying the transition from child to a teenager whom is about to enter into a life dictated by adult rules and codes. 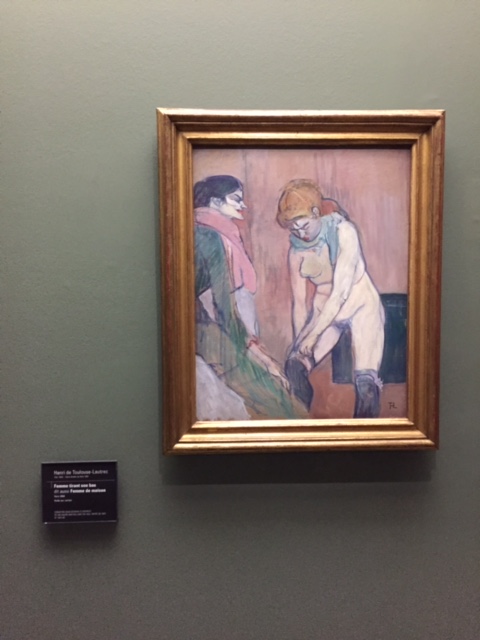 Henri de Toulouse-Lautrec, the infamous poster designer, was infatuated by the world of entertainment, capital pleasure and art in Paris. He turned to scenes of leisure for his artistic inspiration, with a focus on nightlife. Many of his pieces concerned singers, dancers, clowns, actors, prostitutes and demimondaines. In this piece he paints a prostitute adjusting her stockings. Thus he enters into the intimacy of the brothels, where he takes the girls back to the workshop where he can admire and view them intensely. He was very interested in the conventions of the nude and wanted to be as close as he could to nature. 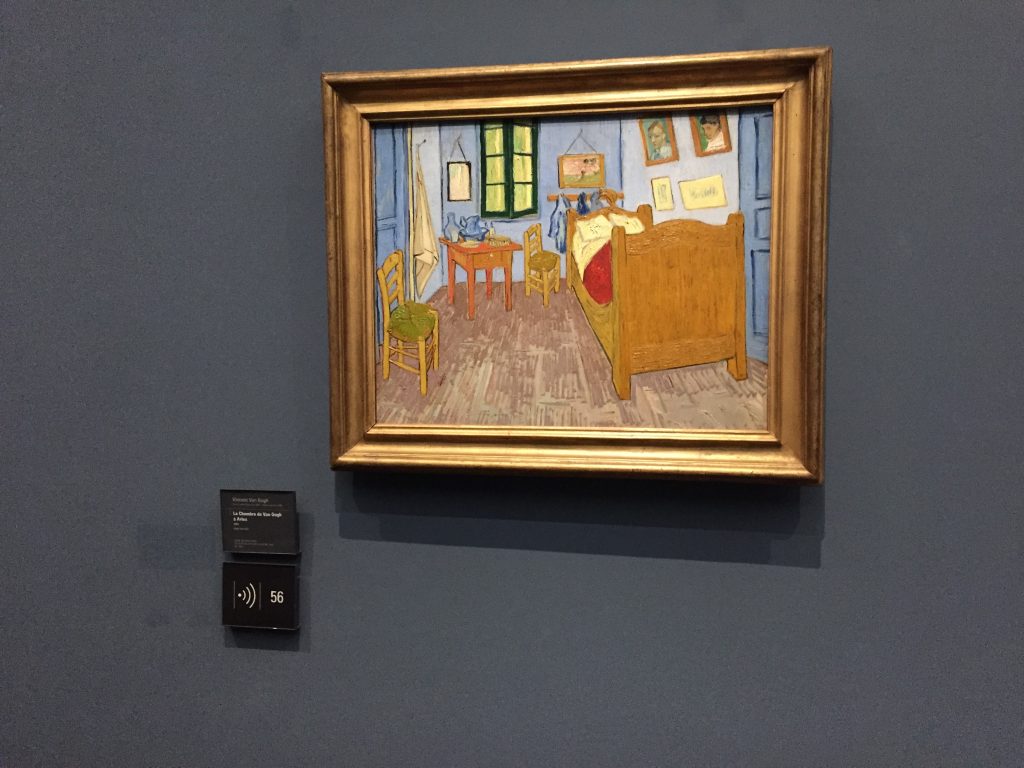 Arguably the piece that I was most pleased and excited to see; Van Gogh’s bedroom at Arles. Van Gogh produced three almost identical paintings that focused on his bedroom. In a letter to his brother he explained that he wanted to express the tranquility and simplicity of his bedroom through symbolism of colours. As we can see the walls are pale and lilac, the floor faded red, juxtaposed with yellow chair legs and the frame of the bed. The colours refer to Japan for instance, as Van Gogh has a great oriental and japonais interest, concerned primarily with print making. 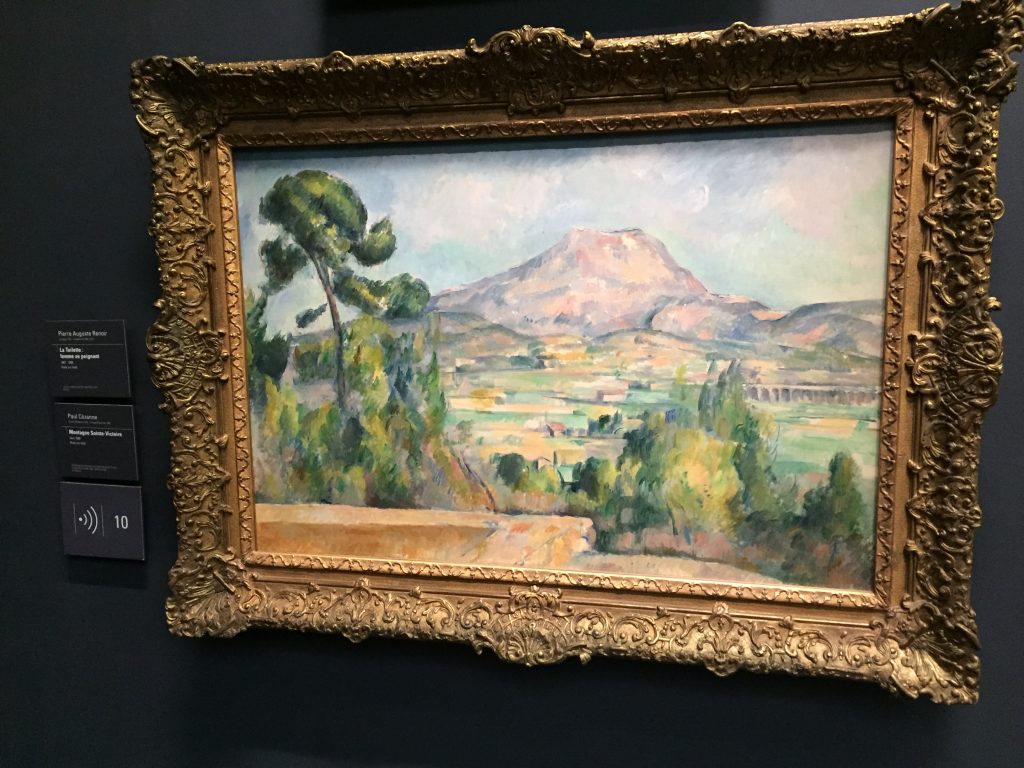 Cezanne was besotted with the view of Mont Sainte-Victoire that he found in the South of France overlooking Aix-en-Provence. He created a series of oil paintings of the mountain and soon it became an image strongly associated with his artistic ouevre. Cezanne uses beautiful flat brushstrokes of vivid colour that creates a scene full with lights and shades, bringing to life the dynamism of the natural sunlight upon the scene. 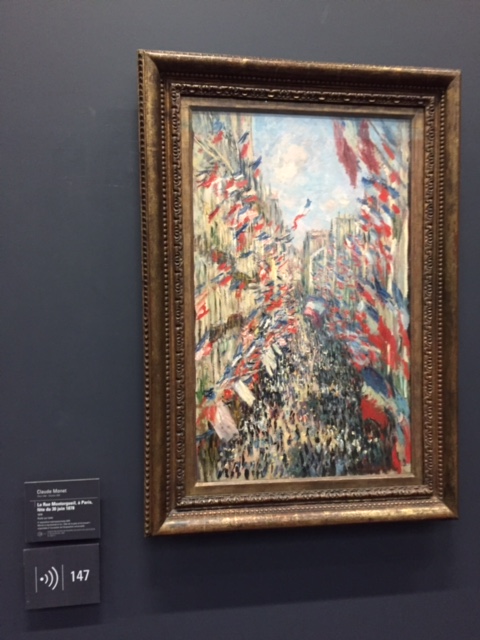 ‘The Rue Montorgueil’ is often thought to depict a 14th of July celebration in France. However, it was painted on the 30th of June 1878 for a festival that the government informed the people was for the celebration of peace and work. This celebrations symbolise the French recovery after the battle and furthermore their defeat in 1870. The colours of the red, blue and white flags are extremely bold and bright catching the viewer’s eyes within seconds and symbolising the very emblem of France. The numerous small and expressive brushstrokes connote the swishing of the flags and a sense of dynamism interrupts the scene that brings to life the excitement, movement and exultation that the festival would’ve demonstrated. 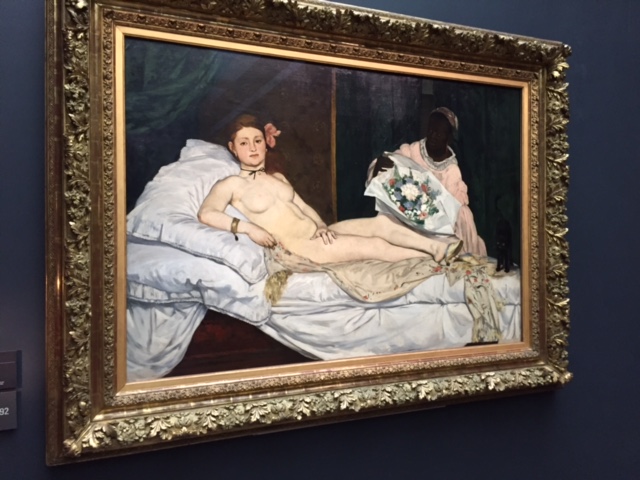 Manet’s ‘Olympia’ reveals much about her socio-historical and cultural context, as she perfectly exemplifies the prostitute that was such an inherent figure within society and a leading artistic symbol which many artists focused upon, as they sexualised the female nude. ‘Olympia’ reveals the secret activities of the bourgeoisie who invested into prostitution and thus she unveils the corruption and lack of morals within the upper-middle class who dictated a false set of values and associated moral code.