Upon entering the Louvre one is immediately daunted with the prospects of choosing what exhibit or which area to explore first. Well, for those who want a quick and more precise trip I recommend checking out the French and Italian painting halls and I am going to point out some spectacular pieces that especially caught my eye. Well of course caught my eye once I was done standing on tiptoes gawking at the Mona Lisa, as many a tourist hindered my view, but hey, she can see me from all angles anyhow! 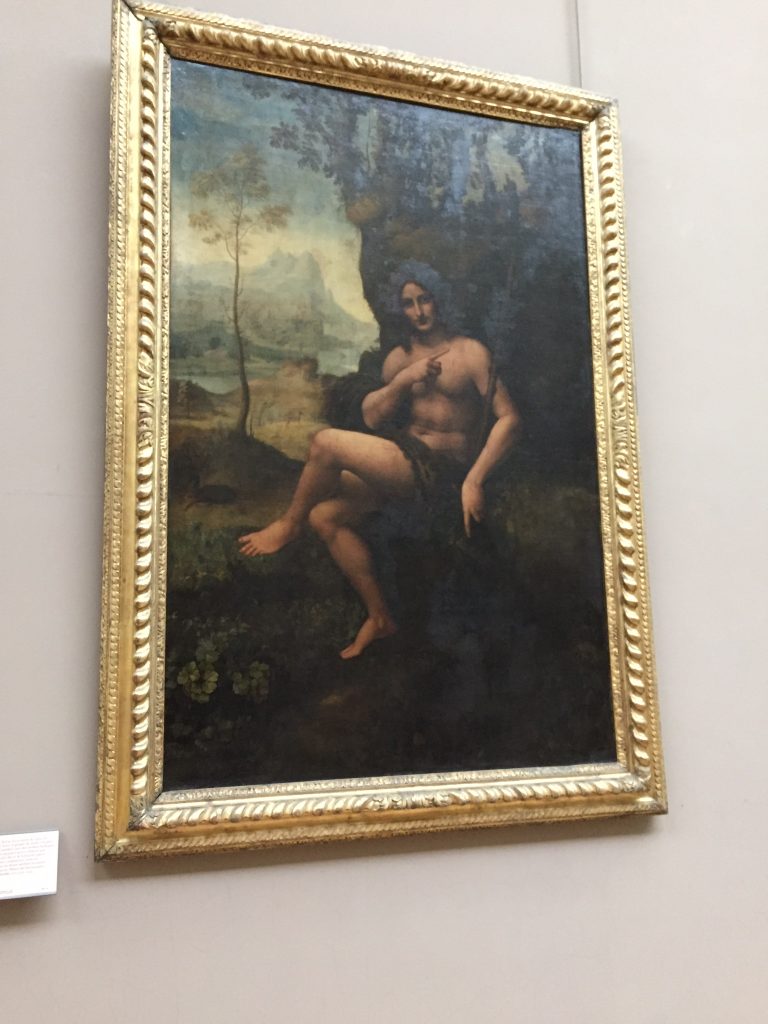 One of the boasted pieces on the Italian floor, the beautiful Bacchus made in Leonardo da Vinci’s workshop stares at the viewer from the medium of an oil on walnut panel that has been transferred onto canvas. This piece is not only visually gripping, but the contextual story behind the piece too is interesting, as it is not entirely known whom the creator is. Although it is assumed to have been one of the Lombard painters, such as Cesare da Sesto, Francesco Melzi, Cesare Bernazzano or Marco d’Oggiono, all of which were admirers of Leonardo.

The name Bacchus is a classically used instead of Dionysus, the male’s real name, who is a Greek god of the grape harvest, winemaking and wine, of ritual madness, theatre, fertility and religious ecstasy in Greek mythological writings. Thus it seems fitting that one regards this Renaissance figure that emulates a brightness and beauty dominating the centre of the picture space. We find him gracefully poised hanging amongst the natural surroundings, enshrined in grasslands and branches that frame the figure in an oasis of flora, our gaze is held as the male contests the viewers gaze by looking directly at him.

The body language of said figure is extremely enticing as the index finger of his left hand that grasps the thyrsus points towards the ground, however, the right hand index finger points to his upper left hand side, whilst the left leg is crossed over the right which points towards the right hand side of the man. Thus although the figure sits directly infront of the viewer there is a sense of dynamism and pictorial space that extends beyond that of the physical frame as many lines are created and a sense of direction and extension exists.

Vittore Carpaccio, ‘The Sermon of St. Stephen at Jerusalem’ (1514) 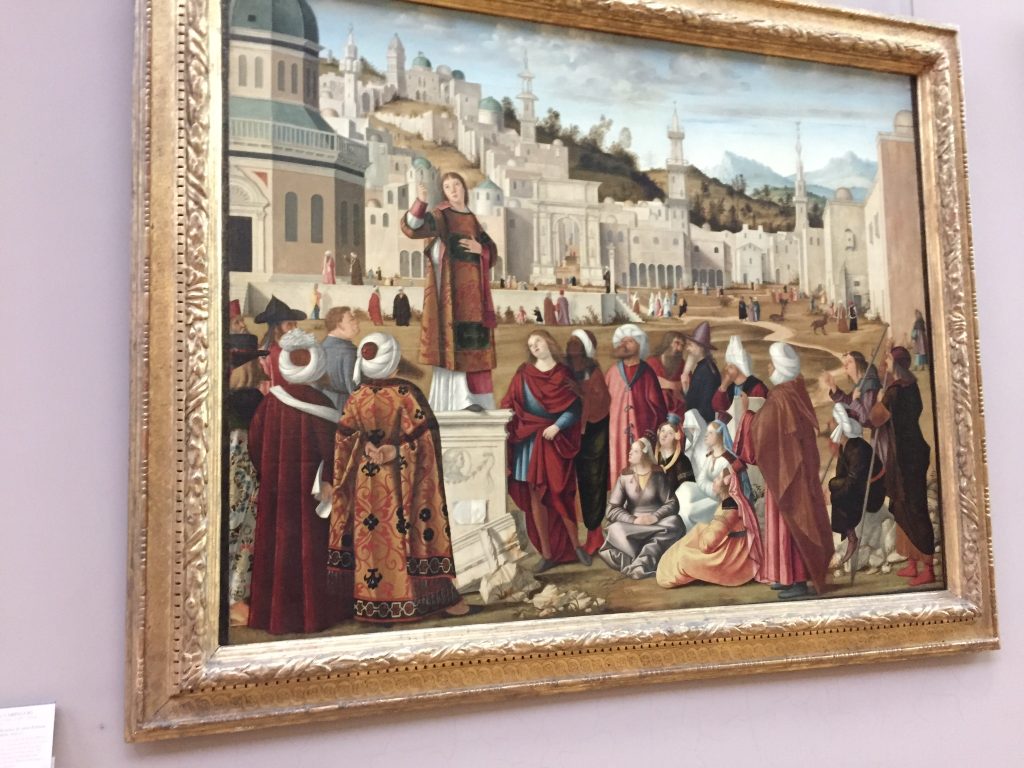 The Sermon of St. Stpehen at Jerusalem – Author’s Own Image

Vittore Carpaccio was a Venetian painter of the Venetian school who’s artistic flair was heavily influenced by Early Netherlandish art and the style of Antonello da Messina, an Italian Renaissance painter. His piece ‘The Sermon of St. Stephen at Jerusalem’ illustrates a religious scene inside the walls of Solomon’s Temple in Jerusalem.

One’s eye immediately goes to the elevated figure standing on the pedestal. The pedestal appears to be partially in ruins, crumbling towards the ground, this is symbolic of the victory over paganism. This figure is that of St. Stephen, his body language and the body language of the Eastern men and women and Westerners that sit and stand around him, infer his religious nature as their upwards gazes and his index finger pointing towards the skies suggests the relationship between the people and a higher being or the pondering of God and the Heavens above them. 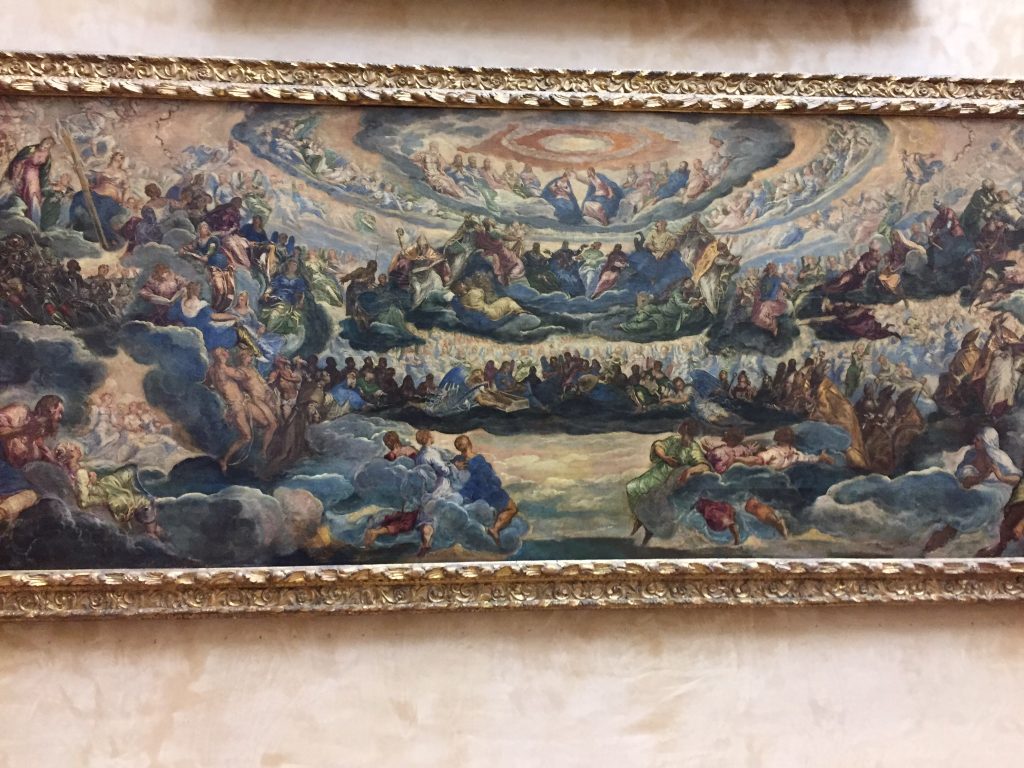 The Crowning of the Virgin – Author’s Own Image

This painting appeared to me to be very much unlike the other pieces hanging in the glorious hallway of Italian Renaissance paintings that I had walked through. The swirling nature of the clouds that the figures sit on that encircles all different levels of the pictorial space is visually gripping and almost hypnotic.

According to the Golden Legend after Mary’s death she reunited with Christ for a Coronation in the highest Heavens. Here, the Church fathers, saints, popes, bishops and martyrs attend to witness the event and sit in the half-circular forms in a hierarchical order.

There are many religious icons within the piece and thus much symbolic artistic language and significance as metaphorical meanings are enlaced within the visual masterpiece. The nimbus placed over Mary’s head signifies the intrinsic value and elevation of her being and status, whilst the dove hovering above her, almost hidden in the light of the halo, represents the presence of the Holy Spirit.

There is a sensory element to the piece as the middle layer of attendees hold various musical instruments and are open mouthed to in song, and thus the all encapsulating auditorium of clouds is filled with melodies and sounds of heavenly praise. 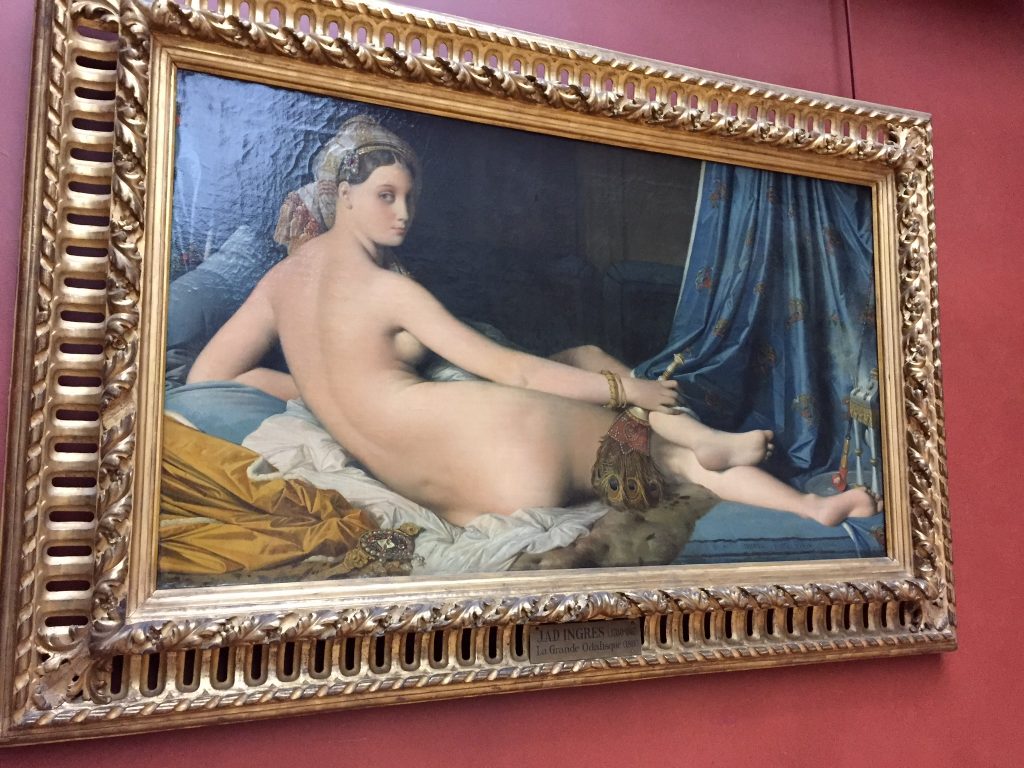 Ingres was a French Neoclassical painter renowned for his Academic style and orthodoxy. Hs piece ‘La Grande Odalisque’ makes the viewer feel somewhat uneasy, as we catch this nude female figure from behind as she peers over suspectingly at us. He takes the image of the mythological nude that dates back to the Renaissance period and instead transposes it into an imaginary Oriental scene.

The translation of the painting is ‘Harem Woman’ and thus we are plunged into the land of the Orient. Therefore Ingres creates a scene that develops the idea of a distant land, combining the nude form that featured heavily in Western art but with the influences of the nude Renaissance figure drawn from mythological interpretations. However, the figuration of the body is highly stylised and crafted in an anatomical manner of an unrealistic nature. Therefore Ingres successfully presents the viewer with an interesting and fascinating woman, new to the contextual audience that would have received it in the Napoleonic period, that encapsulates the viewer’s thoughts and line of sight.