Roaming the streets of New York from the 40s to her suicide in 1971, Diane Arbus investigated the lives of those on the edges of society. Again come to the fore, the morals of her practice require re-evaluation. Famous for not depicting the formulaic ideal of American society, her ethos of depicting all led to a representational diversity that still defies comparison today in its tenacity and style. Yet do the photos, or indeed Arbus’ approach, speak of an exploitation that gives adversity to their status? Her mission, “not aiming to reform life, but to know it”, could mean that her understanding is projected onto the sitter, demeaning the fragility of their situation. However, it is this intimacy, as in Burlesque Comedienne in her Dressing Room, Atlantic City, N.J. 1963 (below), that gives the photographs intrigue, and denies irrelevance.

Aesthetically stark, her sitters do not seem to question the matter of their being object, but it is the relationship and trust between photographer and person that becomes evident to the visitor. A tour of the 69-photograph, 3-room exhibition at the Nottingham Contemporary was not easy viewing, but was nevertheless captivating. Such is their power of testament for the sitter that the photographs seem to estrange the viewer with their intimacy; Arbus’ invitation to re-accommodate those depicted within society is still a challenge to preconceived notions of normalcy. 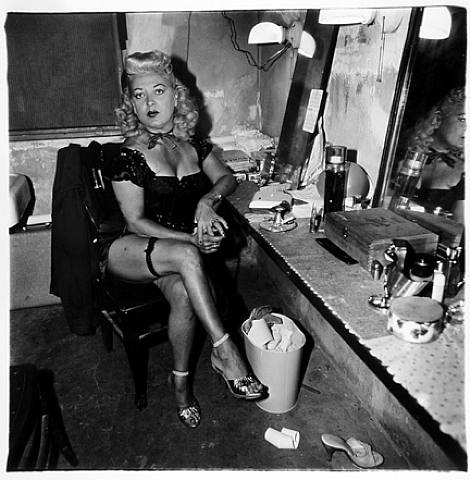 Yet it is not without a sense that Arbus’ fascination could be deemed to be intrusive, unkind, and exploitative that the viewer continues to objectify those depicted. But the question remains, why are these images so captivating, so revelatory, that her “freaks” seem normal, and yet not so? Are these photos, no longer documents of lives past, too established within artistic canons that questioning their motives seems irrelevant? As it is we approach them with their artistic status seemingly irrefutable, either on display within the exhibition, spaciously printed in an art book, or embedded upon a pristine artistic website. For such questions, technique needs consideration. Arbus would befriend her subjects, gaining their confidence by inhabiting their lives as well as their domesticity. She would witness their intimate interiority with an almost fatalistic fascination, and capture it as if evidentially. Therefore the sitters’ ambiguity to the world is not perpetuated, but in the intimacy of her portraits there is an opportunity to appreciate the starkness of their beauty. 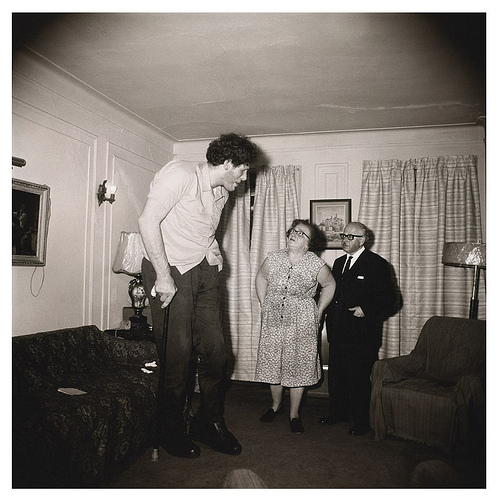 Within the Contemporary exhibition there was a smaller room, a hidden antechamber in which the rest of the exhibition was held. Around a dozen photographs hung around me, glaring down and challenging me to bear witness to their lives. Institutionalised, these individuals posed to me the greatest challenge of the exhibition. Challenging as the photos are, to refuse to acknowledge them would be to deny the lives of these individuals. On second viewing, in place of an initially perceived vulgarity, I perceived a genuine joy that overrides any ideas of exploitation.

The need for a new street photography remains, and it is perhaps in the paranoiac state of contemporary society that a re-questioning of Arbus’ work seems both necessary and appropriate. What extent should the photographer use the subject, and what obligations do they carry in relation to the person on the street, even more so one in their own home? Indeed, society has changed with its attitude to the prevalence and presence of the lens within the public domain, perceived more as a means of surveillance than artistic depiction. Here is the challenge to the modern photographer, in that the beauty of Arbus’ shots is in the discovery of society’s diversity, the individuality depicted not in a way to document their difference, but the complexity of life. I am not going to conclude by saying that the need for online personas has caused a standardisation of the individual’s portrayal, but perhaps what is needed is once again an invested and considered approach to the sitter, from both the photographer and the viewer, where time is taken to discover the intricacies of life. Perhaps for some, however, such portraits simply speak too much.

Previously exhibited in the Nottingham Contemporary July-October 2010, 73 photographs of the collection owned by ARTIST ROOMS will be on exhibition in the Aberdeen Art Gallery, from the 5th February to the 9th April 2011, and an expanded selection will be put on display in the Tate Modern, London, 1st March 2011 to the 1st March 2012.