Contemporary Art – but is it really art? 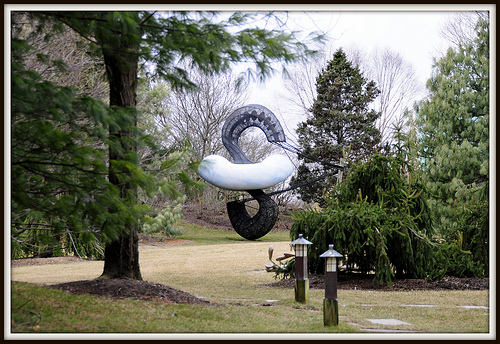 Standard reaction to contemporary art: “WHY?!”

Art. A contentious word to say the least. Say it to the average person and they’re likely to think of paintings by long dead Italian guys; Van Gogh, Matisse, that sort of thing. And whilst it certainly doesn’t take me to tell you that there’s much more to art than this, at what point does something stop being art and start being merely pretentious? Is it possible that that we can realistically call “a pile of bricks” as my mother described it when I uttered that most heinous term – contemporary art – art? Could it be that these “bricks” or other similar ’90s-style “artwork” become a legitimate contribution towards our cultural and aesthetic heritage?

The gut reaction is “probably not”. For us to accept something as art, it must have an element of creativity to it which the vast majority of modern art could be said to appear to lack. Indeed, it would be hard to argue that there is a creative spark or process at work when putting bricks into a pile. With art, there surely must be some kind of talent at work which manifests itself in the ultimate product of the artwork, whatever it is. We’ve all looked at works considered by high-minded critics to be the latest cutting-edge thing and thought “I could have done that” – the classic example of course being Tracey Emin’s “My Bed” which literally constituted of her unmade bed for us to peruse. Whilst Emin defended her work (as any artist would), it is this “anyman” aspect of art that has lead the public to largely be scornful of contemporary approaches to art, even if some of the more eclectic measures of expression have validation.

When it comes to “modern art”, I believe that we cannot respect something that we feel capable of creating ourselves; especially when that creation goes on to win various prizes and accolades; often vast amounts of money for seemingly very little work. It is as if we feel that we too deserve credit for the piece because of the virtue of our own potential to recreate it ourselves. By contrast (though I speak for myself), I feel confident in suggesting that the vast majority of people would have difficulty trying to recreate Michelangelo’s “David” – the mastery of the medium is what gives it the credit from people it deserves. Indeed, few would dispute that Michaelangelo deserved his wages….

However, with much contemporary art, there is a problem in that there is not necessarily a medium to master in the first place. Take Vong Phaophanit’s “Neon Rice Field” for example – I imagine it would be quite hard for one to become especially talented in the artistic application of rice as opposed to paint or sculpture. Yet despite this, Phaophanit was shortlisted for the 1993 Turner Prize and was widely praised by both the press and public. Whilst naturally there was some backlash against this rice-art exhibit, the public were arguably much more accepting of Phaophanit’s work than Emin’s. Why is this?

As Leo Tolstoy suggested, art involves the communication of ideas and concepts in addition to creativity. It is not enough to be talented, that talent must be combined with a message, a unique way of explaining and interacting with the world. Whilst Emin’s work for example obviously has one, whatever message this piece has may not be strong enough for the average public member to accept other than its regular mundane qualities. It is hard to see a pile of bricks as an artistic metaphor for aggression for example; their daily use could be said to overpower this metaphor unless used carefully although how this could be ensured is naturally difficult. In contrast, Phaophanit’s piece for example is striking for its unusuality – not only does the artist use an unconventional medium in an unconventional way, it has something that perhaps Emin and/or other contemporary artists art lacks – beauty. And it is this beauty which enables it to perhaps be a better metaphor for a concept or message than other, mundane objects masquerading as art.

This issue of beauty is the key to the entire debate. An unmade bed for example is nothing spectacular; like the aforesaid-mentioned “pile of bricks” it is something that we can see in our everyday lives. Whilst the context of placing the work in a gallery or exhibition changes the meaning of the piece, if it does not possess beauty in some manner, then it would perhaps not be a stretch to say that this is not art. Indeed, it is this what is arguably missing in a lot of contemporary art. Van Gogh’s paintings are undeniably beautiful because, to use everybody’s favourite philosopher – Immanuel Kant – they combine the imagination and understanding together to create something new. When we look at the work, we see it and admire it, and as we continue to look, we see more and more things. If we turn away and look again, we see new things that we missed the first time and in good art (according to Kant), this process should continue ad infinitum.

So, to ask the question again – can a pile of bricks be considered art? The answer surely must be “potentially, yes”. If the contemporary artist can create a piece which is both unusual and striking, a piece which is beautiful and has a message ideally manifested in an appropriate form, can allow the spectator to think and reflect upon their own lives and experiences, to see the world in a different light then surely these are all things that art does. The medium this message is contained in, whether this be paint, rice or bricks should not be of too much importance in theory though as discussed, the medium is the way of understanding (or not) the artistic message. After all, even a pile of bricks have a story although would bricks from your garden wall be considered on equal artistic merit as bricks from the Berlin Wall? Probably not – but that’s a matter for another time.

Like it or not, contemporary art is here to say. Taking the Turner Prize again for example, an increasing amount of shortlisters are moving away from “traditional” media such as painting and sculpture to more exotic installations, “found” art, film and photography. And like it or not, Tracey Emin’s work is something that everybody remembers – hers much more than any of her paint-using peers’. Surely, even the very question of “well, is it art?” at her work “The Bed” paradoxically creates it anew continually as art or “not-art” depending on the occasion in a delicious subversion of Kant’s own theory. So yes, whilst the vast majority of contemporary art may be pretentious drivel, time will tell what installations serve to become tomorrow’s classics. After all, even Van Gogh wasn’t recognised until after his death. Classic artwork and popular artwork are two very different things. I think that the naysayers should remember that.