Can Photography save us from the Modern Era?

Our generation seems to be doing things with technology that I never thought could happen. Over the past few years, Smartphones have blurred our academic, social and professional lives into one, neat, touch screen package that also plays your favourite albums. Over the past several months, Facebook and Twitter have transformed from cool toy to revolutionary weapon. And today, Photoshop will provide ample evidence for the non-philosophically inclined to embrace the 20th century. No, that is not a typo, and yes, I am fully aware that we left that century behind when most of us were still in primary school.

The suggestion, or rather, the connection that I want to make is between the still popular positivist view of the world and what photography theorists call the index, or visual similarity to the actual object the photograph is depicting.

Although the belief that what-you-see-is-what-you-get may work generally well as a basic, pragmatic approach to life, now, more than ever, we face daily issues where a bit of philosophy can go a long way. Namely: (and I will make no bones about it) I come from the land of giant trucks, cowboy hats and what I like to call the “duelling media banjos”. That’s right, good ol’ America. And while I love my country, these duelling media banjos prove that money doesn’t necessarily buy you brains. So, what is wrong with us? Why is it that we, as a nation can grow up side by side and yet be unable to agree upon, well, anything?

While it may be easy to call one wrong and one right, we are all wrong. We all adhere to this notion that there is a “truth” to be heard and this “truth” comes from our particular brand of news. For Republicans, Fox News reaches furthest out to the right with Glenn Beck, the part-religious, part-good vs. evil political commentator known by his opposition as the “silver gopher”. He is famous for using a chalkboard to string together events into a sort of conservative political narrative. On the far left, Comedy Central (yes, an actual comedy channel) is home to the political satire antics of Jon Stewart and Stephen Colbert, who aim to deliver a version of the news that pokes fun at the obvious media bipartisanship and its effects on Americans. This aim took on a new meaning when, in 2009, an opinion poll by Time Magazine concluded that Jon Stewart had become the most trusted newsman in America. 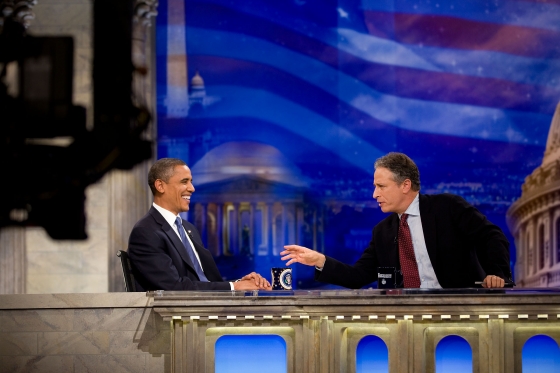 How does this happen? How can it be that with so many college-educated people out there, that there can be such a polar view of the truth? Can it be stopped? Can we be cured? The answer, surprisingly, was actually answered well before any of us were born: hermeneutics.

Don’t be alarmed! It may seem odd and abstract, but hermeneutics, becoming a popular academic movement in the early 20th century, is just a fancy word for a basic concept. An old professor once described it best when he said that hermeneutics is basically an “in here/out there problem”. More specifically, how is it that we get information from the world “out there” and get it “in here” to our minds? By following this line of thought, it becomes apparent that there is no direct connection: everything we learn is interpreted, not imported. There is definitely information in here, and there is definitely information out there, but there is absolutely no evidence that concludes the information is the same.

More importantly for this article, where does that place “truth”? Where does it exist? Is truth in here, out there, or nowhere at all? Although from a practical perspective, it seems obvious to say that truth must exist somewhere, this question of where we get it or how we transport it begins to get fuzzy.

The way that people think, by and large, lacks this realization. There is good reason for that, too. On a practical level, there is no reason to consider hermeneutics when deciding whether or not to touch a burner on a stove. The stove is either hot or not hot. There is no need to recognize that “hot” is only my interpretation of what that stove appears to be.

Throughout much of human history, survival meant making smart decisions based upon the information provided. The caveman did not need to think “the coals of the fire make me interpret them as hot”, a mere “this is hot” would suffice. In a world where a persuasive leader says that “you are with us, or you are with the terrorists”, however, critical thinking can be said to count for something. The time has come, it seems, for the average human being to recognize that next philosophical step: a step into the 20th century.

So, let’s apply this to politics within the media. Here, the game changes. We see things presented as “truth” and, without considering whether or not “truth” exists, we accept it as either true or reject is as false. Some people will accept this particular narrative as truth and others will adhere to a different truth narrative. But to know that something may be neither true nor false changes everything. By recognizing that we, as humans, create our own truth rather than ingest it like a slice of birthday cake, we can back away from partisan rhetoric and separate facts from values packaged as “truth”. Empowered with this knowledge, political media polarity would likely make less sense to adhere to. Sense restored!

So how, then, do we teach it? How can hermeneutics be introduced to a world that has largely ignored the practice for the better part of a century? Here, my friends, is where this article finally becomes a work for the photographically concerned. Although photography was invented well after positivism was, the two have shared a sort of superficial bond. While positivists were in search of a way to explain how we can know things about the world without having un-mediated access to it, photography emerged towards the end of positivism’s academic popularity.

With the photograph’s uncanny ability to represent the appearance of reality more accurately than any other method of representation, it stood as a support beam for our confidence in truth: both in photography and in life. On the contrary, of course, the photograph has been more rhetoric than truth from day one. Through selection, framing, cropping, captioning formal design and a plethora of other factors, photographic representations have been shaped, arranged and injected with artificial meaning whilst the general consumer of the imagery remained oblivious to this rhetoric.

Photoshop, however, is changing all of this. The index is under attack like never before. We begin to see images that shock us in their ability to both appear indexically accurate, but at the same time, utterly unbelievable. We have been cast into an era where sharks jump out of an ocean of sand, Obama has a Hitler-shaped moustache and Sarah Palin poses in a stars-and-stripes bikini with a hunting rifle. Some images serve as believable, some unbelievable, but regardless, their mere existence upsets the once seemingly concrete relationship between photography and truth. 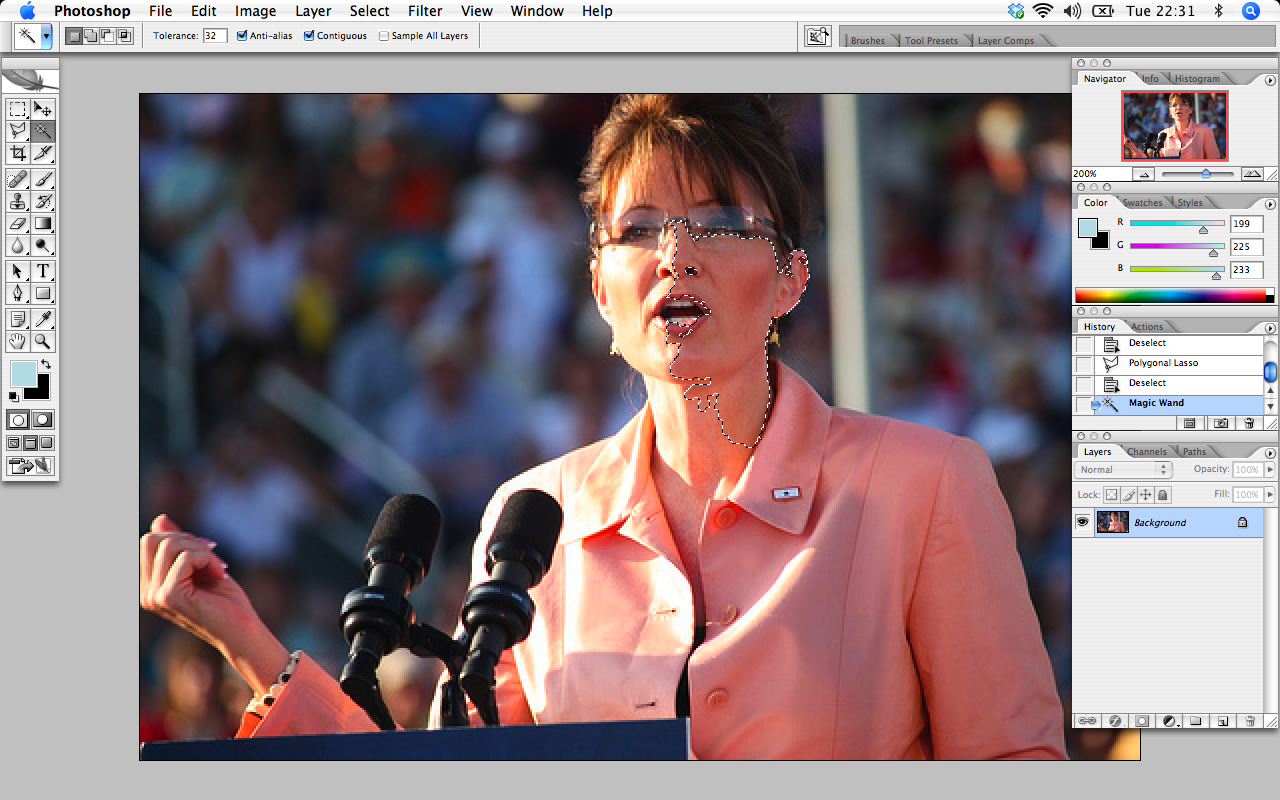 Could Photoshop alter our perception of “truth”?

My point is this: although Photoshop has changed nothing concerning the nature of truth, particularly photographic truth, its ability to believably manipulate the index of a photograph may shake public perception enough for them to begin asking foundational questions about representations of truth. If, then, these foundational questions are asked, it is only a matter of time before current, popular positivist notions of reality will be an inadequate foundation. In other words, people will stop searching for truth elsewhere, (for instance, right-wing television) and convert facts into their own opinions.

Perhaps I am being too optimistic, but as the photograph becomes less and less a perception representative of truth, more people will begin to move beyond the out-dated positivist notion of reality and away from a blanket-assumption of externally existing truth. Though on the surface this may seem a feeble campaign, just a century ago, an airplane couldn’t cross the Atlantic, just a decade ago portable music only came on a CD, and just a year ago, Facebook was just a fancy toy. Technology, though we rarely think about it, shapes the way that we interact with reality. When technology changes, it affects the way we see the world. As the ability to manipulate the indexicality of a photograph develops further, our popular perception of truth and reality, at the very least, may be called into question along with it. Just imagine a world where Jon Stewart and Glenn Beck could walk hand-in-hand on the beach without such media polarity separating them. Or, if you still can’t envision it, don’t worry, five minutes in Photoshop can make it happen anyway.