Burke + Norfolk: Photographs from the War in Afghanistan 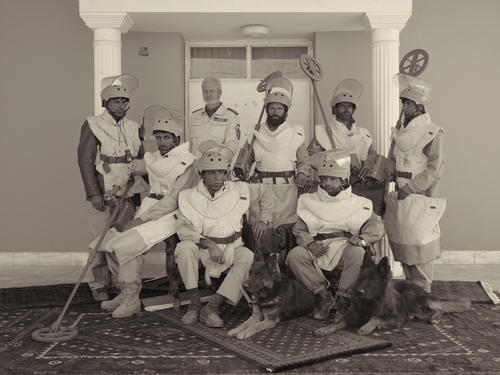 What is the purpose of photography? This is a question that emerges, implicitly, towards the end of Simon Norfolk’s talk at Newcastle’s Side Gallery about the 19th century photographer John Burke and Norfolk’s own work responding to Burke’s. The two photographers both worked in Afghanistan, Burke in the 1860s and Norfolk in the past decade. Norfolk says that he was trying to find a photography that penetrates the surface of appearance, that most photography provides only that surface; that he was, thus, more interested in what the war means rather than simply depicting it.

In this Norfolk seemed to me to be missing something. He talked about how he detests common photography and films from Afghanistan, often from those embedded with the troops. It’s certainly very true that that variety of visual reporting does focus very much on the soldiers and the fighting, and Norfolk’s own photography admits a much greater range of content, portraying the urban landscape of Kabul and the Afghan people alongside the international workers and their bases. However, he seemed too dismissive of everything else, almost as if he was crediting his own work a little bit too much. Whilst he didn’t name a particular work or photographer/filmmaker he disliked, I’d imagine he was thinking of something like the documentary Restrepo – which is a potent, thought-provoking, raw piece of work.

Norfolk, then, certainly had an established approach to photography, and a firmly politicised one. This does not detract, however, from either his work or the exhibition. He began his talk by describing John Burke as ‘the greatest war photographer you’ve never heard of’, and made a strong case. Burke is certainly a forgotten talent; only fourteen of his albums (which were never published, being available solely from his own shop) survive. The Queen owns two, and amongst other owners are the British Library and the National Archives of the USA, indicating his importance – but then Norfolk explains that Burke has never been studied, and nothing is written down about him. Indeed, oddly for a photographer, not a single photograph of him exists. He is a lacuna in his own work – perhaps believing strongly in the photographer’s role as simply an objective eye, whose own existence should be written out of what they document altogether. 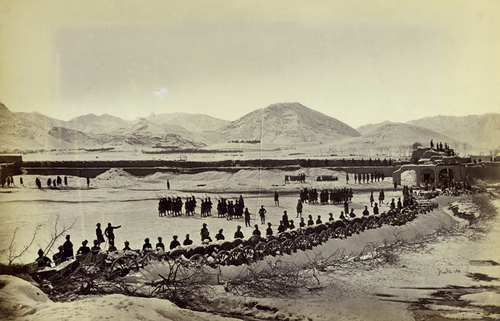 Burke was rejected for a British Army commission in Afghanistan in the 1860s because, being Irish and a tradesman, he was not seen as a proper person for the job. This, paradoxically, made him: freed of the requirement to carry out his work in line with army requirements, he was able to record everything, not restricted to imperial propaganda as other contemporary photographers in Afghanistan were. Norfolk refers to his ‘humanist eye’ – Burke’s photographs do not display the clear hierarchy of contemporary imperial photography not just in Asia, but Africa, the South Seas, and elsewhere. Afghans are shown in their own resplendent dress with British officers either in the background or not present at all, unlike other portraits of the time that placed the colonialists front and centre, with natives standing at the back as servants.

Norfolk explains how these portraits are often in the same location, indicating that Burke invited Afghans to make appointments for portraits, allowing them to prepare and come in their own time, or choose not to be photographed at all; contemporaries would sweep through markets and force Afghans into such pictures. Norfolk points out how this latter sort of portrait would be consumed back in Britain, emphasising the superiority of the Empire; it’s a strong reminder of the socio-political effect photography can have, even without modern doctoring methods.

The exhibition itself mixes Burke’s old photographs and Norfolk’s contemporary ones in an understated manner, leaving the viewer to make the connections. This works in a subtle but effective manner. A photograph of Burke’s, for example, shows a large group of soldiers descending a hillside; next to it, we see a picture of Norfolk’s displaying a large convoy of supply lorries for the modern international coalition. The only captions throughout the exhibition identify the subject of the photo, generally making no comment; it’s left to us to see how little things have really changed, a point Norfolk makes in his talk when he mentions that the current conflict is the fourth, broadly speaking, Anglo-Afghan war. He talks of how Afghanistan’s ‘eternal problem’ is that it’s a crossroads, a gap between two nations that, like Iraq, doesn’t work as an organic nation. In the 19th century it was the buffer zone between the Russian and British empires; in the 20th century it was a buffer zone between the spheres of Western and Soviet influence; now, more than Iraq, it has become the symbolic battleground between Western and Islamic values, at least for those who support those particular brands of ‘Western’ and ‘Islamic’ values. That becomes evident in his work, as groups of Afghans are shown alongside pictures of looming, gaudy Westernised commercial buildings. 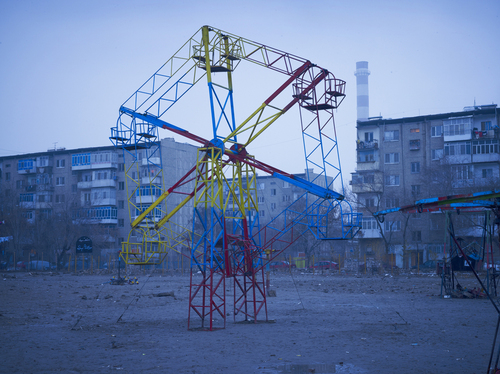 More than anything else a sadness comes out of both sets of photographs. The older ones already show ruins of once-magnificent buildings being used as military encampments, an Afghan leader ignored by a visibly haughty, sneering imperial ambassador; the newer ones include two pictures of real desolation, a Soviet-era ferris wheel in front of rundown apartment buildings, the colour washed out to a homogenous grey-blue, and a cemetery full of rough, angular gravestones, almost indistinguishable from a wasteground. And here’s the point: the appearance of these photographs is what’s important, the effect coming from the angles, lighting, and subjects Norfolk finds. Photography is about appearance; that doesn’t mean that it’s meaningless or thoughtless, the point is surely to use photography and the different appearances of things to say something about the world. I might have disagreed with Norfolk about that- but his and Burke’s photographs of Afghanistan do achieve it, and are certainly worth checking out.

Burke + Norfolk is on till 4 February 2012 at the Side Gallery in Newcastle; visit the site here.