Botticelli at the Uffizi 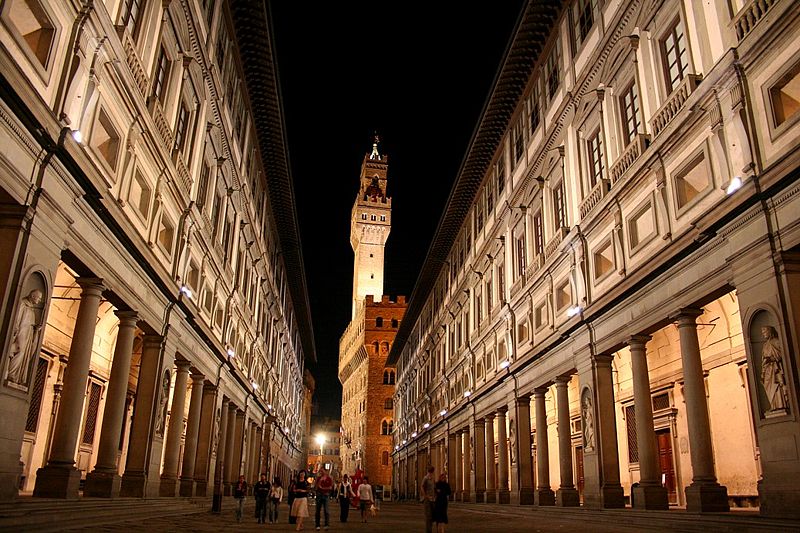 Would a trip to Florence be complete without a visit to the Uffizi Museum? Certainly no art fan would walk by one of the oldest and most famous galleries in the world. The Uffizi houses works by many old masters such as Leonardo da Vinci, Titian and Raphael, and this summer I was lucky enough to see them in the paint!

The building itself is unmissable. Walking through its courtyard you can’t help but be struck by the imposing beauty of its two neoclassical wings, which narrowly frame the clock tower of the Palazzo Vecchio just behind. Unfortunately, the columns also framed a four hour queue to the entrance…

The Uffizi is set out chronologically from the 13th to 18th Centuries, the most prized collection being those from the Italian Renaissance. Despite the expansive time period art at the Uffizi belongs to, the rooms have very strong unifying themes, and the vast majority of art is of Christian subjects. The collection is massive and over time I couldn’t help but become habituated, and sort of anesthetised, to the amazing quality of art which would stun on its own because they all look… so very similar! This however was not true for the Botticelli room which was a breath of fresh air, albeit a famously recognisable one.

On entering the Botticelli room the monumental canvas of The Birth of Venus (1482–1486) sits on the right wall and the even larger Primavera (1482) faces you; Botticelli’s two most well known works. After seeing so many photos of these paintings you wouldn’t suppose they could be surprising, yet they are! The sheer scale, the Primavera measuring 6 ft 7 by 10 ft 3, and quality makes you realise they’re the real deal, lovingly slaved over by the brush of Botticelli.

The subjects of The Birth of Venus and Primavera are unusual for the time as most artists portrayed Catholic imagery. Amongst the thousands of representations depicting virginal Mary viewers can really feel the bravery of Botticelli’s beautifully sensuous images. Botticelli was part of the new humanist movement, individuals interested rediscovering and rejuvenating knowledge of the past. Classical works such as the mythology of Ovid and Horace can be seen in the paintings of Botticelli’s “Pagan phase”. We are very lucky these paintings survived, due to Botticelli’s friendship with the powerful Medici family, as many of his other pagan works were burned by the Catholic Church.

Botticelli’s style of paintings was also uncommon for the 1400’s; there is no focus on realism usually found in Renaissance painting, for example in works by Raphael or da Vinci. Instead the perspective is flat, figures showing little volume or shadow, and the colours are unrealistically bright pastels. Proportions are also exaggerated, Venus in both paintings exhibiting an impossibly long neck to add elegance and grace.

I love so many things about these artworks; the fantastic brightness, intricacy and light touch they display but most of all their symbolism, some of which is still ambiguous today. 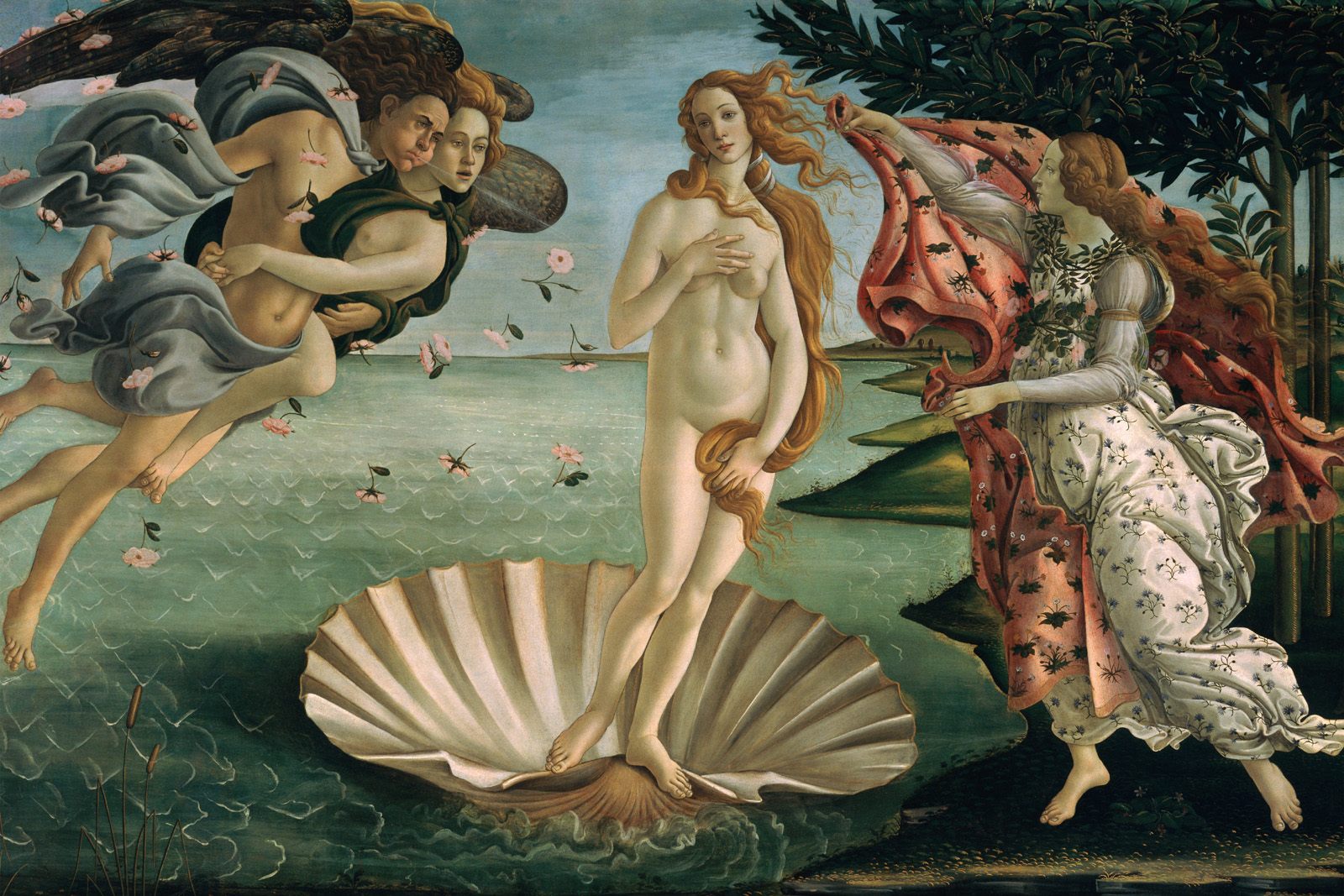 Botticelli’s The Birth of Venus

Everyone is familiar with Botticelli’s Birth of Venus, but far fewer are aware of the whole myth. The Greeks told that Venus, the goddess of love, was born when Uranus, the personification of sky, was castrated by Cronus and his manhood thrown into the sea. This then became Venus who emerged fully formed from the sea. Botticelli’s adaption of the myth however was probably more directly inspired by his contemporary Angelo Poliziano’s telling of the Myth in ‘Stanze per la Giostra’ (1475) based on an ode by Horace. One line from this in translation reads: “You might swear that the goddess (Venus) came out of the waves. Her right hand covering her breasts, she wants to enthrall us. And wherever she plants her divine foot, flowers spring up to greet the skies”

In the picture Venus stands demurely with a dreamlike expression on seashell, blown ashore by Zephyrus, the God of Winds, and Aura of the gentle breezes in a whirlwind of flowers. Ashore a Horae, a Goddesses’ of the seasons, stands with a flowing robe ready to receive and cover the naked Goddess.

I would like to think the picture had more private resonance to the painter, which can perhaps be supported by the fact the model for the Goddess was Simonetta Cattaneo de Vespucci. 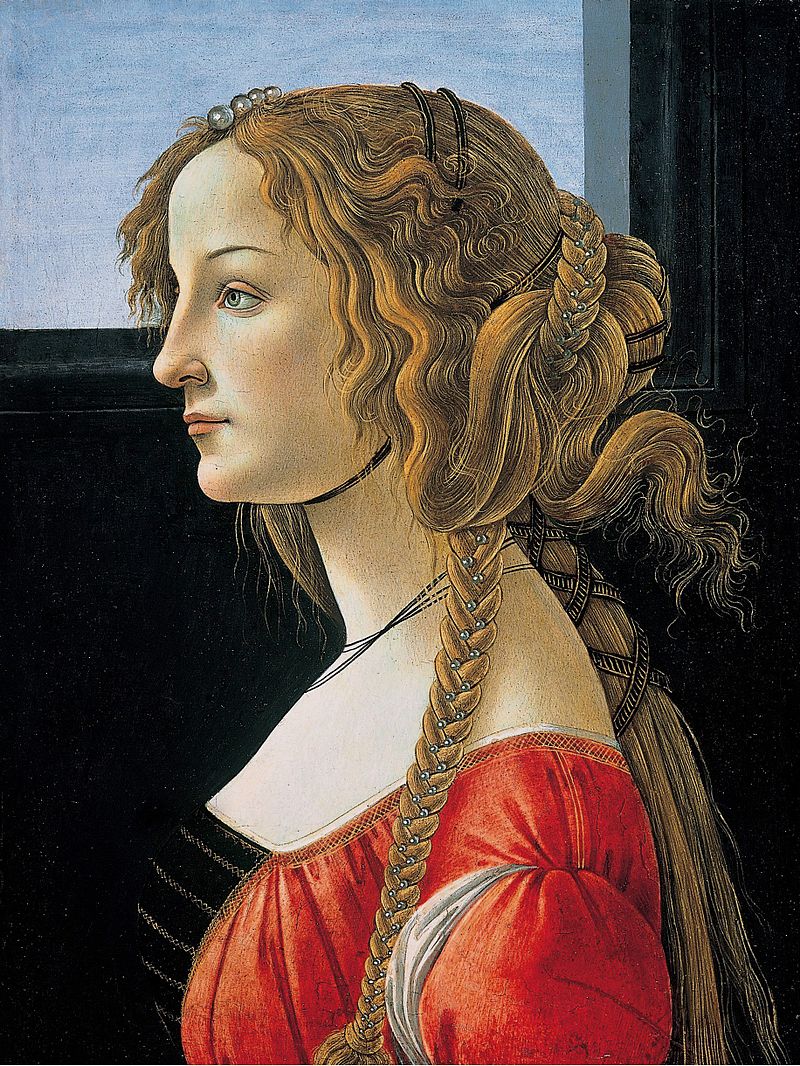 Portrait of a Woman, supposed to be a portrait of Simonetta de Vespucci

Simonetta was a beauty of the Medici court in the typical Renaissance style; full figured with long golden hair. She was often painted by Botticcelli, for example in the portrait above, and rumours of the time suggest the artist was passionately in love with her. When Simonetta died at the young age of twenty-two, Botticelli elegedly pleaded to be burried at her feet.. The model herself is supposed to have come from Portovenere (‘The Port of Venus’) mythologically the very site of Venus’ birth. Simonetta may be posing as Botticelli’s personal Venus.

The subject displayed in the Primavera (1477–1478) meaning ‘spring’ is much more ambiguous and one of the most widely debated images in western art. 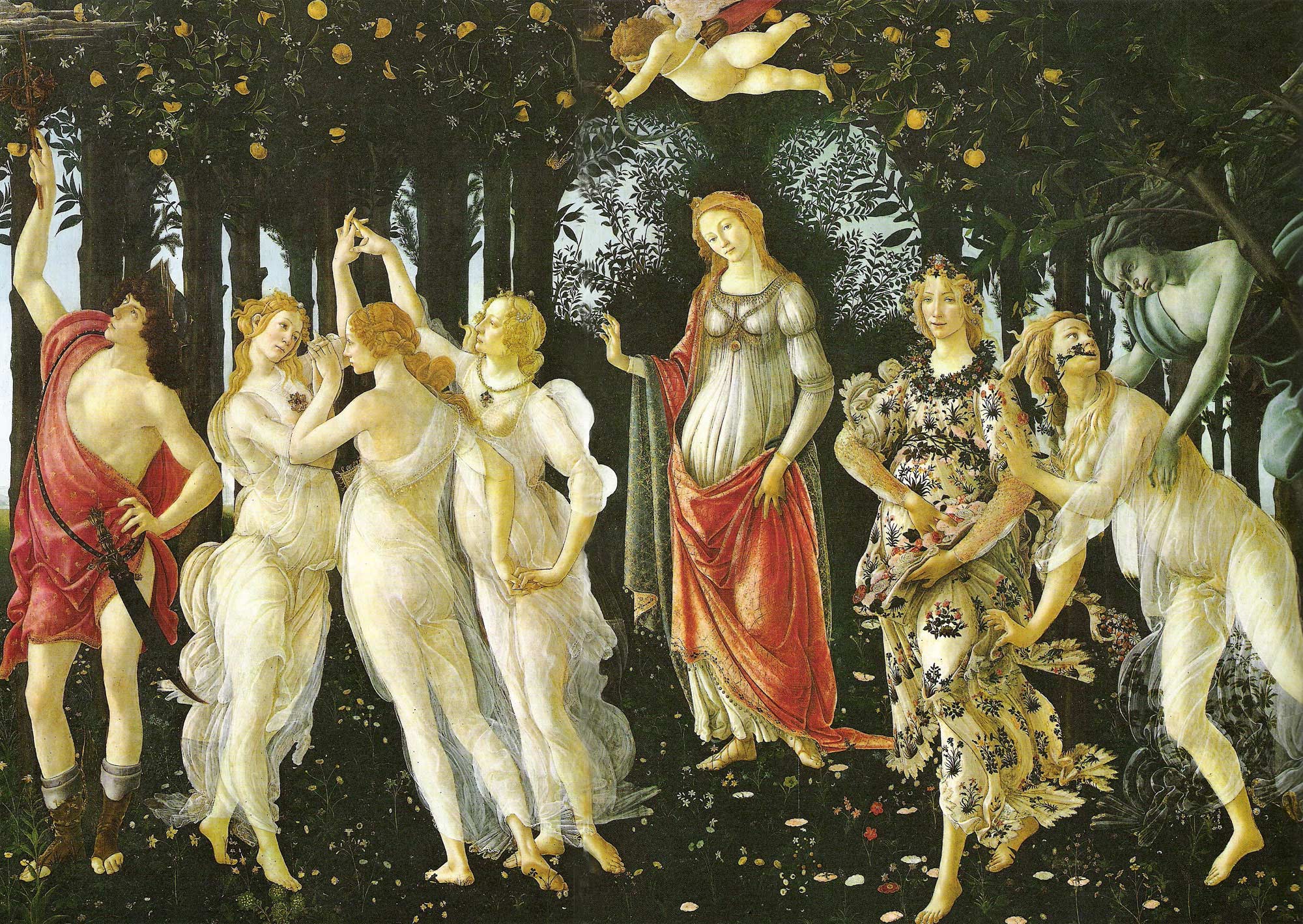 One interpretation of this picture is that it symbolically represents aspects of love and marriage, which seems very plausible as it was a gift to a bride of the Medici family. The figures to the right of the picture could be Zephyrus, the god of the winds, flying in from the right to kidnap Choris who he later marries and transforms into Flora, the goddess of flowers. This is indicted by the flowers emerging from Chloris’ mouth and also the presence of Flora herself to the left. This depiction of an initially unwilling marriage blossoming would have been relevant to the time as many marriages were arranged. Venus, standing at the centre of the piece, was patron Goddess of marriage and fertility as well as love, and her matron clothing could be an indication her role in this sphere. The three Graces dancing to Venus’ left could symbolise a myriad of female virtues such as beauty, fertility, and chastity. The marriages Chastity is symbolically threatened by Cupid, Venus’ son, hovering at the top with his bow poised. In much mythology Cupid shows a distinct lack of morality, often causing trouble with his power to make people fall in love and breaking apart marriages. Plants displayed also have symbolic meaning; myrtle traditionally representing desire, marriage and child bearing and oranges fertility and children. You may notice there are no oranges depicted above the unmarried Chloris and Zephyrus. This is transmitting the view that sex, and later children, should only be in the context of marriage.

This however is only one interpretation of the picture. Another popular view is that Primavera represents the bountiful coming of Spring, as the name would suggest. At the far left Mercury disperses the clouds of winter away from the Graces who represent March, April and May. Flora, scattering flowers to the right, represents the coming summer which is presided over by Venus, stood central, due to her association with fertility. To the right of Venus Zephyrus carries off Chloris, representing the cold winds of autumn and winter yet to come. None of these characters however can be identified for certain, and the name of the piece, Primavera, is a modern addition. We have no idea how Botticelli himself referred to this painting.

This mystery however adds to the charm of the piece, and allows us as viewers’ freedom in interpreting! Both works, whatever Botticelli’s intended meaning, are universally acknowledged as two of the most beautiful images ever painted.