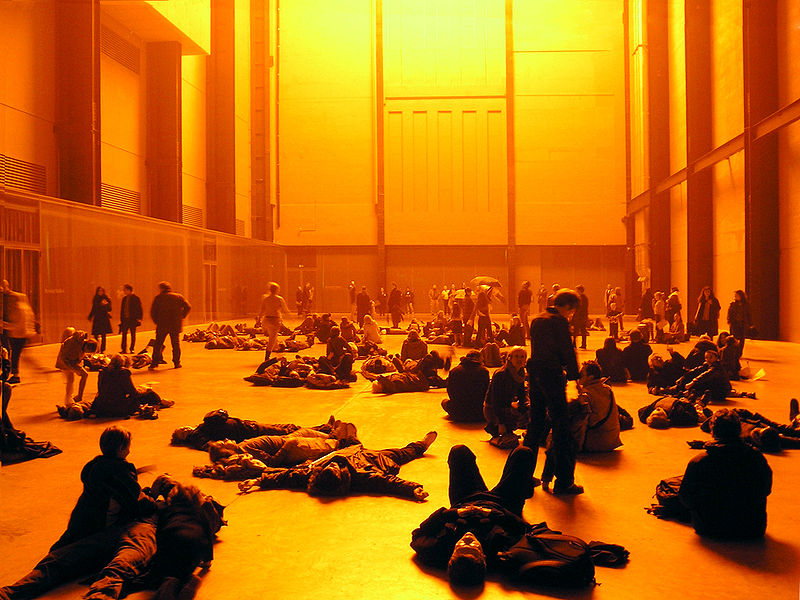 The Weather Project by Eliasson

It is a bleak, uncompromising, iron-girded space that’s got “gritty industrial history” stamped all over it. Most of all, however, the Tate Modern’s Turbine Hall is big – really big. It is probably the largest indoor space which you or I will ever see graced by a single, coherent piece of art – and the task of adequately filling it with such has become “the most formidable artistic challenge for anyone, anywhere in the world” (according to the Guardian). In the words of artist Louise Bourgeois, who had the first go at taming the Turbine, “Do you dominate it or are you dominated by it?” Time for a rundown of three artists who have boldly squared up to the challenge of unadulterated space in the Tate’s Unilever Series, and, in one way or another, made a virtue of it in their work.

To begin with its current artist in residence, the Chinese conceptual artist Ai Weiwei has conjured up a multitude of sunflower seeds with which to carpet the Turbine Hall, in a work (aptly) titled Sunflower Seeds. Now, it must be said that Sunflower Seeds does not quite live up to the legacy of its most immediately visually arresting predecessors. Indeed, when I come to see it, my eager eyes are met with an unassuming collection of what appear to be little grey pebbles. There are a lot of these pebbles, certainly, but still…

Of course, these are not really mere pebbles I see before me – closer inspection, rather, reveals individually crafted porcelain replicas of the eponymous seeds. And there happen to be over one hundred million of them, forming a thick layer which the exhibition blurb informs me constitutes “a poignant commentary on the relationship between the individual and the masses”. Indeed, the longer I stand in close proximity to them, the more it seems that the very unobtrusiveness of Weiwei’s installation might just be a stroke of genius in itself. For rather than subjecting the entirety of the space in the Turbine Hall to his vision he has left it be, impersonal and forbidding, his art not even presuming to cover the full floorspace. The vaulting ceilings seem almost to overwhelm the huddle of seeds (can there really be one hundred million of them?), and surely this generates a much more complex response to his evocation of the human condition than if, say, he had piled up more imposing human-size seed replicas. As it is, this grey mass of apparent sameness is stripped of much overt gravitas, its total insignificance within its greater context boldly asserted. And yet, this perhaps makes the very real small-scale uniqueness of the seeds all the more poignant and precious. In their quiet hand-made glory and packed-together solidarity, they seem to imply a prescient lesson in living in a world which science and technology have made much smaller, in its relation to the universe as a whole and in our relations with each other.

While the effect of Weiwei’s work partly depends on his judicious reverence towards the untamed vastness of space, previous artists have dealt with the Turbine Hall in quite different ways. In The Weather Project, for example, Olafur Eliasson eschewed conventional ideas of the art object to create a more dematerialised experience which is not at all confined to the perusal of a delimited object but is mediated through an entire atmosphere (in both the “weather” and “ambience” senses of the word). Although atmosphere in a narrower sense is certainly integral to the impact of Sunflower Seeds, the crux of Eliasson’s work was the atmosphere created by the combined effect of his mists, mirrors, and that beautiful glowing semi-circle. These elements effected a total transformation of their ex-industrial environment – indeed, they created a new environment, which allowed visitors to live in a heightened state of awareness of their being-in-the-world as they responded to the space as a whole. The vastness of the Turbine Hall was again used to great effect; though here, rather than dwarfing the viewer as a metaphor for an empty universe, space wrapped her up in its softness, and made her feel like its constituent part. This work can be seen as the evolution of abstract expressionist ideals – for the gigantic canvases of Pollock et al., bereft as they were of compositional focal points, enabled the viewer’s total immersion in art, as if it were an alternate universe. And Eliasson has reached a pinnacle in this artistic endeavour: if an artwork has no borders at all, there can be no limits to its power to envelop.

In contrast to Eliasson’s all-over approach to space, Miroslaw Balka’s How It Is was on one level a work which trumpeted its own boundaries. Rather than engaging with the whole of the Turbine Hall it sat squatly, defiantly within it, a ramp leading into a pitch black steel chamber. Given space, he created claustrophobia – slightly perversely, it might be thought. However, as with Sunflower Seeds, my first impressions were radically altered after the work had disclosed its full significance. Indeed, How It Is depended to a very great extent on the viewer’s temporal experience of the work, in addition to its spatial presence. You walk nervously up a ramp into this chamber, mentally turning over several cattle analogies, and are soon plunged into a darkness through which you tentatively feel with increasing unease. Finally, your fingers brush a wall, and for want of anywhere to move forward you turn around – and suddenly a gush of sublime relief vies with the ridiculous as the light which has all the time been entering the chamber meets your eyes, along with the sight of other approaching fumblers. I found it all rather akin to a journey into the darkest recesses of the mind, or our collective past, with the enclosed chamber in this huge space functioning as a symbol of the extent to which mankind personally and politically limits itself through fear and repression. Here at least, the close proximity of the Turbine Hall guarantees redemption: once you’ve made it out alive from the chamber, the space in which everyone has room to grow becomes a sheer joy.

When the defining character of an art space is its space, “site-specific” takes on another level of meaning. Happily, however, the artists above have risen to the challenge presented by the “big-ness” of the Turbine Hall and incorporated it into the core of their art, which would lose some or all of its impact if shown in smaller arenas. More so than most artworks, these are not self-contained objects to be looked at and critiqued as vessels of fully-formed ideas: instead, the meaning of a work is transferred to the viewer, who feels it directly as a lived experience. Visitors of the Turbine Hall might stand in the oppressive space of a lonely, impersonal infinity; feel comfortingly enveloped by their environment; or explore the strange spaces of consciousness, its constrictions and freedoms. Either way, it is clear that art is at its most dynamic and compelling when the playing field is super-sized, and I for one can’t wait for the next fix.