On the anniversary of the birth of Toulouse-Lautrec… 24th October.

One of my first encounters with art was a kitsch reminiscence of my mother’s youth in Paris. It was a tourist poster depicting a Toulouse-Lautrec print hung in our guest loo, that she had bought in the 1980’s with the intention to appear cosmopolitan and cultured. For many reasons, it left me mesmerised and was the source of much long contemplation. 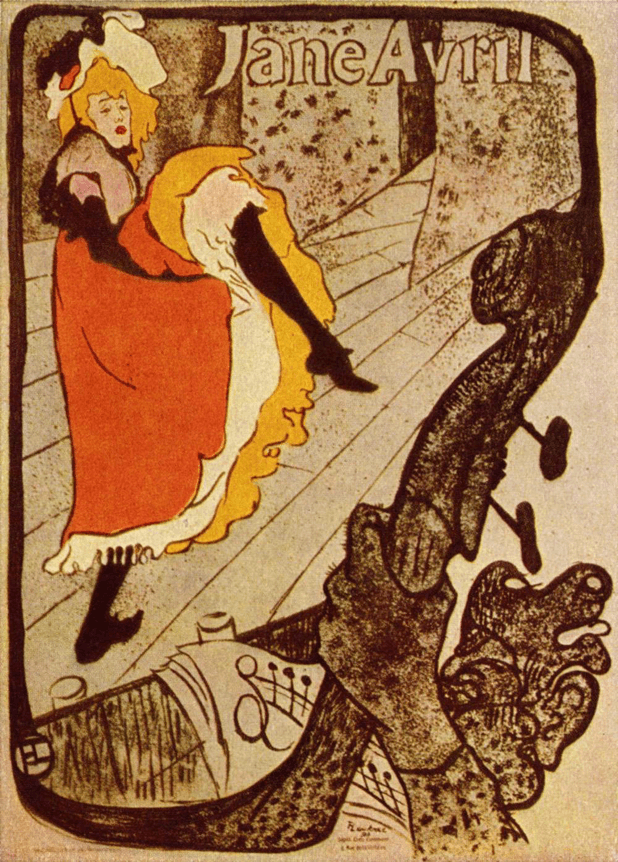 The composition is awkward; it clearly announces that the subject matter is Jane Avril, the lady dancing the cancan, yet she is not pictorially centred. Instead, a dark musician takes up almost half of the space; not to mention the flattened and skewed perspective, achieved largely by the rather insistent conflicting diagonal lines.

The image also conveys a certain sense of flawed beauty, which may even be seen as melancholic. She, the showgirl, is indeed both elegant and expressive; her legs and thin ankles are elongated; her hair is as lush as her underskirts. Yet there is a certain crudeness to her figure in the thick contours and large blocks of plain colour. After a closer look at her face it becomes clear that she is not young, but of a certain age – her face is heavily painted.

Henri de Toulouse Lautrec did have a faiblesse for the duality of modern life. Paris under La Belle Époque, the period is which he was active, had undergone a fundamental demographic shift due to Baron Haussmann’s restructuring of the city. Narrow streets and medieval buildings were replaced with what we today associate as typically Parisian: large bourgeois apartment blocks and wide avenues. Deliberately arranging the city structure to please the winners of the industrial revolution, the Parisian city centre was now inhabited by the nouveau riche bourgeoisie.

Montmartre however, where the Moulin Rouge – among many other fashionable establishments – were located, was spared by Haussmann’s grand architectural master plan, and therefore became the dwelling of the Parisian underclass. It was the home of hobos and hookers. It was also this new urban underclass which the new entertainment business relied upon.

Returning to the original image, Jane Avril, its subject matter, was the personification of this new class of women. As a cabaret artist she did to some extent experience a greater sense of freedom and mobility than respectable women, who were restrained to the home unless chaperoned by a male relative. She could also afford being relatively honest and outspoken; her song lyrics were often daring, bordering on vulgar.         Toulouse-Lautrec adored Avril, and he portrayed her several times, both for advertising and in private sketches. Another iconic portrayal of her was in the poster he produced for the café-concert Divan Japonais. In essence, she represents the Parisian demi-monde; impeccably dressed, she socialized among the chicest crowds, but nevertheless as an unmarried woman of low rang she led a harsh life. 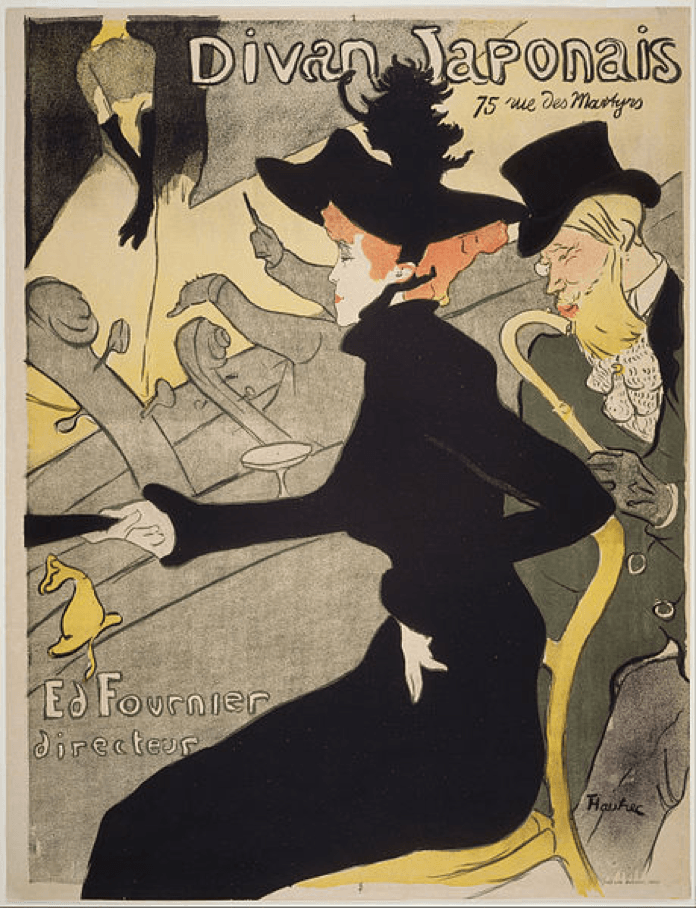 Behind the scenes of the glamorous soirées, prostitution flourished. Baudelaire, rather ironically, described the oldest profession known to man as the essence of modernity: love and sexuality being sold as commodity. Fathers would accompany their adolescent sons to the brothels and finance the ceremonial transition into manhood; some of which developed into luxurious establishments which extensive selections of women and sexual services. Toulouse-Lautrec famously dedicated a great deal of his artistic practice of depicting les filles de joies.

Similarly to Degas’ brothel scenes, Toulouse-Lautrec’s paintings and sketches are characterized by affinity and warmth. An outsider himself, due to his appearance and physical disabilities, he might have related to these girls and felt at home in the outskirts of society. Toulouse-Lautrec was born and bred into an aristocratic family and raised accordingly, and as his parents were first cousins he came to suffer from congenital health conditions. By adapting a Freudian reading to his works one might deduct a search for a family, considering his parents’ failed marriage. Even though he did engage sexually with the prostitutes of the brothels he frequented, records describe him as being well liked and sharing in their everyday lives.

Furthermore, the subject matter of courtesans and spheres of entertainment can be directly traced to Japanese printmaking. In the 1860s, with Japan opening its boarders for wider trade with the West, le style japonais became one of the highest fashions.  Toulouse-Lautrec, being particularly interested in lithography and print, was heavily inspired by ‘Ukiyo-e’ Japanese woodblock prints. His characteristic black lines, flat blocks of bright colour, and expressive faces are all derived from Japanese aesthetic. Notably the cutting of the edges for a photographic effect was also adopted from Ukiyo-e prints.

Nowadays considered icons of Montmartre and Parisian leisure, Toulouse-Lautrec’s works are perhaps most synonymous with the tourist industry rather than the fine arts – at least his posters seem to be. Even though originally intended as advertising, they still manage to convey a very honest depiction of reality. Behind the gay and the glam hints a gloom of decadence.

Today (24th November), on his 152nd birthday, I still find his description of Parisian stunningly adequate – naughty, rough, but ever so alluring.