“And now it haunts me”: George Shaw at the Baltic 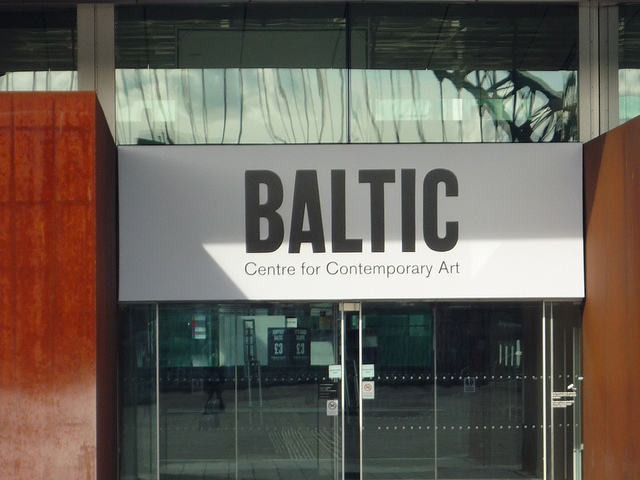 A friend and I wandered into George Shaw’s two exhibitions at the Baltic more or less by chance a few weeks ago. We hadn’t planned to go to the iconic riverside venue; we simply needed something to do after lunch. However, we both came away very glad that we had decided to see what was on there that day.

Shaw had two exhibitions at the Baltic, one of which is still running. The first, smaller exhibition (which is on till 12 June) is Payne’s Grey, a series of paintings all in the eponymous shade of paint. The second, much larger retrospective of Shaw’s work was called, enticingly, The Sly and Unseen Day. Though the latter has now finished, I highly recommend checking out Shaw’s work. Both exhibitions have catalogues published by the Baltic which are likely available in other art bookshops, or you can get a preview on The Guardian’s site here.

I had never heard of Shaw before, but would definitely keep an eye out for his work in future. We visited Payne’s Grey first, which made for a good taster for the main exhibit. The paintings in both exhibitions are entirely of Tile Hill, the Coventry estate where Shaw grew up. One might think that the exclusion of any colour besides grey might make the paintings somewhat dull, and certainly I have heard that opinion voiced. We enjoyed the exhibit though. The shade and nature of the paintings beautifully express the menace and isolation of modern British suburbia. There are never any signs of life in Shaw’s paintings – no people, no animals, just their detritus, the scenes almost post-apocalyptic (the landscapes would not be out of place in Cormac McCarthy’s The Road, or the film thereof). Considering the vast, drab wastelands of suburbia that carpet much of Britain this seems quite apt.

It’s notable that in an interview with The Guardian Shaw says of Tile Hill that “I haunted the place and now it haunts me.” These washed-out paintings have a very haunted sense. Dead trees abound, and the absence of people recreate the eeriness of these environments. There’s also that sense of isolation and shutting out I alluded to before: one painting focuses on a brick wall between two houses, the gardens beyond closed off from our sight. Another shows a row of very typical post-war suburban houses blockaded by another wall. The ubiquitous grey shade perfectly suggests the neuralgic, overcast despondence of the endless identikit suburbs; for some reason I thought of the Futureheads’ song Thursday, that same sense of tedium and depression present throughout.

The Sly and Unseen Day (which has a full colour catalogue with notes and interviews) was, as I’ve indicated, a much larger exhibit of several rooms. These paintings are more colourful – Shaw used Humbrol paints, commonly used by children to paint models, for them. The same sense of eeriness and gloom hangs over these paintings, but there is more here for the viewer who perhaps finds Payne’s Grey slightly too heavy. There is a definite sly wit in these pictures, such as in Landscape with Dog Shit Bin, where the verdant scene is centred around the bright red bin of the title, parodying the typical romantic pastoral landscape. Summer Holiday features prominently a “No Ball Games” sign, offering a silent comment on the oppression authority forces on childhood, and indeed play in general. Dead End (Thursday) makes explicit the Thursday feeling I mentioned above.

These paintings also occasionally break the suburban miasma. Some, like Pig Wood, display more sunny scenes in the woodlands around the Tile Hill estate, finding the beauty that sits alongside the dull squalor of the surroundings. The First Day of the Year has the first, gentle rays of sunlight striking the houses and leafless trees, the promise of hope and renewal as the year begins again apparent. Ash Wednesday: 7.00 a.m. repeats the trick with the sun now more firmly risen, implying the resurrection that is celebrated at the end of Lent. Lowlife works in an especially intriguing way: from a distance, it appears to be a person (or possibly one person holding another) in a heavenly light from above. Close up, one sees that the “person” is actually an outflow of effluence from a subterranean drain, and the heavenly light is just the weak sun coming through a skylight. The quietly recurring religious imagery of the series suggests the possibility of faith, redemption and grace in even such a locale as Tile Hill. The painting’s title when placed alongside the actual image of the painting promotes the “lowlife” to something higher and more ethereal.

Shaw’s choice of scenes and focus are the most significant thing about his work. This is the estate where he spent his childhood, a place he remains fascinated by. Like most fascinations, it is neither wholly positive nor wholly negative. He finds both the hidden danger, threat and darkness of the estate, and the occasional beauty and hope of the place. If I have one complaint, it would be that I don’t think he necessarily needs to exile people from every painting: whilst his art is very much about the physical imprint of humanity and the landscapes we create for ourselves, the presence of at least some actual humans would possibly add something to the overall effect, as it’s hard not to wonder what sort of people actually dwell in Tile Hill and make it the place that comes through in the exhibit.

However, overall, I was very taken with Shaw’s work, much more so than a great deal of modern British art (Tracy Emin, ahem), and the fact that he clearly doesn’t feel the need to be outrageous or in-your-face about his creations and message (if there is even meant to be one, straightforward message) is refreshing. Both exhibitions also proved that there is very much still life (no pun intended) in simple painting, in an age where installation art is very predominant. I’d recommend seeking out his work for yourselves.

Payne’s Grey runs until the 12th June at the BALTIC Centre for Contemporary Art in Gateshead (a 25 minute walk from Newcastle’s Central Station).

You can buy the The Sly and Unseen Day exhibition catalogue from Amazon .