An Illuminating Experience from Working Behind the Scenes at Lumière 2011 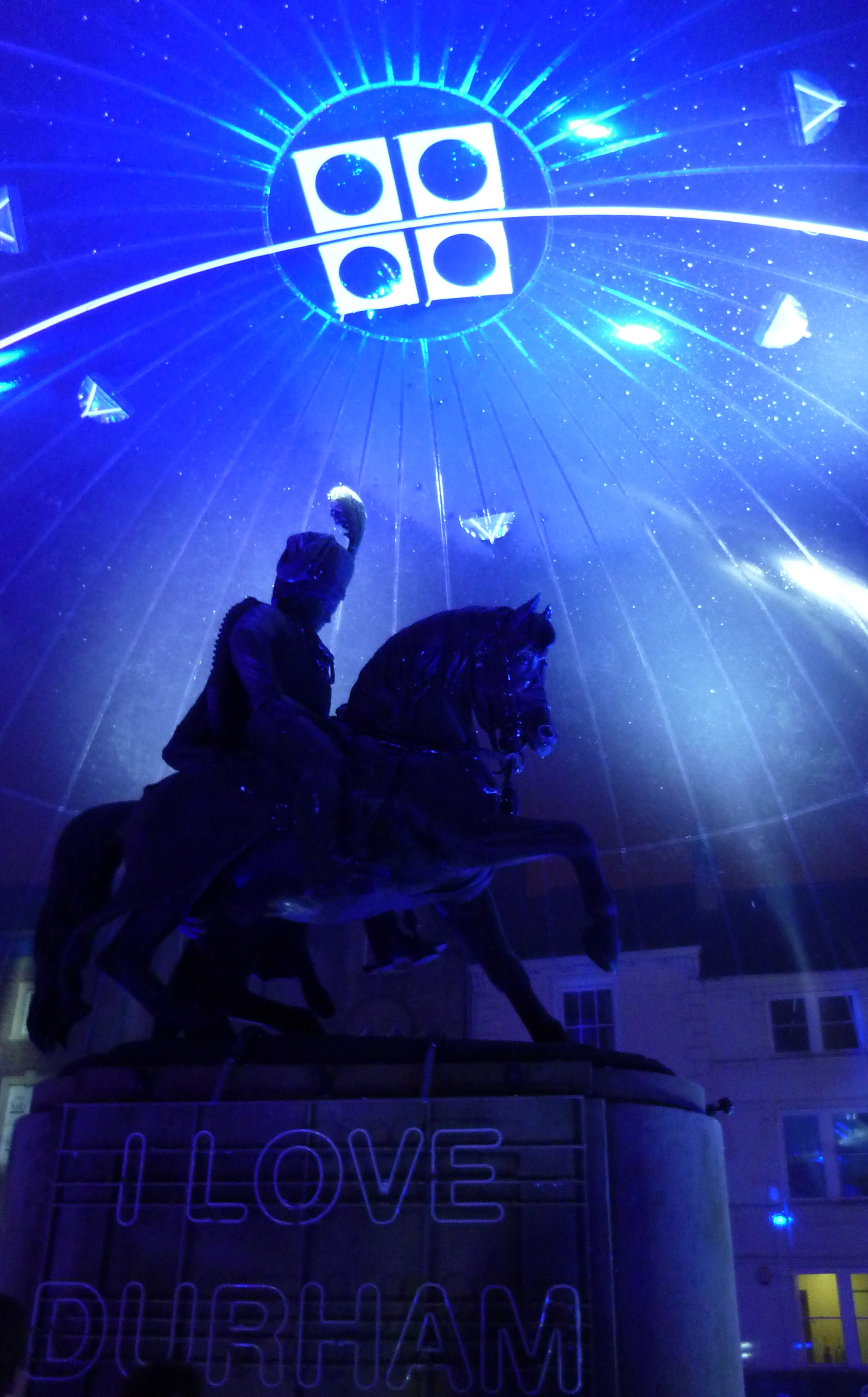 The view from the bubble: inside the snowglobe installation

At 6 o’clock on the evening of the 17th November colourful lights illuminated Durham, enthusiastic crowds of residents and visitors alike filled the historic streets of the city, and a parade of luminescent characters led the walkway to Palace Green. Lumière was coming to light in the most brilliant of fashions, and the festival had officially begun with eager eyes waiting to capture the entire program of magnificent installations.

However, for six North East Apprentices experiencing a mixed pot of emotions from pride and excitement to exhaustion and nerves, the festival was the realisation of a week of pre-production events, rather than an anticipated dream of the unknown. I, amongst five other giddy and enthusiastic people, was lucky enough to have been hired into a paid Apprenticeship by the creative production company Artichoke to assist with the duties involved in producing Lumière upon the team’s arrival in Durham. With endlessly long days and nights packed with tasks that challenged us both mentally and physically, by the end of our experience we were beyond exhausted, had our minds filled with knowledge attained from our project team leaders and were daunted by the fact that we were to step out of our bubble (in what you will read to be a very literal statement) and enter back into our day-to-day lives as students and regular employees of the normally-functioning world. The experience was unforgettable, and in all honesty, a more than valuable week of gaining expertise from a team of extreme talent, knowledge, and enthusiasm.

On the Monday before the opening of Lumière, we had been assigned our duties and designated to specific areas of the festival. With a Bachelor of Fine Arts degree from America and four years of student employment and fellowship experience in communications, project management, and editing, I was beyond pleased with being assigned to work within the communications front. To emphasise my luck, I was able to work with two inspiringly knowledgeable women within Artichoke whose Communications expertise is something that would seem daunting to anyone within the field, and most definitely the arts world. As I arrived every morning, it was evident that my supervisors and all others involved in Artichoke had been working relentlessly in the early hours, as it was ‘all hands on deck’ – everyone was in the midst of phone calls, meetings, printing tasks, frantic runarounds, etc. I was able to be witness to the never-ending work required by a Communications team in a production on such a massive scale. All I could do was walk in the door, take a second to soak it all in and before thinking too much further, jump in, ready to be swept up in the action. People running in and out of the Durham-homebase office, walkie-talkies sounding off with news from the outer world, and not enough tea and chocolate to last through to the next round – it was all a brilliant example of organized chaos! Situations and obstacles would spring up and without a breath, they were addressed. And as Jay-Z would say, although probably without any relation to this context, it was ‘on to the next one’. 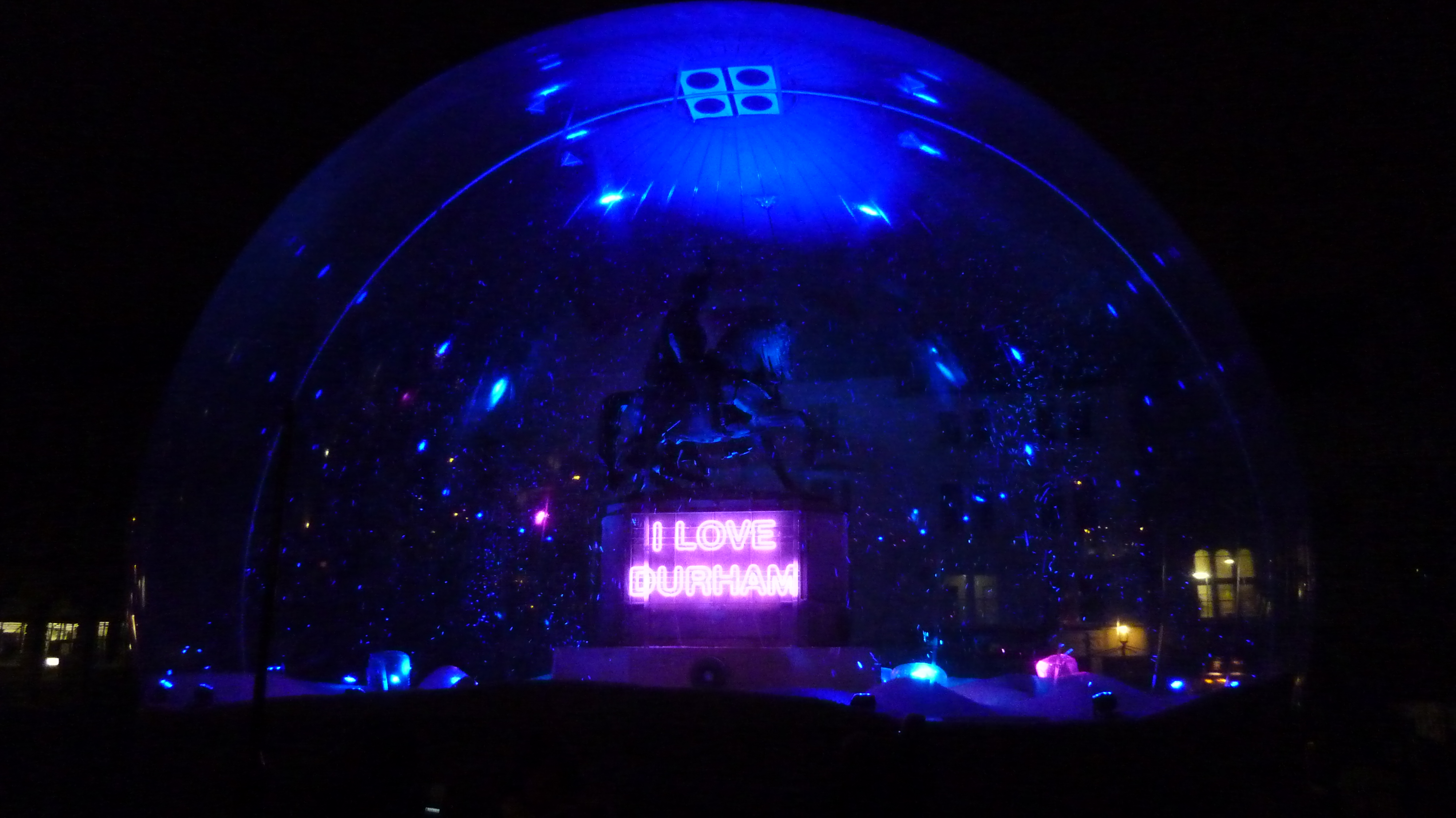 The snowglobe from a spectator’s point of view

What needs to be mentioned in all of this, is that from an insider’s point of view such as my own, it was always more than obvious that myself and the other five Apprentices were merely stepping into the final yet physically evidential portion of this event. From the time that Artichoke was asked to return to Durham for Lumière 2011, plans within Communications, Production and Programming, Finances, Logistics amidst all other departments, were being plotted out to a high degree of execution. This was not a snap-decision event, and not many free-to-the-public art festivals can compare in size and product. This is not me stating with utmost bias I consider this event to be the most amazing ever produced, but rather that in itself, it was amazing. What was lovely to experience was the passion and energy that all the Apprentices had for their roles, myself included. We were all from varying backgrounds and all hoping to engage in separate ventures in the future, but without a doubt we were more than appreciative and overwhelmed with gratitude for the minuscule imprint we had in this event in comparison to Artichoke’s inspiring team of employees, and all the hired management and team employees who truly made this event function.

Exactly a week after we had begun our Apprenticeships, we were all heading back to life with a unanimous expression summed up in that of a ‘sigh’. But some of the unforgettable highlights involved meeting the artists which, from an insider’s point of view, truly emphasized the passion being put into this production, and allowed me to realize the potential of public art – I climbed scaffolding whilst learning about an artist’s piece and the concept behind it (and whilst wearing a dress, mind you… not recommended, but very manageable for those wondering on the subject matter), spoke human rights with another international artist, and stood inside the massive plastic bubble of the 17-metre high “I Love Durham” snow globe as industrial fans blew styrofoam snow-chips around us in the largely amusing task of ‘clean-up’. I personally gained expertise and insight from some of the most talented and passionate people in the industry, and truly learned that my CV will only grow from here. Pursuing these types of work experience is so important as a student, especially for myself as a postgraduate student at Durham with hopes of developing a diversified range of knowledge through unforgettable opportunities such as this one. I would love to be able to list my specific duties, or specific experiences learned, but that is truly a difficult task in itself because it was so fully involved. I dealt with everything from enthusiastic participants, to complaints, to social media, to news updates, to varying enquiries, to assisting production heads, to discussing works with artists – the list is wonderfully endless.

It’s been a week since I finished my Apprenticeship, and what’s even more difficult for me to comprehend is that it’s been a mere two weeks since it all began! It was an unbelievable experience and such a thrill to be a part of a public art production so huge and so diverse. From working with Artichoke for the week, it is very clear that their knowledge and passion within the field is without range, and each one of the team members was committed to making it the best it could be. Just from observing the shocking amount of people that attended the event – an estimated 150,000 in four nights – it clearly takes a remarkable amount of courage (to put it politely) to even step-up to managing such an production. Lumière was broadcast to the world through BBC World, BBC radio broadcasts, and nationwide news sources, and it added another reason for Durham City to be paid attention to. Lumière 2011 merely highlighted Durham’s growing potential, but in a spectacular array of the neon variety and I am so proud to have been a working part of it!