The amazing power of light and colour in divine architecture

For thousands of years, people have been creating divine buildings that act and function as symbols of worship for a particular God and/or belief. From Greek temples to Gothic style cathedrals, it is incredible to see that despite the vast visual differences internally and externally, both forms of divine architecture have one particular aspect in common: they are united in their view that the use of light and colour (or lack of) are an essential part of the ‘experience.’ Light and colour have been used for centuries throughout divine architecture to create an ‘atmosphere’ of mystery, grandeur, expressivity and veneration, of which the overall aim and effect is to “amplify divinity.”(http://www.forbes.com/sites/johngiuffo/2011/05/13/the-power-of-light-in-la-sagrada-familia/#41244726b5b8)

Firstly, if we take look at some of the earliest examples of divine architecture available we can see how light and colour was employed even then to amplify divinity. Looking particularly at the Parthenon, perhaps one of the most famous and recognisable Greek temples today, this temple is unique in the sense that light and darkness are employed in opposition with each other in order to create the desired effect. For example, at the time of its creation the Parthenon would have been painted with bright colours that would have glistened in the midday sun. In contrast, there would have been a ‘dark black hole’ where the door was located which would have led to a cool, dark interior. (http://www.greece.org/parthenon/marbles/taylor01.htm) At the end of this dark interior there would have been an enormous gold and ivory statue of Athena (See Feature 1, which is a reproduction), which would have been lit by torches and indirect sunlight. This contrast of light and dark would have been extremely powerful, not only between the exterior and interior but also between the darker areas of the interior and the glistening of the gold in Athena’s statue. Consequently, all these contrasts would have focused all the attention on the grandiose statue of Athena. This would have highlighted to visitors the importance of the deity to whom this temple was dedicated, which would have inevitably “amplified divinity.”

Secondly, and fast forwarding into the future, we can see how light and colour are again employed to create a similar effect to the Parthenon. Looking specifically at the Sagrada Familia in Barcelona, a cathedral that mixes Art Nouveau and Gothic features into one, is also a place which uses light and colour in an incredible way. For example, starting with the interior, as you walk in you can see that the entrance is meant to represent a forest. There are tall columns which resemble trees, and tiny columns of light that poke through the roof – just like when light pokes through a forest canopy. In addition, along the walls of the cathedral, Gaudi used the traditional feature of the stained-glass window, but also put his own mark on them by expanding them to nearly two-storeys high, (See Feature 2). Consequently, the colour of these windows shines through onto the white-washed walls of the cathedral, creating an amazing effect. The use of colour and light in these two examples shows the grandeur and expressivity that Gaudi liked to use in his architecture. This creates an atmosphere of mystery and admiration, both of which would amplify this aspect of divinity. 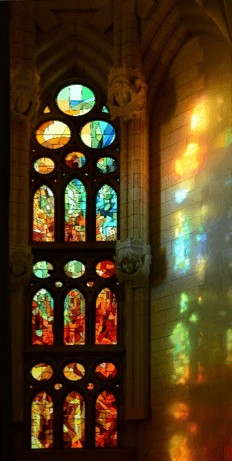 Continuing onto the exterior, and looking particularly at the passion façade (See Feature 3), the interplay of light and shadow is really important here. The passion façade displays the complicated days experienced by Christ before he died and was resurrected. The contrast of natural sunlight shining onto the cathedral and the subsequent shadow cast on the portrayal of the death of Christ emphasises the difficulty of the days leading up to his death. In this way, spectators are ultimately reminded of the importance and gravity of these days within the Catholic faith, which almost certainly amplifies divinity in a very powerful way. 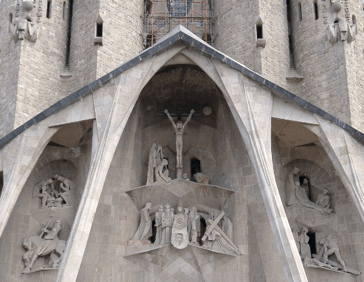 Overall, we can see that no matter what deity, belief or religion one believes in, light, darkness and colour are all employed in several different ways to create the same desired effect. For example, two completely different types of divine architecture used these methods in order to amplify divinity through the creation of an ‘atmosphere’ of grandeur, expressivity, mystery and veneration. In this way, this highlighted the symbols and statues within the temple/cathedral, and reminded visitors and spectators of the importance of them within their particular belief.