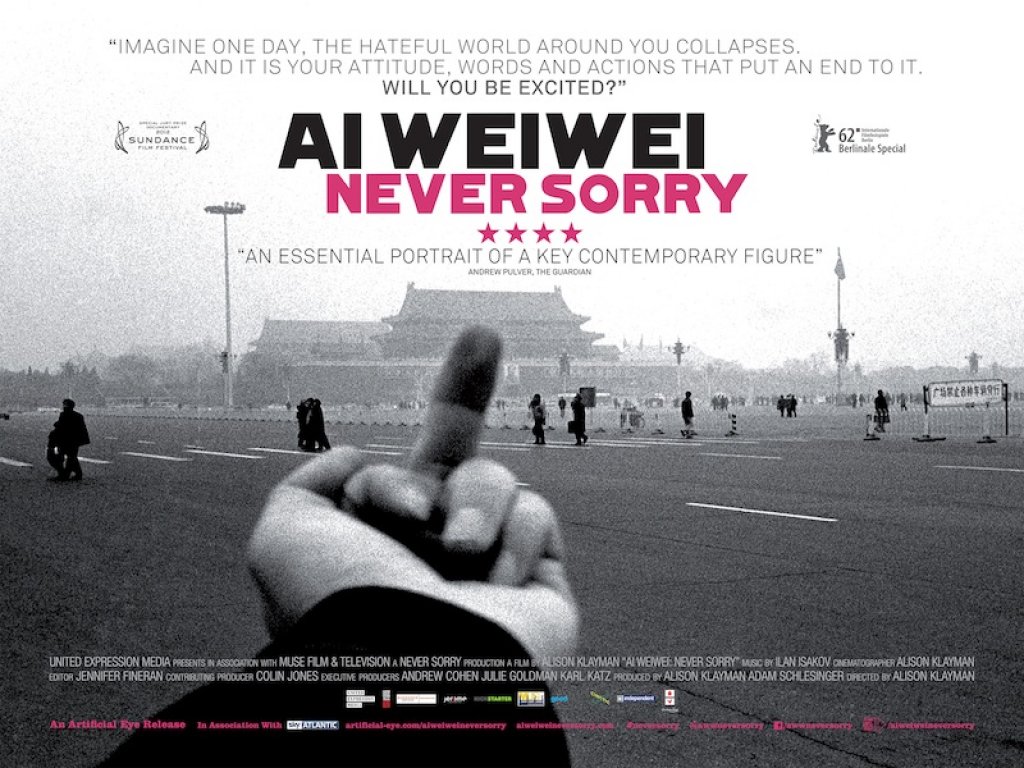 Currently Ai Weiwei, a Chinese artist, is using both art and social media to promote the fight for human rights and freedom of speech both within the Chinese society and the global society. The Chinese communist government has tried to repress his voice by censoring his work and detaining him. In this modern era, technology allows you to communicate your thoughts instantaneously to an unlimited audience; likewise, Weiwei uses his artworks to exhibit his ideas, and shares them shares through social networking sites in order to communicate his message and influence others, encouraging them to respond despite the government’s attempts to repress his voice. In Alison Klayman’s award-winning documentary about Ai Weiwei – Never Sorry – Weiwei is asked: ‘Why are you so fearless?’ He responded ‘I’m more fearful because I act more brave […] I know the danger is there, and if I don’t act, the danger will become stronger’ [1]. This sentiment affected me as a viewer because I realised that Weiwei wasn’t simply a mere artist but instead he is globally influential voice with a power that extends far beyond the borders of China.

Weiwei’s experience in China – and the way he uses art to comment on sensitive issues – is how he originally became a global icon. The embracement of other cultures in China was not as apparent in the 1990s and when Weiwei returned from having lived and worked in New York there were curious artists wanting to know more about American contemporary art coming to him. China was under great censorship by the government and this information was inaccessible. Access to foreign books, art exhibition catalogues or magazines were almost non-existent[2].

Therefore in 1994 Weiwei along with contemporary artists Xu Bing and Zeng Xiaojun published 3,000 books titled the ‘Black Cover Book’. They were randomly distributed around the country in underground secret systems and contained information about experimental artistic works of young Chinese and Western artist’s works along with translated texts from the likes of Marcel Duchamp and Andy Warhol. Later two more books were published; the ‘White Cover Book’ and ‘Grey Cover Book’ that contained more politically focused information[3]. Weiwei reacted against and the government’s censorship and provided artists in China with an education they would not have had otherwise. This was only the beginning of Ai Weiwei defying the Chinese government and influencing the Chinese society both artistically and politically.

On the 12th May 2008 China experienced an earthquake leaving thousands dead. The government refused to reveal the true numbers and names of those who had lost their lives. Many children died, including students of the Beichuan Middle School, which was poorly constructed due to the corruption of the government as they tried to cut construction costs[4]. In July 2009 Weiwei was on his way to the trial of Tan Zuo Ren who had been charged with ‘inciting subversion of state power’ by being an earthquake activist. Weiwei was on his way there to testify for Tan Zuo Ren when numerous police members broke down his hotel door and physically abused him[5]. He was detained for twelve hours without explanation and therefore was unable to attend the trial. As result of this Tan Zuo Ren was sentenced to five years in prison as no one could testify for him[6].

Weiwei was able to take a photograph with the policemen and within minutes it went viral, showing the power of media and Internet that Weiwei uses to communicate with the Chinese society and the world. One month later he was on his way to Munich when he experienced severe brain pains, upon arrival he immediately underwent surgery in which the doctors found a cerebral haemorrhage from when he was physically abused a month earlier[7]. Weiwei used the MRI scan to create the piece ‘Brain Inflation’. The image served as a reminder that China’s society is currently paranoid and too ready to turn trinity into violence. Weiwei believes that individuals can really use technology to communicate with a wider audience, especially the younger generation, to create a wide discussion. The technology used to reveal this brain damage and the tools to let it become viral are really the main reasons that people can be affected by his act – it brings to the surface what the Chinese government are trying to bury[8].

Weiwei has made the art world outside of China accessible to all Chinese artists with his secret Black, Grey and White books that document the likes of Warhol and others. Through these pieces of information Chinese artists were able to understand how others create art and also it was used as an educational tool to learn more about the world. Weiwei has caused a complete uproar within the Chinese government as they try and find new ways to deal with an individual who will not stand for a lack of human rights but instead will speak his mind and fight for what he believes, through both his art and spoken word.