Way down on the sunny South-Western coast of the UK lies the hidden gem of Falmouth Art Gallery, tucked away above the town library. With a collection of over 2000 works, this gallery is much more extensive that first meets the eye. That being said, their current Henry Scott Tuke exhibition, seated beside another exhibition of the works of Freud, Minton and Ryan, is a teaser to the huge scope and quality of the gallery.

Tuke is something of a Falmouth legend, one of the most renowned artists to ever live and work in the town. His characteristic Cornish scenes capture the beauty of the sea and its changing moods. The inclusion of nude figures in many of his paintings may mean that the bum:sea ratio in this exhibition is high, but this does not transmit into awkwardness. Tuke’s handling of colour and his loose hold on the paintbrush illuminates each piece from within, such that the body becomes a subject in harmony with the nature around it. The mesmerising irregularity of the gallery’s spotlights creates a very real sense that we are a part of Tuke’s sun-soaked scenes, as light bounces from one surface to another. This gallery lends itself perfectly to the pieces exhibited in it. Just outside, the sea rocks against the pier, just as it did when Tuke himself was living and painting in Falmouth. The arc of the gallery ceiling echoes the arched shapes of the boats in the paintings, while the intimate one-room space parallels the intimacy of his models’ nudity. The viewer is fully immersed in a sea of his works.

As was noted by many of the visitors to this exhibition, there is perhaps a sinister side to these beautiful impressionist pieces. Tuke, at the age of 60, was still painting naked boys only in their teens. The delicate brush strokes are wrought with objectifying, idealistic glamour, painting days of innocence and simplicity from the perspective of an old man. We can thank Tuke for carefully positioning his models such that their modesty is preserved, though the tingling awareness that something within the painting is purposefully hidden is maybe more suggestive of Tuke’s sexual awareness. Each of his models is fit and young, and for the most part are engaged in the act of sea swimming. ‘Summer Dreams’ and ‘A Bathing Group’, the first two pieces you see on your left as you enter the exhibition, are especially contorted and unnaturally poised. Free, yes. Young, yes. Desexualised, we’re not so sure. 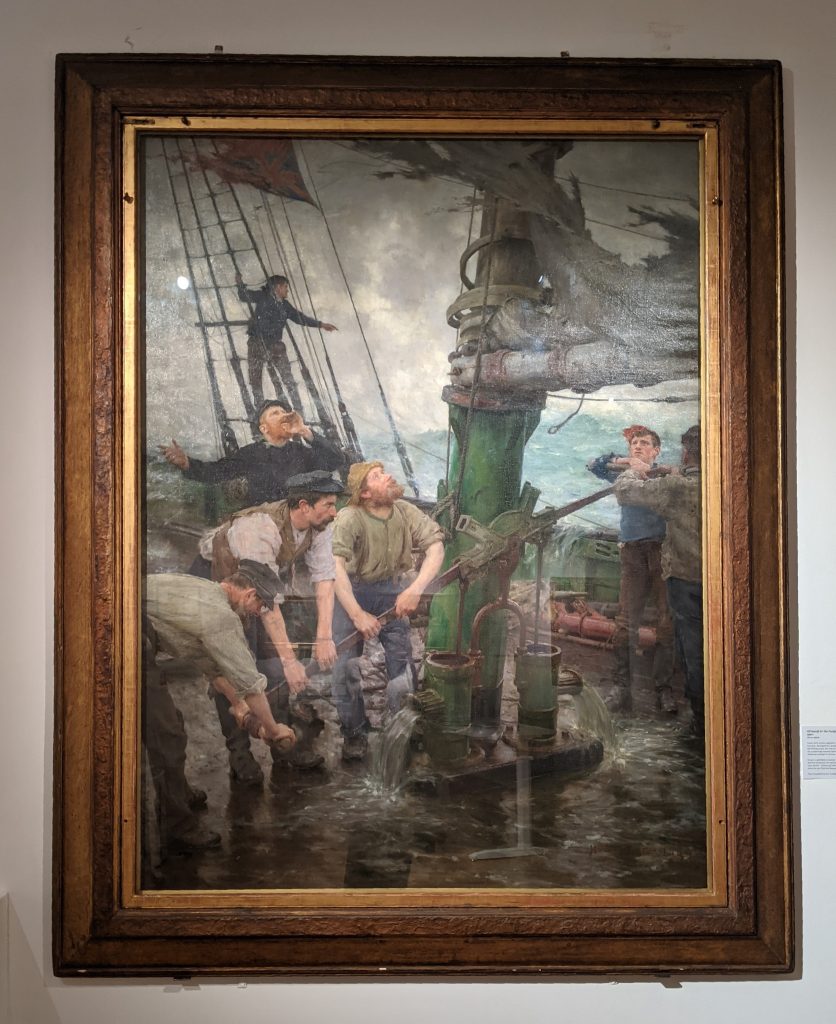 Henry Scott Tuke, ‘All Hands to the Pumps’ (photograph by Rachel Barlow)

If we overlook this uncomfortable question, however, these paintings are shocking more than anything for their stunning delicacy. The aforementioned ‘Summer Dreams’ uses soft blues and greens for shadows, contrasted by pale shifting sand, gentle warm orange and pink drops of sunlight. On the opposite wall, and framed by two extruding walls on either side, ‘All Hands to the Pumps’ transports the static boy of ‘Summer Dreams’ into an active and fiercely alive man. In a terrific scene full of movement and sudden stormy greys and greens, several men cluster on a boat, pulling at a pump. The idyllic, still waters on the paintings either side of this piece further the movement within the work; the sea, that uncertain beast, can change even in the time it takes to walk from one painting to the next. Darker colours and a strong sense of movement settles this work as the focal point – the epic crescendo – of this exhibition.

It is also worth noting the interjection of Tuke’s more formal portraits in this exhibition, including ‘Dinner-Time’ and ‘Our Jack’, bringing something of the dramatic Dutch to otherwise cosy English Impressionism. The light that seems to bounce off Tuke’s placid water scenes is almost absorbed by these works and their weighty darkness, a nod, perhaps, to the First World War which intervened during Tuke’s painting. It is to this exhibition’s credit that it does not stick (as it very easily could) to the idyllic, instead moving the viewer into a place of discordance by including this contrasting painting style. From boyhood idyll to the beginning of war, this ‘Dutch series’, as we might call it, forewarns the viewer of the dramatic shift towards the storm of ‘All Hands on the Pumps’, which emerges once again on to still waters with ‘August Blue’. These final paintings before the exit of the exhibition (if moving around it anti-clockwise) conclude the collection with a sense of unity, with scenes of boys working together on boats, paddling and swimming: the calm after the storm. 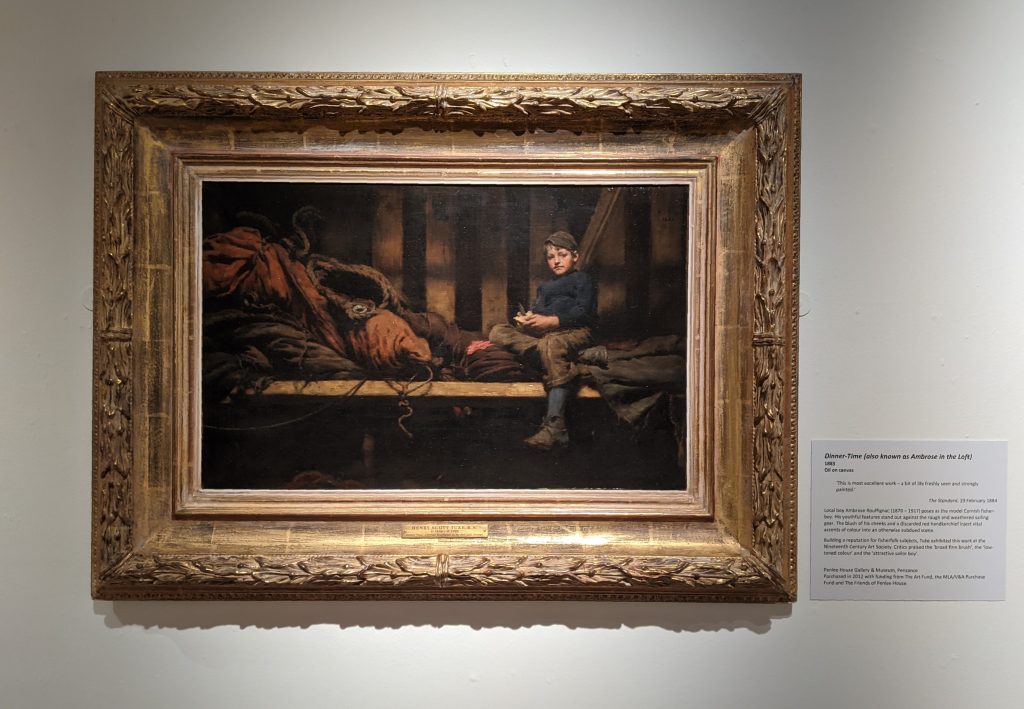 This exhibition has a wonderful sense of immersion and growth, documenting the movement from placidity to drama, a demonstration of the skill of the curation and organisation of the gallery. Viewers are given a glimpse into the varying emotional tones of Tuke’s work, and the scope that his impressionist style allowed. As all of us at Durham settle into another term of fierce academic study, I think it’s valuable to seek out all of the hidden creativity around us, whether that’s as far away as Falmouth or as close as the upcoming Lumiere Festival. Art and beauty is out there, just waiting for us to see it.