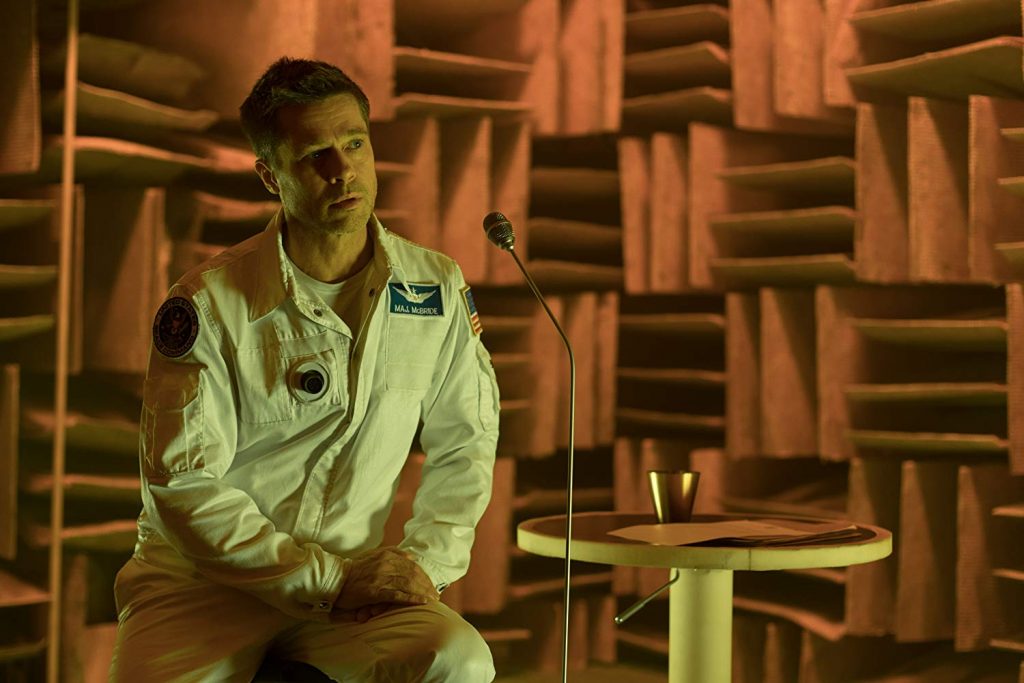 In the past decade, we have seen numerous space films on the big screen: Gravity (2013), The Martian (2015), Arrival (2016), and now Ad Astra. The title, translated from Latin, means ‘to the stars’, a shortened version of the phrase per aspera ad astra, meaning ‘through hardships to the stars’. Along with a budget of an estimated $87,500,000 and a cast consisting of Brad Pitt and Tommy Lee Jones, from the outset this was going to be an ambitious film. And such ambition certainly paid off. Ad Astra has proven to be an immersive, intimate and insightful piece of cinema.

Brad Pitt plays Roy McBride, an astronaut on a mission to make contact with his supposedly dead father Clifford McBride (Tommy Lee Jones). It is believed that his father is still alive on a spaceship somewhere near Neptune and is the source of bouts of electrical waves being sent throughout the solar system, threatening life on Earth. Roy embarks on a mission which sends him travelling across space, encountering danger and conflict, resulting in scenes of tense action.

The film is set in the near-future, where science and technology have advanced considerably. Nevertheless, some things never change. Areas of the Moon have become sites of conflict over territory, while other parts are destinations for tourists who are able to fly there commercially with Virgin Atlantic. Clearly this is a society still caught up in struggles over resources, presumably still facing a climate crisis.

However, this is not an action film. The turbulent politics of future Earth simmer on quietly in the background. Really the dominant focus is the protagonist Roy. No one will be able to doubt Brad Pitt’s acting abilities after seeing this film. He brings charisma, subtlety and grace to the successful yet troubled astronaut. Roy peppers the film with steady, melancholy narration; guiding us through his inner thoughts with the same control as he has operating spacecraft. Moreover, Roy’s wife Eve (Liv Tyler) and scientist Thomas Pruitt (Donald Sutherland) act effectively as powerful foils against the seemingly emotionally unresponsive Roy. Tommy Lee Jones was the perfect choice for the glowering, haunted scientist. He is a constant presence throughout the film, allowing us to feel increasing sympathy for his son. The father-son relationship is highly convincing and moving. One only wishes the two actors shared more screen time.

Director James Gray claimed that Ad Astra will feature “the most realistic depiction of space travel that’s been put in a movie.” With this I can completely agree. The visuals of planets and stars are truly spectacular. Yet what really gives space its magnificence is the superb soundtrack. Gray apparently listened to ambient scores and electromagnetic wave transmissions from space while making the film. The music is a mix of these sounds and swooping orchestral scores (reminiscent of The Dark Knight trilogy), which prove to be both meditative and terrifying; intensifying the inconceivable scale of outer space and the absolute solitude one faces out there.

Visually, it appears to be no coincidence that I found a comparison with the film Her (2013). The same cinematographer, Hoyte Van Hoytema, worked on both films. He also worked on Dunkirk (2017) and Interstellar (2014). These films share a focus on the intricacies of an individual psyche within a system of epic proportions; and they do this with devastatingly beautiful colours and framing. One of the reasons that Ad Astra and Her are so powerful, is that the environments of both films engulf the protagonists within their scale and beauty. Roy and Theodore (Joaquin Phoenix) alike, are at once at home and outcasts in such vast spaces. In Ad Astra, there are alluring shots of planets, moons, and stars. Their colours dazzle us with their brilliance. Their size inspires both fear and excitement. 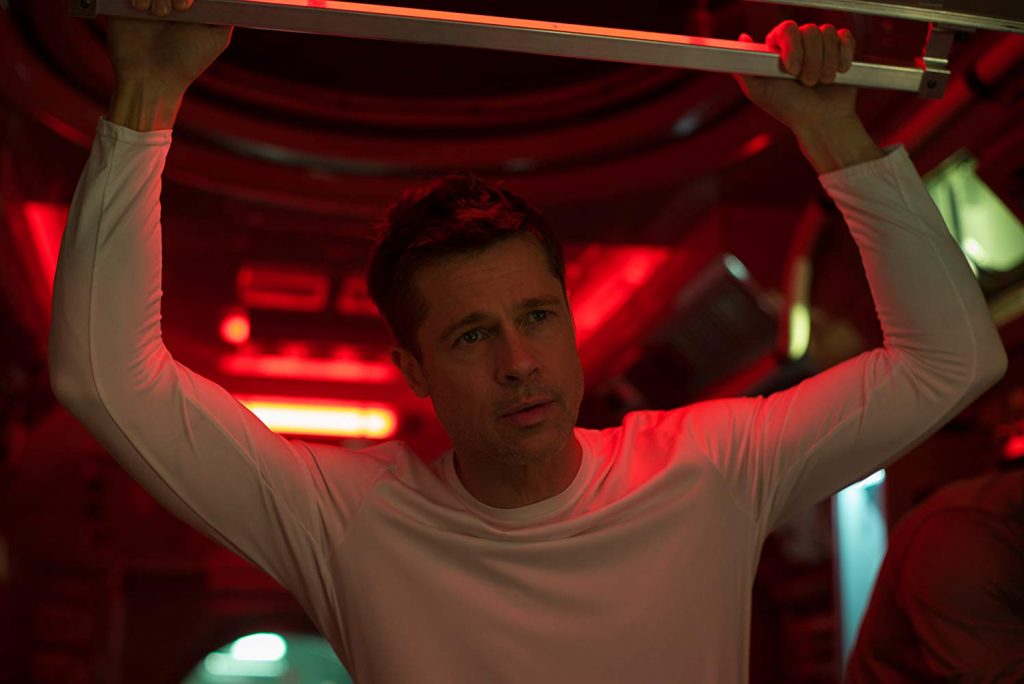 The block colours of many of the interiors are equally aesthetically pleasing. Comforting purples inside the commercial rocket to the moon and the orange fog of Mars are a few examples. Such colour palettes are clearly influenced by those in Blade Runner 2049 (2017). The stifling orange landscape of the deserted Las Vegas, where ‘K’ finds Deckard, comes to mind.

There are also similarities in the protagonists of Ad Astra and Her. Both Roy and Theodore (Joaquin Phoenix) struggle with profound loneliness and believe that they are happier surrounded by the inhuman (Roy’s career as an astronaut and Theodore’s relationship with his conscious computer operating system). Neither can connect with the other people around them and feel compelled to strictly control outward displays of emotion. In fact, Roy is explicitly rewarded for his ability to be in complete control of his emotions. The first act of the film reinforces the link between self-control and a successful career. Space exploration appears to be natural for the accomplished astronaut. His heart-beat never reaches high levels, in crises he remains calm and stable, he gives orders in a mechanical fashion (consequently putting fellow crew members to shame at their lack of emotional control). The constant automated psychological evaluations Roy has to complete and succeed in to progress, is emblematic of destructive patriarchal values. This is emphasised when Roy reveals his true thoughts about his father and the situation he has been placed in to the evaluation machine, and the computer simply confirms the completion of the test. When he tells his father that he loves him, Clifford remains silent. Displays of affection by Roy are always ignored. This proves to be detrimental as his success leads him to a place of utter physical and psychological loneliness. Roy McBride, therefore, joins a lineage of solitary men in cinema; back to De Niro’s Travis Bickle and recently to the Joker. This self conscious placement within a rich cinematic tradition, only adds to the film’s success.

Ad Astra has received criticism for having a rather slow and awkwardly-timed ending. I would agree that the ending should have come sooner and edited more tightly. However it still remains a fantastic film. As the credits roll, we are invited to revisit the meaning of the title. Instead of an uplifting sentiment to reach to the stars, the film has proved to act as a warning to those aiming too high. Perhaps we can see Roy as a modern Icarus: who following his winged father out of the labyrinth, only to find him driven mad by the mission he dedicated his life to. Upon reaching the stars, our Icarus realises that it is only on Earth that a fulfilling life is possible, and thus grateful for his fall: “Now we know. We’re all we’ve got.”