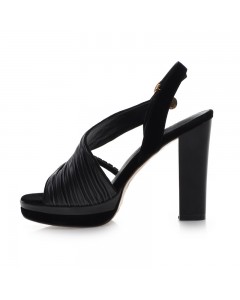 Hammer-toes, bunions, ingrown toenails, shortened calves, degenerative damage to the knees and ankles, damage to the lower back – any and all of the aforementioned problems may arise from habitual wearing of high heels.

If ever one needed to produce empirical evidence to wave triumphantly in the face of a disbelieving verbal-sparring partner, to the effect that people have markedly different thresholds and tolerances for pain, one need look no further than the poles-apart reactions of women the country, and indeed the world over, to the wearing of high-heeled shoes.  Some can tolerate wearing them for hours at a time, while others find that the agony begins mere minutes after donning them. Two things are certain, though; one, the pain will start at some point – on average, after about an hour of wearing high heels – and secondly, that it will be excruciating when it does start. The unfortunate woman will be reduced to hobbling in the most minute half-steps, as if she had been subjected to Chinese foot-binding, only with shards of glass and sharpened razor blades dispersed among the bindings to inflict maximum damage.

Such paroxysms of torment ought to be recognised as a glaring signal that high-heeled shoes, especially spiky stilettos, have a positively ruinous effect on the body of the wearer. Hammer-toes, bunions, ingrown toenails, shortened calves, degenerative damage to the knees and ankles, damage to the lower back – any and all of the aforementioned problems may arise from habitual wearing of high heels. And the results, when they do manifest, are very far from pretty; there were at least two teachers at my old school, whom I will refrain from naming to spare their blushes, who never wore flat shoes to work. However, this did not stop them from taking their shoes off in the classroom, and conducting their lessons in stocking-feet – allowing us all to feast our eyes upon what appeared to be a golf ball welded onto each of their big toes. Such a self-inflicted deformity must have made the wearing of any shoes, flat or elevated, little short of a torturous experience. Do those five-inch Jimmy Choos still look quite as appealing and seductive as the glossy catalogues would have you believe?

Thought not. So why, then, do high-heeled shoes continue to be deemed so fashionable and indicative of status? Part of the answer rests in their having been historically worn only by the upper classes and royalty, male and female alike; as such a demographic was free to indulge in a sedentary lifestyle, rich enough not to have to perform horny-handed manual toil in the fields, its members could get away with wearing shoes that significantly limited their capability of labour. As such, the high heel became a shining beacon of exalted social status, and something to aspire to for the upwardly-mobile gentry, in the knowledge that the pain of wearing them is only exacerbated by actually having to move in them; when sitting still, although the pain is ever present, it is considerably more tolerable.

I can hear some disgruntled bearers of high heels already preparing the riposte that, surely, high heels were originally designed to keep women’s skirts out of the filth and muck of medieval streets, and thus that they served a practical function in addition to betraying the status of the wearer. Well, I’m sorry to disabuse the holders of that notion of it, but the fact is that they are mistaken. Pattens, to give those early elevated shoes their correct name, actually bore more resemblance to modern platform shoes than stilettos; they added two or three inches to the wearer’s height, albeit without bending the foot into the unnatural position into which it is forced by the more recognisable high heels, which only became popular after Louis XIV made them an item of unofficial uniform among his courtiers at Versailles. The worst one could suffer from wearing pattens would be a loss of balance and humiliating fall. This, of course, is equally possible with high heels, but the former item of footwear, unlike the latter, does not generate the same unsightly and painful foot deformities that often require surgery to correct.

Given the great weight of medical evidence showing high heels up to have only deleterious effects on the health of their wearers, it is all the more astonishing that in some professional circles, women are expected, nay, forced to wear such impractical footwear on pain of dismissal. I am, of course, alluding to Nicola Thorp, an office “temp” who, on her first day working for Pricewaterhouse Coopers, was sent home for turning up in flat shoes. I hasten to add that the policy of insisting that women wear high heels was not PWC’s, but that of Portico, the agency that supplied Miss Thorp to PWC. Nonetheless, the attitude shows a galling lack of consideration of the detrimental effect that such a dress code policy has, not only on women’s health, but also on their ability to do their jobs as efficiently as possible. As Miss Thorp’s duties as a receptionist included escorting clients to conference rooms, she was not in a position to ease the discomfort by remaining seated all day; had she meekly obeyed the demand that she wear shoes with a minimum 2″ heel, rather than challenging Portico’s dress code for women, it is not at all difficult to foresee that by the end of her working day, she would have been reduced to agonised hobbling, if not even a sprained or broken ankle borne out of the enormous difficulty of maintaining balance in stilettos.

It’s not just office staff who may find themselves compelled to wear high heels despite practicality and their own health demanding otherwise. Dress codes compelling female staff to wear them are common in the hospitality and restaurant sector; of those who have seen it, who can forget the photo of a waitress’ feet, bleeding severely and with obviously-ingrown toenails, at the end of a nine-hour shift the entirety of which was spent standing up and walking? Airlines are another common offender; as recently as last year, El Al came under heavy fire for forbidding its stewardesses from wearing flat or low-heeled shoes, prompting the stewardesses’ trade union to instruct its members to ignore the requirement. In the twenty-first century, amid a wealth of evidence proving that the health effects of high heels are wholly negative, there really is no excuse for such an unenlightened approach by employers towards this particular aspect of dress codes. If female staff positively wish to wear high heels to work, by all means let them so long as it does not adversely affect their ability to do their job. But to force all women to don them demonstrates an appalling restriction on their autonomy not to damage and deform their own body.