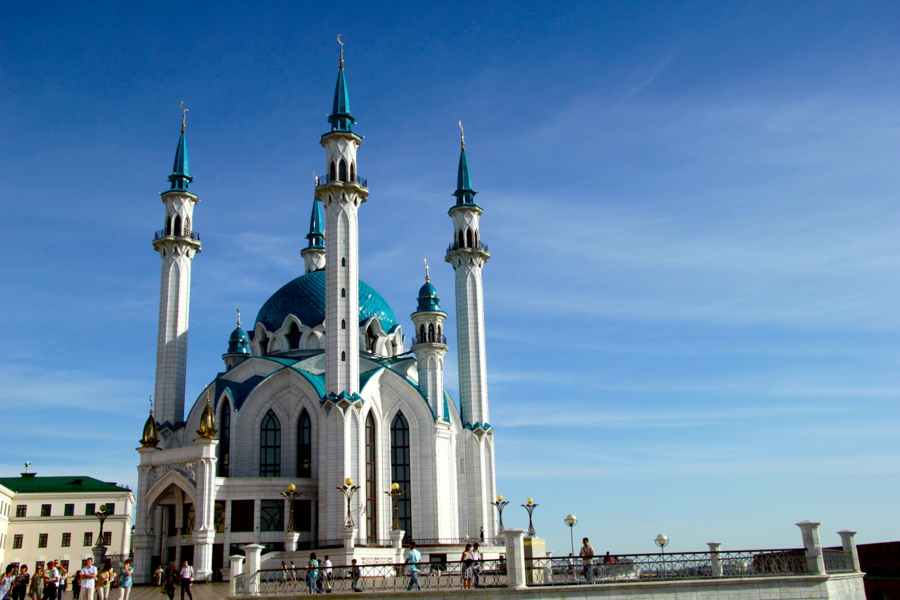 It’s fair to say that the past month has been the best by far of the ten and a half that I’ve spent abroad. The annual summer break from work and university has begun, temperatures are consistently in the 20s and life’s become that fast-paced, last-minute flurry to squeeze out every last drop of fun which comes with the dawning realisation that very soon – next Tuesday, in fact – all of this will be gone for good.

In amongst all the extreme museum-ing, day trips and picnics by the Moskva river, there’s been time to squeeze in visits to two of Russia’s more provincial cities, Yaroslavl and Kazan. I’d have felt something of a fraud to leave a country as geographically expansive and socially diverse as Russia having only set foot in its two major and infinitely more westernised cities. Whilst Moscow is the country’s political epicentre and St Petersburg celebrated as its cultural one, it’s easy to forget that there’s anything of value beyond them.

Both trips, in true Russian style, began and ended with a train, with Yaroslavl taking four hours (long hours, when you take into account the rock solid wooden benches) and Kazan lying a 12-hour sleeper train to the East. We arrived in Yaroslavl on Den’ Goroda, the annual festival celebrating the founding of the city. Having adopted a Muscovite’s cavalier attitude to the provinces, I’d expected something akin to a village church fete. However, it turns out that City Day, at least for the people of Yaroslavl, is kind of a big deal. It seemed as though every single citizen had ventured out to enjoy the brass bands and folk dancing, a very soviet-looking theme park and hastily-erected, dubious-looking scaffolding where men were invited to hang by the arms for 140 seconds in exchange for a cash prize or crate of beer. The whole town was in high spirits and just seemed to be up for a good time. Interestingly, this relaxed and disconcertingly friendly atmosphere wasn’t just confined to Yaroslavl, but was just as prevalent in Kazan. Within half an hour of arrival, we’d eaten breakfast at a small canteen where five well-meaning babushkas had directed us towards the tastiest food, beamed and declared me a ‘clever girl’ when I paid successfully and called me over from my table to give me four super-sized Bounties ‘as a present’. The kindness was overwhelming: where was the xenophobia, the shrieks to hurry up, and the death stares? It struck me how the ‘splendid isolationism’ which seems to be most Muscovites’ chosen outlook on the rest of the world is not the endemic Russian trait that I had presumed it to be.

As well as the change in atmosphere, it’s impossible not to mark the difference in the appearance between the major cities and the provincial ones. Stepping out of the train station in Yaroslavl, I felt as though I’d been transported back to the USSR. Unlike in Moscow where, particularly in central regions, enormous amounts of money have been pumped into giving the city a facelift to smooth out the most obvious soviet lines and communist wrinkles, Yaroslavl has had no such makeover. The city is comprised of block-upon-block of soviet flats, the unaltered street names still declare October Street, Revolutionary Square and the Boulevard of Enthusiastic Workers, street corners still boast the traditional statue of Lenin, long since done away with in the two major cities and the main attraction is a tiny, Stalin-era theme park in the city centre. The city serves as a stark reminder that, no matter how hard Russia tries to overhaul its image in the west, the twenty-one years that have passed since the collapse of the Soviet Union have been a meagre amount of time to change the face and mind of an entire nation.

In Kazan, however, it is religion which lends the city its fascinating appearance. Kazan is the capital of Tartarstan, conquered from the Tartars by Russia in the 16th Century. It is widely acknowledged as the city where West and East converge, with the main highlight of the city being a Kremlin which features both a beautiful, imposing Mosque and Russian Orthodox cathedrals. Road signs are written in both Russian and Tartar, restaurants and stalls selling local cuisine are commonplace and the influence of both Islam and Orthodoxy on the city’s architecture is profound. Being so accustomed to the prevalence of a single Russian culture, accompanied by a frankly often racist attitude to ‘otherness’, it was eye-opening to see two such very different religions co-existing harmoniously. Indeed, it was even more surprising to learn that the citizens of Kazan are generally deemed the friendliest in Russia.

The Russia evident in these provincial towns is just as much Russia as Moscow or St Petersburg. Indeed, experiencing them has served to adjust my perception of the country as a whole. Whilst life in Moscow may demand a cold, cut-throat attitude to the world, other Russians are amongst the most open and community-minded people there can be. Whilst a number of people may harbour racist or xenophobic beliefs, there are Russians happily settled on the ‘crossroads of culture’, with no desire to force the supremacy of either one or the other religions. These are the sorts of cities which could really change the most firmly-held of prejudices; it’s simply a shame that the state is too Moscow-centric to recognise the value of these provincial cities in the rehabilitation of Russia.