Whatever Happened to that Fellow Mitt? 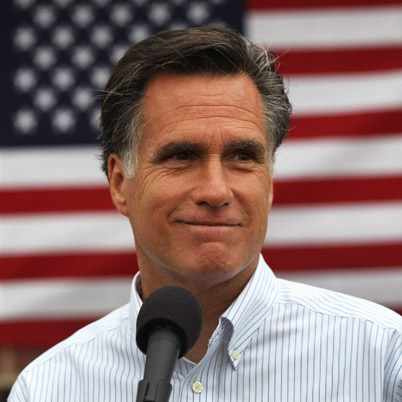 “Tomorrow we begin a new tomorrow”

A while ago, in the dim and distant past that is November 2012, an election was held in the United States where the incumbent President, an apparently amiable chap named Obama, trundled inexorably back into the White House. What few people remember is that he actually had a Republican opponent – a guy named Mitt.

Mitt is a pretty straight kind of fellow – a hard-working man from Detroit born with the terrible burden of being the son of a minor automobile industry executive who, in later life, would slip unnoticed into the world of politics as the Governor of Michigan. The young Mitt had a hard time, missing out on the Vietnam War (which he strongly supported) by virtue of two unfortunate student deferments and a poorly timed ministerial deferment while he conducted missionary work in the godless backwater of France, Europe. After a moderately successful career in business during which he had to subsist on a miniscule annual income of several million dollars, he entered politics and became Governor of Massachusetts for a little while where he proved remarkably liberal (an insult he would later strongly deny whilst seeking further public office).

Then came an opportunity for Mitt to try his hand as a candidate for the Republican nomination to the White House in 2008 – an opportunity that, sadly, passed by poor Mitt. Following a gruelling further six years of campaigning he eventually won the nomination and then endured months of unfair accusations about his tax arrangements and endless ridicule for his close and warming touch with the electorate. Eventually, after a tumultuous ride, he had his campaign crushed by the re-election of President Obama. But Mitt is not the type of person to let such things keep him down. Post-election, Mitt has bounced back – and avoided mentioning his defeat to anyone. For the first time he looks less like a grumpy cat wearing a fishbone-patterned jumper and more like a dog finally let out of his car-top cage. Any casual follower of American politics will undoubtedly have heard that President Obama invited Romney for lunch this week, in what was described by the Washington Post as a ‘longstanding tradition’ of re-elected presidents having friendly repasts with the person whose political dreams they have just obliterated. The official report stated that ‘their lunch menu included white turkey chili and Southwestern grilled chicken salad.’

One would think they could have served meat loaf. Mitt’s favourite food is meat loaf. Also, it is known that in his youth, Mitt loved practical jokes, and if Obama had really wanted to get in the spirit of things, he could have had Romney arrested by the Capitol Police in the White House lobby. The press were rightly kept far away from this meeting, although photographers did manage to snap a photo of Mitt opening his own car door, possibly for the first time ever. The President and the Mitt posed for an awkward-looking official handshake before having a discussion about “America’s leadership in the world and the importance of maintaining that leadership position in the future.”

The loser-comes-to-the-White-House-for-lunch tradition is an excellent tradition, even though it seems this was actually the first one in memory. George W. Bush didn’t invite John Kerry in 2004 (possibly because he couldn’t spell Kerry’s name on the invitation). Bill Clinton never gave Bob Dole a post-election roast dinner in 1996, though he did give him the Presidential Medal of Freedom (which was probably more enjoyable for Dole).

There was brief rumour before the lunch that Obama might offer Mitt the role of Secretary of Commerce in his new cabinet, which is akin to the British Secretary of State for Business, Innovation and Skills – the very influential Vince Cable’s job. It is true that Commerce is not exactly a power hub in most administrations, but presidents generally appoint people from the other party to cabinet jobs because they want to please the opposition. The minor problem with this suggestion is that, currently, the Republican Party has, at best, great antipathy towards its former candidate.

The idea of a get-together with Romney first arose during the president’s victory speech. He elaborated at his first post-election news conference, saying that Romney ‘presented some ideas during the course of the campaign that I actually agree with.’ The ‘actually’ didn’t sound all that enthusiastic, however. Also, when the time came to praise his former rival, Obama could only manage to admit that Romney ‘did a terrific job running the Olympics.’

Romney said nothing whatsoever about the rumours. Perhaps he’s reflected on his gifts for spontaneous comment since he told donors that Obama had won the votes of college-age women by offering them free contraceptives. Perhaps he has elected never to speak in public again. Certainly he didn’t comment after photographers snapped several photos of him riding on the Matterhorn and the Big Thunder Mountain in Disneyland. He can’t be in a good mood: his lifetime dream is rubble and he got 47% of the vote. He’s working out of his son’s office and filling his wife’s several Cadillacs with petrol by himself. And he now has to make his own peanut butter and honey sandwiches in the morning!

As Romney’s SUV approached the White House grounds, police stopped a man who tried to reach for the car yelling ‘Mitt! Mitt!’ It wasn’t clear what he had in mind. Perhaps he was an angry dog lover who still hasn’t gotten over the fact that Romney once drove from Massachusetts to Canada with an Irish setter strapped to the roof of the car. Perhaps he was a disappointed fan, eager to discuss the Tea Party’s clever plan to resuscitate the concept of a Romney presidency by organizing a boycott of the Electoral College. Perhaps it was Donald Trump leading his lonely march of revolution on Washington.

But the man was arrested. The SUV rolled forwards, driving Mitt toward the White House, and the white turkey chilli.