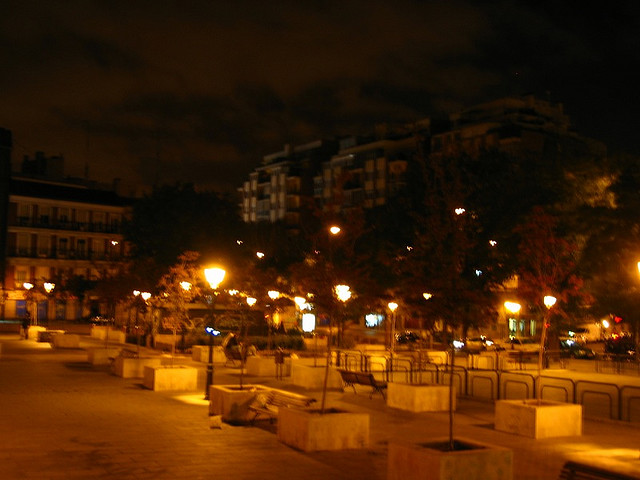 As darkness falls, the city truly begins to live

As the days get shorter and the cold starts to bite in the Spanish capital, I find myself entertaining nostalgic yearnings for the summer heat. Whereas August brought the frustrations of not being able to have a cup of tea, I now miss the days when it was hot enough to enjoy one of the hallmarks of a Spanish summer; the terraza.

My Spanish flatmate once said to me that he could live on a terraza; eat there, drink there, chat there, even sleep there. It really is a defining characteristic of Madrid. Nightlife you can get anywhere, but what you don’t get just anywhere is a street culture that transforms the city into a social hub for people of all ages. At the heart of this phenomenon is the terraza.

Terrazas are bars’ or restaurants’ outdoor seating areas that adorn the pavements of many a street in Madrid and indeed across Spain. Although relatively popular by day, it is when darkness falls that they really come to life, the heat of the summer months and the temperate autumn evenings making them perfect spots to enjoy a drink and spend the night chatting and watching the world go by.

The terraza is indicative of Spanish nightlife in general and of Spain’s title of one of the world’s most sociable nations. So fundamental is it to the Madrid cityscape and the psyche of its inhabitants that it has astonishingly continued unperturbed by the country’s desperate economic straits. During the summer months the streets of the capital were regularly packed, especially at weekends, with the buzz and lively atmosphere lasting into the early hours.

The street is where life is played out in the summer, and if people aren’t out spending their money on food and drink on a terraza, they’re perhaps indulging in a spot of the much-maligned bottelón. The art of buying your own alcohol and drinking it in the street to avoid paying bar-prices for drinks, Botellón has become something of a Spanish institution and continues to divide opinion. It has gained an image as an illicit binge-drinking session among 15 year-olds round the back of the BP garage, yet I’m going to speak out in its defence. The term botellón has adopted a much wider meaning, and in my experience a positive one; it can be when a public square or fountain, often alongside bars and terraces, is teeming with people of all ages, passing by or stopping to sit down and enjoy a drink. Despite technically being an illegal activity, there is rarely an air of illicitness, nor alcohol abuse and its effects. It is sociable rather than anti-social. I even saw a woman go past pushing a pram at 1am.

And that is part of what has been so great about Madrid; you feel comfortable wherever you are, whoever you’re with, and at whatever time of day or night. Don’t get me wrong, I love a night out done the British way, but I’m not sure I’d feel the same on a Birmingham back street at 4 am.

As we move into winter, I’m starting to miss the luxury of being able to sit out on a terraza all night in a t-shirt. Street life characterised summer in Madrid and it will be intriguing to see how it changes with the seasons.