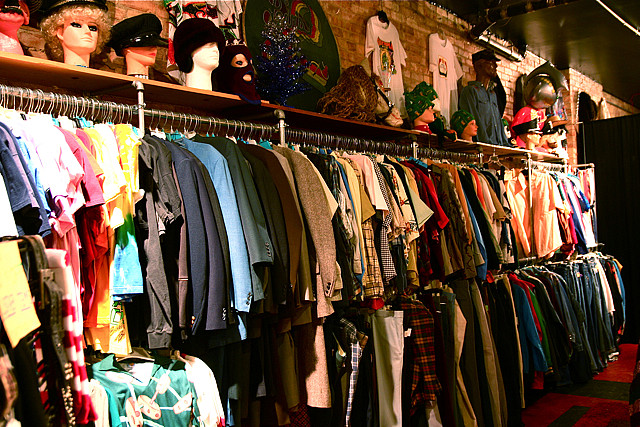 Take a look, you just might find something special

“Vintage” has become a word loaded with associations. In terms of clothes, it implies a plethora of different styles and fashions. It can mean anything from “hipster”, with rolled-up sleeves on check shirts, 80s skin-tight jeans and shaved sides of the head, to the 50s housewife look, with polka dots and flared skirts and oversized headscarves. It’s wormed its way into all areas of fashion, allowing shops like Durham’s quirky little haven Ding Dong Vintage to flourish. It may not yet be a mainstream trend, but it’s surprising how many otherwise conventional people turn out to own a “vintage” piece when you have a nosey in their wardrobe – often in the form of an article of antique jewellery inherited from a grandparent, or a hand-me-down from a parent’s wild teen years, or even just a favourite cardigan from when they were twelve, liberated once more from the back of a drawer.

Of course, “vintage” actually just means “old” – anything reclaimed from a former time period. But it has come to mean so much more than that. Describing an item as “vintage” adds a special mystical air of superiority to an object, placing it higher in the hierarchy of fashion value than something that is “retro” or “replica” or “faux vintage”. Fashion elitists will often turn their noses up at brand new pieces that aspire to the appearance of authenticity. But is this attitude harmless or something with which to condemn fashionistas for their style snobbery? Or is it, in fact, something with the potential to make a positive difference in the world? One thing is certain; it’s much more than just a passing trend, so perhaps it’s time we examined some of the wider implications, in case it continues growing in popularity.

Firstly, there is the issue of environmental sustainability. This phrase often elicits a yawn, but it is something people are becoming increasingly aware of. Quite a few clothing giants are jumping on the bandwagon of eco-friendly fashion. H&M, for instance, have just launched a new line called “Conscious,” which uses sustainable materials, such as organic cotton, hemp and recycled polyester. However, it has also been noted that this is part of a wider introduction of more expensive ranges into their shops, as the company expands into other markets. Obviously, “eco-friendly” in the fashion world is still very niche – understandably so, perhaps. It is so easy to ignore the pangs of your conscience when faced with a pretty dress and a steadily increasing overdraft. This all applies to “ethically-sourced” fashion as well. Clothes made of Fairtrade cotton, and put together by people on a fair wage outside of Asian sweatshops, are few and far between. And of course, they are more expensive. Often a lot more. Making it very difficult for ethically-minded fashionistas to make any inroads into the mainstream world of consumer clothing. And then there is always the now stale debate about fur and whether or not it can ever be ethical.

But, clearly none of this applies to vintage clothing. Whatever the origin of the clothing, when you pay for a vintage garment, you’re paying the shopkeeper and no-one else. Which means that all these issues are neatly by-passed. Just the fact that you are re-using a product makes it more environmentally sustainable, as there are no raw materials being used up at all. Of course, if vintage fashion were to dominate the entire market, this would have a detrimental impact on manufacturing, but that is an extreme situation. With our lust for buying new and shiny things in today’s world, this situation is the proverbial whelk in a supernova.

It is also interesting to look at the impact of the growth of vintage style on charity shops. Having worked in one for many years as a teenager, I can confirm that they trawl through a massive amount of rubbish before extracting anything even vaguely saleable – just a few of the things I’ve seen in donation bags include buttonless shirts, torn raincoats, holey wellies, mankinis, suspiciously stained underwear and something made of PVC and covered in tassles that I wish I could forget. So, when you do find something intact and PG-rated, you put it on the shelves regardless of whether or not it is up-to-date with current modes. But occasionally, you realize that you’ve found a real gem. An original 60s dress, a piece of real gold jewellery jumbled in with strings of tacky fake pearls, a pair of spotless converse that are clearly decades old. Surely the rise in vintage fashion can only mean good things for charity shops, as they can then charge higher amounts for these authentic items?

Unfortunately, this is not entirely so. For one thing, they are less likely to receive these items in the first place, as people become more aware of their value and so often choose to sell them on ebay instead of just dumping them in with the other leftovers and carting them off to a charity shop. And for another thing, it is still often difficult for charity shops to shift authentic pieces at higher prices, as shops specializing in specifically vintage clothing have sprung up all over the place, and are often fairly reasonably-priced (though of course, anything with a designer label is likely to fetch buckets of cash regardless of where it is sold). Why bother rummaging through stale underarms at your local Oxfam or Marie Curie, when you can let someone else scavenge the best bits, and then put them all neatly into one shop, ready for your perusal?

So, when it comes to the world of second-hand style, perhaps the ethics are a little more complicated than they first appear. But, in the end, it’s still far better to buy vintage items than new ones – environmentally friendly and socially ethical. Nonetheless, next time you fancy a quick bit of retail therapy in a time-warp, consider going the extra mile and having a rummage in a charity shop – and have sympathy for the people sorting through the stray bras and stained baby clothes to find you the best bits.