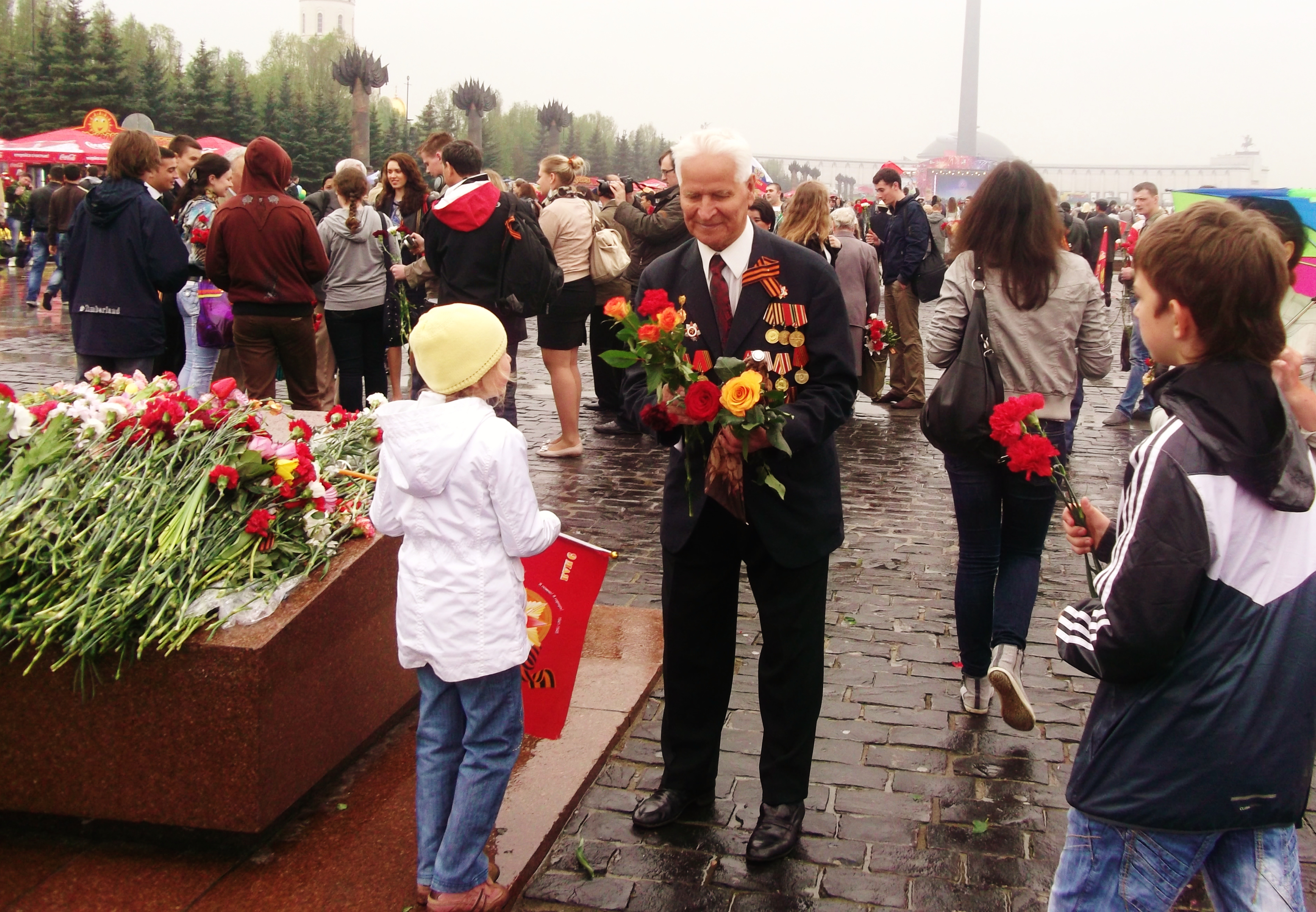 Muscovites pay tribute to the war heroes of the past.

Over the past few weeks, red and orange flags and banners have been hung from every building in Moscow, traffic in the city centre has been diverted to allow for rehearsals of military processions and children have started arriving to class humming soviet war tunes and dressed in military hats. It can only mean one thing – the 9th May has arrived and Russia is celebrating its 67th annual Victory Day (Den’ Pobedy).

The national holiday was first celebrated to commemorate the end of the Great Patriotic War and the sacrifice of the millions of soldiers and civilians who lost their lives. The present day festivities have, however, come to transcend the Great Patriotic War and stand as testament to all of Russia’s victories which, according to an Orthodox Church Elder speaking to the crowds at Victory Park, include victory over the Poles in the early 17th Century, victory over Napoleon in 1812 and ‘victory’ in the First World War (the latter being somewhat questionable on account of the Eastern Front actually collapsing in March 1918 when the Bolsheviks signed the Treaty of Brest-Litovsk. But we’ll let them have their moment). Billboards around the capital proclaim Victory Day as a festival of remembrance; a day to give thanks to the veterans who fought; a day for Russians to congratulate themselves on just how great their country really is. And, my, do they know how to celebrate.

The day kicked off with the culmination of all those road closures and rehearsals, the military procession through the streets of Moscow. Crowds braved the drizzle to line the streets and wave flags as tank, followed by armoured car, nudged along by what may well have been warhead- bearing transformers, rolled past in a sea of exhaust fumes and jubilant cheering. Parks and squares all over Moscow played host to open air concerts and impromptu folk performances, including a truly magical orchestral performance of pieces by Rachmaninoff, Shostakovich and Tchaikovskii, conducted by the celebrated director of the Marinsky Theatre, Valery Gergiev. As per tradition, the festivities were concluded with monumental firework displays at fourteen points all over the city. I watched from the Sparrow Hills as fireworks lit up the sky over the Moskva River, a simultaneous sister display from one of the other venues visible some miles off. As far as the eye could see people were embracing, making toasts, chanting ‘Den’ Pobedy’ and singing Victory Songs. The experience was truly incredible.

Before last Thursday I had never experienced Victory Day, only studied it from the perspective of its highly nationalistic overtones and role as the lynchpin of the sinister ‘cult’ of the Great Patriotic War. I was dubious, expecting to feel only disdain for the celebrations. But it wasn’t like that at all. Of course, as with all things in Russia, some aspects were a tad over the top; however, as I stood watching old veterans, adorned with their military medals and surrounded by generations of their family, receiving flowers and personal thanks from strangers, I felt only genuine emotion. Russia’s loss in the Great Patriotic War was immense; Victory Day, bringing an otherwise divided society together in a show of solidarity to celebrate its shared past, has been the only way to cope with the horror and grief of such loss without submitting to despair. Yes, it’s rhetoric is full of embellishments on the truth and, at times, outright lies; yes, it is quite clearly a tool of state propaganda; and yes, it is most likely responsible for some of the worryingly misinformed takes on history that Russians have habit of voicing. However, in spite of this, I would never condemn the Russian people for partaking of the celebrations. Victory Day unites them, it makes then thankful and humble and has helped them through one of the darkest periods in modern history. Russia needs Victory Day, so long may it continue.