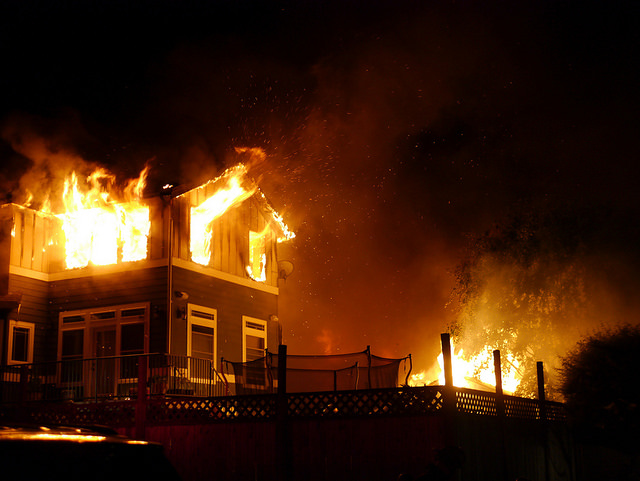 A neighbour whose house is on fire or has burned down.

The moment I saw this word I knew I was going to write something on it. How can one resist? Everyone has the right to know that there is a word that means “a neighbour whose house is on fire or has burned down”.

For context: Ucalegon was one of the Elders of Troy, and the burning of his house is narrated in the Aeneid. It’s a dated term so it’s not used very often – but still, it’d be a waste not to point this out.

Not that I think that this term is particularly easy to use in real life. If you asked me whether I could use it in a sentence, I’m afraid I couldn’t. I assume that most people wouldn’t want their neighbour’s house to burn down, unless they had some unkind, rankling hatred towards their neighbour and wanted something terrible to happen to them. Also, there’s something slightly unfeeling in the fact that we have a word for this. When I found this word I was amused by it, but as I started thinking about it more it gradually became bemusing rather than staying amusing. I still think it’s funny. But why would you think that you would need a word like that? Are neighbours’ houses burning down a common occurrence? Did they just want to make fun of Ucalegon? Did one think that making a word out of it would convey his pain more efficiently?

It’s particularly true when it comes to words that describe the grievances of other people. Putting these events into words is inevitable, as people need to know about the things that happen around the world – every shooting, every assault, every natural disaster. But the problem is that it can get to a point in which we start to feel numb.

So there was another shooting.

There was another case of sexual assault.

There was another earthquake.

Sometimes plain facts don’t do much to convey the absolute monstrosity of situations. You can see a detailed report about a grotesque event; it’ll make you squeamish, it’ll make you angry, it’ll make you upset – but then, at the end of the day, after you finish that report, you’ll be done. Maybe you’ll think about it after you read it, but very rarely will that report turn you into a changed person. At least, that’s what people like Theodor Adorno and Muriel Spark thought. They were of the opinion that writers had to do more than state mere facts; they needed to employ methods that would jolt their readers out of their comfortable status quos. This doesn’t just apply to fiction writers, though. There’s this certain numbness that comes with reading about various atrocities that happen, especially now when we can see so many of those horrors on a regular basis.

Maybe that’s why there are words like this. They make you laugh at first – who would’ve ever thought there was a need for a word like this? Then they make you think. Maybe it shouldn’t be consider that funny. Maybe there are more sinister undertones. Maybe it shows a different side of people, a side that shows that we can get too interested in having a name for everything, as if we need to explain things away.