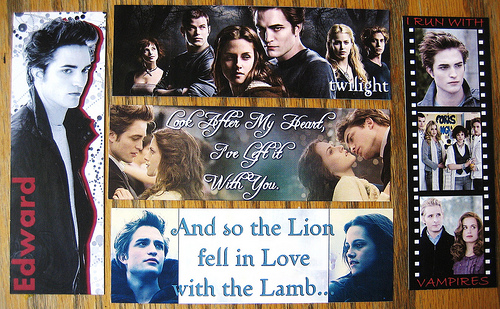 Of course it’s not a cult…

Out of curiosity, damaging my already fragile Y chromosome, I have now seen all three Twilight films. However, this is not a film review about Twilight, but a look at the hype surrounding the saga and the absolutely bizarre things that have come out of it. I wanted to like Twilight; I really did, partly so that I could write a happy article. Yet I just don’t understand the attraction of a 109-year-old overprotective stalker who hasn’t lost his virginity in a hundred years. In comparison, Susan Boyle is 49. When fanatics imagine paradise to be full of virgins, I can’t see them thinking that these two would be there. Just saying. Nevertheless, here are my thoughts on the Twilight universe.

The only other notable example I can think of where literature has created such mass hysteria is Harry Potter; I don’t know whether there will be a Twilight theme park anytime soon, though, maybe with a rollercoaster that delves into Edward’s underwear or something. For a novel that isn’t amazingly original or extremely well written, the audience that Twilight has picked up has been impressive. My mother, who has her own private library in the garage that rivals the British Library, informs me this type of romantic sci-fi content isn’t new. Supernatural or forbidden love isn’t new territory, and the second book is extremely similar to Romeo and Juliet – except the choice is between bestiality and necrophilia. I find it odd that, with our supposedly sex-obsessed generation (I find it disturbing to say the least that some clothing for ten-year-olds has become sexualised, with padded bras sewn in), a story essentially about abstinence and purity, with supernatural beings thrown in, has become such a success. Especially considering the fact that I’ve talked to women who said they liked the story, despite it being badly written.

The books were extremely popular, but like Harry Potter, it was the transition to film that expanded the franchise massively. When I saw the first film, it actually wasn’t as bad as I expected. Don’t get me wrong, it wasn’t good either, but it still made me want to see the second instalment – which, by the way, was one of the worst films I have ever seen. Sorry ladies, but if you had a cut on your forehead, I wouldn’t sanitise it with my sweaty t-shirt.

Another fun game is counting how many times Kristen Stewart bites her lip to show she’s feeling an emotion. Despite the terrible acting and characterisation, I can see the appeal of the story. I thought it was ridiculous, but I can see how the romance and angst in the films would appeal to pre-teen women – so much so that they are willing to spend money on the merchandise.

A hyped-up franchise like Twilight brings many people out of the woodwork trying to cash in on it. One of these misguided majestic products that I present to you is the Manllow. This simply has to be seen to be believed. Its target audience is clearly lonely and desperate teenage girls, as this product is half pillow, half man. Not only that, it comes with Robert Pattinson’s face badly drawn on it. I was so excited by this discovery that I showed my friends who love Twilight. Surprisingly, these brain-dead harpies, rather than joining me in mocking it, actually understood why there was a market for it, and some considered buying it. Needless to say, this worrying revelation led me to cut my friendship ties with them. However, the Manllow is not the creepiest product I have seen.

The worst is not the Edward Cullen shower curtain, or an OCD t-shirt (“Obsessed Cullen Disorder”), but Twilight underwear. Yes, you can buy underwear with Edward Cullen’s face on it. Not only that, but his face is on the inside of the underwear too, right by your (cough) private special area. I let very few people have their face that close to my genitalia, and I find it a bit creepy that people might want Mr Cullen with them at all hours of the day.

People may disagree over whether they like Twilight, or if it is good or not, but what can’t be challenged is the success the franchise has had. Especially remarkable considering that it’s unoriginal and badly written. Then again, apparently Shakespeare stole lots of his material too. It worries me deeply that there is a market for this merchandise, but kudos must be given to Stephanie Meyer and her publicist for what is undoubtedly a success story in this worldwide phenomenon. For that, I think everybody is a little jealous.