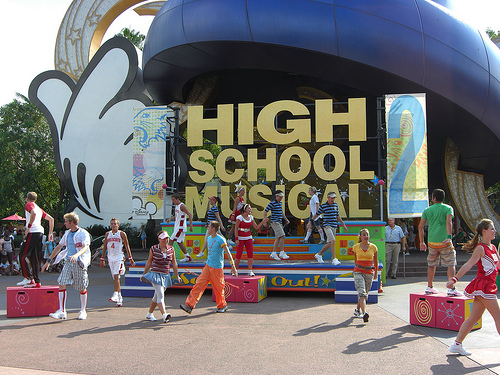 In everyday life this would be amazing… right?

This is a rare situation to find myself in, but I am torn in my opinion of Glee and High School Musical. As a male approaching the end of my teenage years, I feel like I should hate both of these shows as equally as I hate people that wear trousers with a belt below their waists so everyone can see their Primark boxers. However, I can see the appeal and, hatefully, find myself enjoying both of them at points. But not all the time, it must be stressed – there still is a remnant of that Y chromosome in me somewhere…

On paper, I should despise both of these shows. Both contain cheesy scripts, worryingly good-looking people that are so talented that they need be bullied by law, and a predominately female fan base. One of my friends even used High School Musical to prevent me from scoring with women on multiple occasions; he would suddenly appear whilst I was attempting to chat up someone, singing and dancing along to the music playing out of his phone/iPod/laptop and encouraging me to do so too as I “loved” it. It was the ultimate cock-block.

High School Musical was the forerunner to Glee, and arguably started the revolution. I find it a lot easier to hate High School Musical though, which is obviously a good thing as it makes me feel manlier. I am in the unfortunate position of having a younger sister, one who has an extremely good memory, and so have been subjected to her repeated interpretations of the songs enough times that if I hear them, the red mist descends. For legal reasons I cannot say what then follows, but you get the picture. However, I do admire the cast in High School Musical; kudos to them, as they can actually sing and dance at the same time, and well. The only time I can bring myself to do both those things is when I’m so hammered in Klute that people leave space around me to dance, not out of awe but out of fear. Critics of HSM don’t give enough credit to the cast, but frankly that isn’t enough to stop me hating these films, as my sister will still sing incessantly. The songs that the cast sing are the reasons why Islamic fundamentalists hate Western music… if only they had listened to Eye of the Tiger instead.

I saw the first series of Glee partly to see what the fuss was all about, but predominately so that I could take the piss out of my friends who liked it. Shockingly, I actually enjoyed it. Sure, it had the most ridiculously diverse cast possible, which had every single group imaginable represented, but most of them were actually funny. I have laughed out loud whilst watching Glee, but am ashamed to have done so. You see, Glee is obviously marketed towards women – teenage women, I might add, so I don’t like to admit that I enjoy it (although ironically I am writing about it in this very public article). However, the storylines, although ridiculous, are usually quite funny, especially the subplot of how “Sue ‘C’s it”. Celebrity fans of this include Emma Watson, who has copied Sue’s hairstyle. At least, that’s the only reason I can think of for her cutting her luscious, beautiful, radiant locks off… Why Emma… why?

Glee is better than High School Musical, simply because it is more fun. Both are in a similar genre, but HSM is infuriating because even though the cast is talented, you want to beat them all senseless with their own perfect smiles and teeth. This is also exacerbated because of the young fan-base incessantly repeating the songs, which doesn’t happen with the horrendously named “Gleeks” (fans of Glee – seriously, that’s the name they chose for themselves), as the songs sung by Glee are covers. It’s also funnier, so at least you can laugh whilst you are wallowing in your own shame.

I will leave you with this final thought. Yes, the casting in both is ridiculous, yes the script is predictable and cheesy in both, and yes the fans of each make you doubt humanity – but how great would it be if everyone spontaneously broke into song and danced? Imagine it, you are in the lunch hall having a somewhat bad day after not getting onto the cheerleading squad (sidenote: why do the cheerleaders always wear their kit? Do they wash it everyday/never wash/have multiple kits? The filthy girls…) – and then the entire school spontaneously breaks into song and dance because some randomer likes a girl and can’t confess his feelings in normal speech, so must perform it. Everybody dancing on the tables, synchronised, singing in time with the man who can’t do what everybody else does: get hammered, and confess in a noisy club whilst trying not to vomit on them. Wouldn’t that be fun and awesome?

No, I hear you cry. It would be weird. Well, I still think it’s cool…