Trust me, I’m the Editor 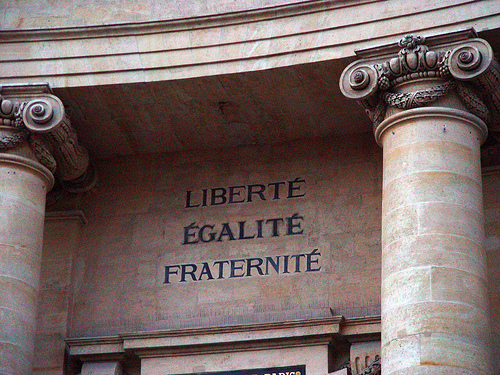 Now, everybody – welcome to the first of our editorials, a new weekly feature of the website. Can we hope these are going to be more than an occasion for the General Editors to go on about whatever they want? I doubt it, but I hope you’ll want to find out as much as we do. The theme today is… France! I’m going to say a few things about what we’re up to this term and then suddenly and unpredictably start sharing my thoughts about an issue I’ve been feeling strongly about: the persecution of the French Roma last summer (2010).

Being very French myself, I’m very pleased to see how much France-related content we’ve had – predictably they concern , – we even have an ongoing series of rather personal articles on what it’s like living in France (start ). And while I don’t think I’m Afghani, I’m delighted to announce that we are going to be setting up an “Afghan Appeal” section very shortly, which will generate content about the country and support and promote this charity’s upcoming events in Durham. We hope to do this with a different charity each term. We are also starting a kind of Creative Blog which will have stories in instalments, cartoons and other such creative things. Do write to editors@thebubble.org.uk if you want to contribute or even apply to run this section or the Politics one; we need editors for both.

I’d go as far as saying that racism is institutionalized in Britain, and that, in a flawed world, this is a good thing. By “racism”, I mean thinking in terms of race, a taboo back home in France where the fiction that your colour of skin and background bears no relevance is devoutly maintained by my (ethnically white) compatriots. As anyone with a North African background living in France will tell you, it does make a big difference. Nevertheless “liberté, égalité, fraternité” is a powerful illusion I myself adhere to; that’s how it should be and I am very lucky to have been brought up wary of judging people on their background. But that’s certainly not how it is, and I sometimes feel that it’s good that the UK institutions can gather data on people’s ethnicity to help solve such problems, something which is illegal in France.

Myself, I still decline to share such information, and I think most of my countrymen would be as surprised as I was when Durham University wanted to know whether I was African Irish or some other delightful combination. Which is why when the government launched its offensive against the Roma (“the illegal camps are hotbeds of crime…”), French nationals or not, in July – August 2010, everyone was shocked that employees of the republic had been told to target Romas specifically. However, it quickly became obvious this could turn out to be quite a cunning move for the unpopular Sarkozy government. The Roma are a very small and rather isolated minority in France and have a really bad reputation; as I said, there is a lot of racism in France we won’t admit to. It looked like one of the key government ministers had given large tax breaks to one of the richest people in France. Following a recurring pattern, the media suddenly got distracted by something else.

An aside: maybe the Interior Minister Brice Hortefeux (the equivalent of the British Home Secretary) thought August was a good month to crack down on Roma criminality. France famously stops during the summer, so it’s unlikely anyone would pay much attention; anyway, no one ever seemed to care about the popular racism and police harassment the Roma suffer from. I’d like to think this government minister might have been nervous to redeem himself after being found guilty of making racist insults in public. I should have known better; recently, the French minister of Foreign Affairs Michelle Alliot-Marie didn’t resign after having offered the Tunisian government French police expertise on how to take on the demonstrators. These people have no shame.

Never mind the dodgy ministers and friends, the more I hear about what Sarkozy is up to, the more I like him. I respect his ability to figure out what is wrong with France and his desire do to something about it. Indeed, we’ve all seen the Roma begging in the streets or the metro, often with sedated-looking children. I’ll watch out for my wallet rather than parting with a euro. In the country, they walk past houses slowly until they notice someone in the garden. And for most French people, this is not hearsay but first- or second-hand experience. So when all the holidaying leftists heard some people were shocked the police’s racism was once again made so nakedly visible and started pretending they really cared, I felt more sick with them and closer to the president than ever before. But I disagree with everything he does.

French “égalité” and “liberté” seem to apply only to those who are the same as us: that’s what “fraternité” means. We have the idea of tolerating what is different but have considerable difficulty living up to that. It might be worth pausing for a minute and thinking that maybe the reason why so many Roma turn to crime and confrontation with the police is because they have little opportunity. But this is not something we do, for even the most liberal of us (a category in which I include myself) have an inbuilt bias against the Roma. After all, I had never heard of a Roma having a job till I read up on the topic and heard of successful Roma working in fairs or as masons. And yet the appalling crime rate within that community, like that of the Native Americans in the States, only shows how disfranchised they are. Call me naive, but I am very sceptical that the Roma are born thieves and beggars. Sarkozy’s solution is to break the vicious circle through exclusion.

Few people in France remember that the last time Romas were targeted because of their ethnicity was when they’d be shipped off to Germany to be gassed, unless they could be worked to death beforehand. Blessedly, Sarkozy favours flying those who aren’t French nationals to Bulgaria and Romania and further marginalizing those who are, but he too stands for a politics of exclusion. Maybe a better solution would be to give opportunities to those who have little. It would be nice if that was what France stood for, as – like Britain and the US – it sometimes does. France held true to fraternité and was shocked, Sarkozy was only further discredited. But then if my house had been burgled recently and 300 Romas were living in a field next to my house I might not feel that way?