Trump-Russia-Brexit: Lessons from a Talk by John Sweeney

I could not understand how so many buildings could all have the same number. 147 Bergheimer Straße was, according to the posters, to be the venue for the Heidelberg Intercultural Centre talk given by the BBC investigative journalist John Sweeney, titled TrumpRussiaBrexit. It was only after a tour of many adjacent ex-industrial buildings all numbered 147 that I made it to the venue. Sweeney’s journalism has always been intriguing. Whether going inside the cult of Scientology, getting into a death-stare with Vladimir Putin whilst posing as a professor of mammoth-ology in eastern Russia or gaining undercover access to North Korea, there have been many occasions when I have listened to the Panorama theme has been followed his dulcet tones.

The title of the talk pretty much gave away the editorial bent. Yet in a world of political polarisation, hearing views one may not wholeheartedly agree with may help one to re-think or even just clarify one’s views. Here’s what I took away from the event: 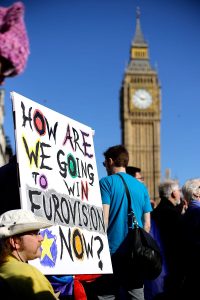 Sweeney arrived at the link of Brexit with Russia and Trump via Nigel Farage, who describes Putin as a man who believes in nation-state democracy and gave a quasi-endorsement of Donald Trump. Yet glancing over the opinion polls leading up to the EU referendum shows that support for leaving was highest when support for UKIP as a party was lowest, which makes this a bit of a misconception among people with Mr Sweeney’s Weltanschauung.

Die-hard Corbynistas would baulk at the idea of their messiah sharing traits with the US President, but there are many uncanny parallels. Trump attacks leading media organisations as fake news, gets endorsements from questionable news sources and tweets a video of himself wrestling CNN to the ground. Meanwhile Corbynistas use ‘fake news’ to describe such things as their party’s problem with anti-Semitism, get support from alternative sites such as Skwawkbox and prompted the BBC to hire security in order for political editor Laura Kuenssberg to attend the party conference. Both have built strategies based on appealing to those who don’t usually vote and exploiting perceptions of hard times, despite living standards improving by objective standards under the Obama presidency and Cameron and May premierships. And that is before we get to the parallels of personality cults and some supporters’ casual sexism towards female opponents.

The 2017 election would likely have pleased Putin

Over the past two years, senior Labour Party figures have appeared forty times on Russia Today, the channel where former SNP leader and First Minister of Scotland Alex Salmond now has a show; it seems the British left is in cahoots with Russia, although Mr Sweeney was focussing more on the right. A strong British government delivering a Brexit deal which ensured cooperation with Europe could continue is not in Putin’s interests, so one could guess a hung parliament would be pleasing to him.

The British broadcast media is in an uncomfortable position

Throughout the talk Mr Sweeney was careful to add the caveat that he was expressing personal views, not those of the BBC. During the wine-fuelled discussion afterwards, in which he gave his frank political views, including how he had voted in the past, he was keen to ensure he was not being filmed. This is because our broadcast media is in an awkward middle. If it were perfectly impartial, nobody would have a problem with journalists having their own opinions. If we allowed the broadcast media to be partisan, we could allow each broadcaster to cater to a different strand of opinion. Yet the pretence at complete objectivity means Mr Sweeney was uncomfortable having his personal views recorded. Think about the words ‘despite Brexit’ added to stories of positive economic news, for example: combining an objective statistic with an unsubstantiated view of our leaving the EU.

That said, Sweeney recounting the way three of his journalistic contacts had been murdered, in one case in sight of the Kremlin, is a reminder our free press is not to be taken for granted.

On Democracy and Stability

In response to Nigel Farage, Sweeney had asked ‘Is Russia a democracy?’, and had pointed out that anti-EU voices can be heard in the European Parliament. Yet pro-EU factions always close ranks, crossing other political boundaries to prevent any major change in course. The same is true in Germany, where it is seen as imperative to prevent the Alternative für Deutschland and The Left from controlling any levers of power. What Sweeney heralded as stability means maintaining a broad and distant centrist consensus to the exclusion of democratic shifts. It appears that now Angela Merkel, whom Sweeney was naive to laud as strong and stable given that German coalition talks had fallen through, will once again have to do a deal with the SPD in a process over which German voters will have had no control. This is why we should appreciate the British system of having more direct control over our Government.

Where was the empathy?

The audience was broadly centrist, liberal and internationalist in outlook. Every question they asked about Trump, Brexit, or the AfD seemed to rest on the problems of democracy, the problem of allowing people too much of a say and blaming the media. Surely it would be better to focus on how mainstream politicians could better answer the legitimate concerns of voters, rather than provide them with no alternative?

In 2015, Sweeney had made a film for Newsnight in which he searched for a young boy who had been wrongly taken by his uncle out of hospital in Belgrade whilst on the refugee trail. Seeing the child safe and happy, one could hardly deny him the security of being in Europe, yet there must be measures in place to hold those who do not follow the right procedures, such as his uncle or those camping in Calais, to account and not give them a free pass.

And that’s what you can pick up from just one evening.