The Story of the Mexican Mariachi 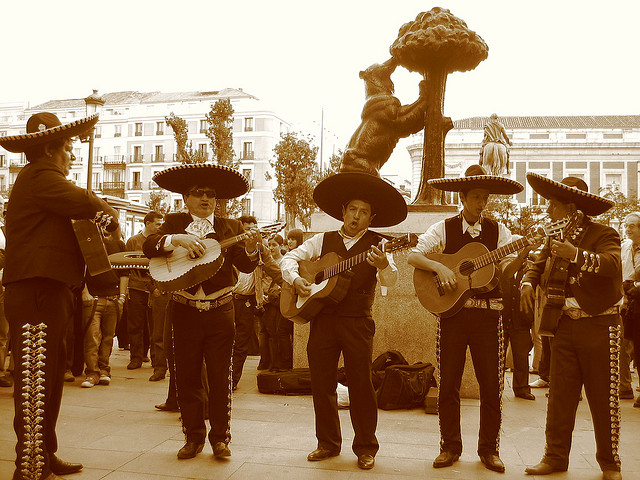 A merry band of Mariachis

Mariachis are a bit like Mexican cowboy bands, with trumpets and charro outfits; they traditionally represent a macho type of man. Last weekend I went for a night out in Plaza Garibaldi, Mexico’s centre for these musicians in downtown Mexico City. Before I had even plonked my backside in a chair, me and my pals were approached by a man with a car battery and we were asked if we would like to “test ourselves”, all of us holding hands in a circle while two people held on to metal rods sticking out of the battery. As the volts got cranked up and hands began to sweat, I wondered if it was such a good idea and was very relieved when one the lads got an electric shock, went flying off his chair on to the ground, shouting one or two rather tasty expletives. We laughed but underneath it all, were a little horrified at our stupidity.

Anyway, back to mariachis. The newly renovated Plaza Garibaldi is filled with them, searching for people celebrating weddings, baptisms, birthdays and other parties, plying their trade. Among the museum to mariachis and tequila, thousands of mariachis circulate haggling over prices for music per hour. A celebration becomes all that more special when the mariachis turn up.

With the arrival of Hernán Cortés and the conquistadores from Spain, many Spanish traditions were brought across to the “New World” including the typical theatrical orchestra of violins, harps and guitars. The sounds of these instruments combined is what makes mariachi music unique. Legend says this type of music comes from Cocula in the state of Jalisco, the first examples of mariachis in print appearing in the 1880s. During the Mexican revolution, the mariachis who had worked in haciendas (large land holdings) were forced out and wandered from town to town taking their songs of revolutionary heroes from one place to another.

In the 1930s, mariachis changed from their traditional peasant wear to the outfit of the charro, a figure similar to ranchers and cowboys, however differing in culture and etiquette. Some sources suggest that it was the dictator, Porfirio Díaz, who ordered this change for a special presentation for the visiting United States Secretary of State and mariachis were also used during the celebration of Mexican independence. Since then, mariachis have become ever present in Mexican culture with the great Mexican entertainers Jorge Negrete and Pedro Infante taking to the style as well as the greats such as the Mariachi Vargas group who have been playing for over 100 years. 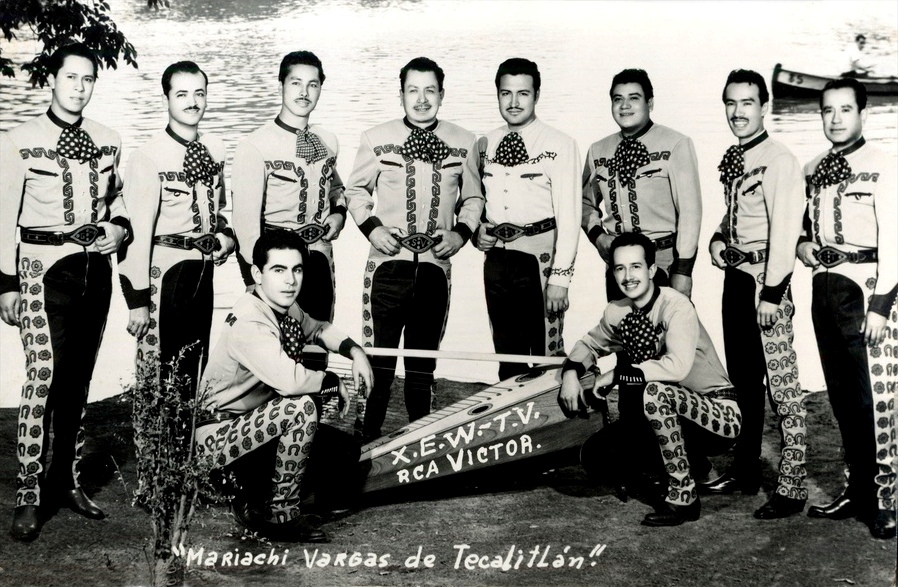 The mariachis of today play songs of love, politics, machismo, betrayal and even animals; the most famous being perhaps “The Cucaracha”. Their cultural history is the sum of the cultural revolution which has taken place in Mexico over the past hundreds of years and with the advent of television and radio, their appeal continued to grow, so much so that Mexico now hosts an annual international mariachi conference which has hosted groups from Mexico, Latin America, Egypt and Sweden among many others.

Regarding their style of music, Higgins in his 1991 book, The Meeting of Two Cultures, says that:

“the Mariachi uses sharply contrasting sounds: the sweet sounds of the violins against the brilliance of the trumpets, and the deep sound of the guitarró against the crisp, high voice of the vihuela; and the frequent shifting between syncopation and on-beat rhythm. The resulting sound is the heart and soul of Mexico.”

While on our mariachi investigation trip/bar crawl, I was interested to see what clothes these musicians wear. Their outfit is very distinctive and consists of a waist-length jacket and tightly fitted trousers which open slightly at the ankle to fit over a short riding boot. They are covered with embroidery with silver buttons. You couldn’t miss a mariachi from a mile away! (Unless you had forgotten your glasses). 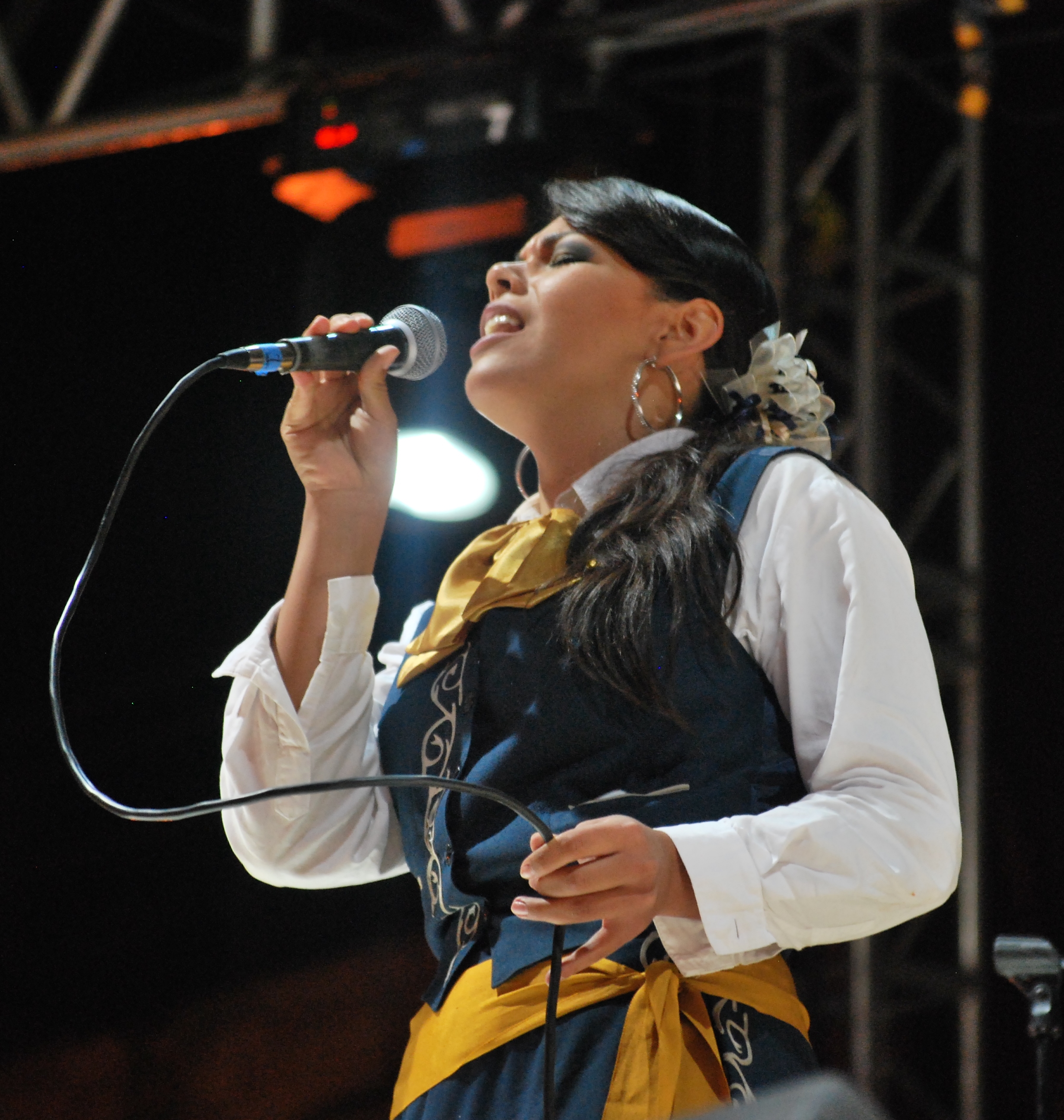 As our night wore on and more tequila was drunk, I remembered the existence of female mariachis and looked for them among the plaza. However, on this occasion, none were to be found. Having said that, female mariachis are becoming more common. One example is Juanita Ulloa, a US star blending operatic and mariachi styles who even sung at the opening of the LA Olympics!

Today, mariachi music is played around the world from the USA to the farthest reaches of Asia. From the heart of mariachi music in Mexico, while nursing this hangover, I shall raise a glass of water to the future of mariachis and their continued success. Perhaps over the weekend, I’ll be ready to drink a tequila in their name.