The Sport of Kings (and Queens) 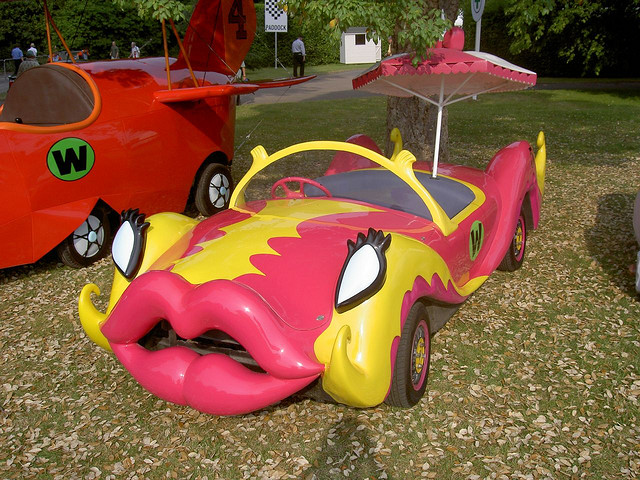 A suitable ‘vessel’ for the Queen…?

Dictators are such a wonderful topic, espousing as they do the good old-fashioned values of tyranny, suppression and fear. They are also a mine of peculiar stories and fascinating trivia. But I think it is perhaps fitting that, with the passing of one of the most famous dictators of modern times, we spend a few moments to reflect upon the “Eternal” – well, clearly that wasn’t right – and “Great Politician”, Kim Jong-il.

Since his passing, the nation of North Korea has been swept with great and surprising mass hysteria as individuals strive to outdo each other in expressing their grief at the demise of their benevolent leader who happily slid down his waterslide while the people starved. It is now understood that the body is to be embalmed with a view to having it kept on display (much in the manner of his father). It should be noted that he is not the first leader to have this rather macabre right performed on his corpse. Most famously, the mortal remains of Lenin are on display in Moscow and once, nearby, also resided Stalin as well (until the Russian people finally overcame their fear of him and removed it from view). Such, it seems, is the popularity amongst tyrants for mummification, that a specialist company exists (in Russia) to cater specifically to the needs of dead dictators. Indeed, it was unfortunate that at the time of Kim Jong-il’s death his father was at the menders, having his features touched up to prevent onset of decay.

But on what to focus now that the seemingly infinite well of dictator-based stories is denuded of its greatest spring? The answer, at least for this article, can be found much closer to home and in a figure whose ancestors are associated frequently with a great deal of their own brand of peculiarly English tyranny (there goes my meagre chance of a peerage). This coming year, as we prepare for and put on what I’m sure will be fantastic Olympic Games (my attempt at wangling free tickets), the country will also be celebrating Her Majesty’s Diamond Jubilee. And, thanks to the magnificently piscine Secretary of State for Education (also known as the Rt. Hon. Michael Gove MP), she is due to be given a rather generous gift by the nation… her own boat.

Of course, the gift isn’t quite as I’ve described, and it is still merely a suggestion. I for one rather fail to see the point; after all, the Queen is already in possession of a rather impressive array of warships and submarines. Moreover, what could an 86-year-old woman possibly want with a 400m racing yacht… unless she’s taken up water-skiing?

But, while this is indeed a very generous gift, there have been some who have questioned whether it is really the time to give such an expensive present (estimated at approximately £60 million) in a time of austerity. Others have also wondered quite why this suggestion came from Michael Gove, a minister who should surely be slightly more focused on the nation’s schools than gifts for the Queen. Perhaps he is hoping that he will be rewarded by a grateful monarch with a knighthood, or perhaps even a peerage?

There are those who are entirely against any form of gift at all, those who believe the Royal Family to be an antiquated and draconian group of ineffectual buffoons – and in some cases they might even be right. But my eye was caught by a suggestion from Libby Purves in The Times that maybe even if we don’t bestow this particular gift on the Queen, we should in fact have a national vessel anyway (not including our plethora of military and merchant vessels). This idea is hardly new as many other nations (including Norway and Argentina) have national vessels with the sole purpose of promoting their heritage and culture across the globe. In addition, these vessels provide young men and women with the opportunity of a lifetime in travel.

Personally, I am all in favour of a new vessel, but perhaps for a slightly different reason to Michael Gove. My idea would allow her gift to be shown off in front of the whole world, without even needing to leave our own waters: Royal Yacht Racing.

At the starting line, the monarchs of Europe would arrange themselves. Rulers of Spain, Denmark, the Netherlands, Belgium, Norway, Sweden and a host of smaller nations would race against our Queen around a pre-defined course in a contest that I think would become increasingly like Wacky Races. Obviously, our own monarch could never descend to cheating, but can we say the same for the others? Her Majesty (perhaps dressed as Penelope Pitstop) would probably take an early lead, but in her wake there would be an increasingly violent struggle. Prince Albert of Monaco, I fear, would behave like Dick Dastardly and launch torpedoes that serve to scupper the hopes of several other royals (perhaps with the Grand Duke of Luxembourg as his side-kick, Mutley). But then the Ant Hill Mob (or rather a host of smaller heads of state) would put paid to his hopes in their own way, allowing the resurgence of other competitors. Perhaps inevitably this scenario would get out of hand with defeated monarchs calling on the aid of their respective navies and armed forces, turning the highlight of the Olympics into a diplomatic disaster. But then, that wouldn’t be the first time that the Olympics becomes a political event…