The Spanish: Blind to Defeat? 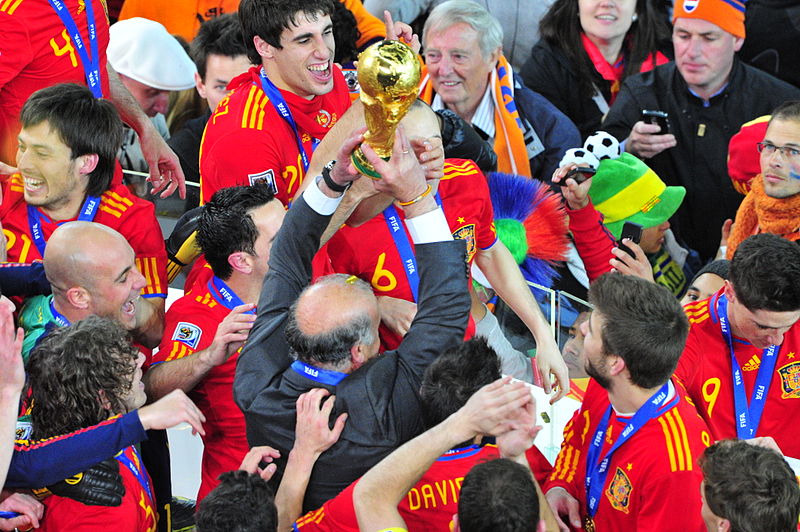 Can you imagine England doing this?

In case you didn’t know, the Spanish are very, very good at sport. They also take it very, very seriously. Here’s a tip: when talking to a Spaniard about sport, make sure you are aware of, and acknowledge, every single aspect of their current sporting prowess. I didn’t, and it was disrespectful of me.

The conversation occurred in the early stages of my time here. I noted to a madrileño that Spain are World and European football champions, European basketball champions and are on route to Davis Cup glory with Rafa Nadal who could become one of the greatest tennis players of all time. I also threw in that arguably the best road cyclist of recent years, Alberto Contador, is Spanish. Satisfied with my flattery, I didn’t expect him to immediately remind me of Fernando Alonso, Jorge Lorenzo, Carlos Checa and Handball, as if my failure to complete the list was a personal and national affront. I nodded almost apologetically. The Spanish are intensely proud of their sporting success. They want, and need, everybody to know it.

I have come across this attitude several times now and it has always struck me how much support sports stars receive from their adoring nation. It is a cultural attitude far removed from the United Kingdom where we scrutinise our athletes and always expectantly focus on how good we should be rather than appreciating how good we are.

Of course, its a great deal easier being in Spain’s shoes, but it begs the question: is Spanish attitude towards sports stars just a reaction to their success, or has it become a contributory factor? Would Andy Murray win that elusive Slam if we ignored his mental fragility and lauded him as the best thing since sliced bread?

That probably wouldn’t help either, but the important thing for me is how such an attitude seems to be blinding Spaniards to defeat. Their fierce pride increasingly applies only to victory. For some, defeat hurts and they’d rather not dwell on it and for others, defeat is an anomaly; they’re simply not interested unless Spain’s winning.

Perhaps the best example of this is can be found in the press. In Spain there are four national daily newspapers devoted entirely to sport, something alien to the UK. What is more, they are undeniably partisan, with AS and Marca backing Real Madrid football club and Sport and El Mundo Deportivo in favour of FC Barcelona. Marca goes so overboard in its coverage and praise of Madrid that you still have to delve deep to find coverage of an 8–0 Barca win on a day Real wasn’t playing. When Madrid loses, the cover is replaced with the most convenient diversion, distracting readers with irrelevant off-field trivialities.

The Spanish are so obsessed with winning that they shy away from defeat. The danger is that it could lead to a heightened sense of self-righteousness that in turn produces ever more embittered reactions as defeat starts to set in. Real Madrid is the perfect example. A blame culture, eye-poking and a general feeling that the world is conspiring against them prove that they have found it hard to stomach the ‘failure’ that has recently come their way.

The other disturbing trend – that of ceasing to care in the event of defeat – undermines Spain’s status as a dominant sporting nation. One of my flatmates shoved Nadal’s defeat of Andy Murray in the semi-final of the US Open in my face, but a couple of days later, when I informed him that Djokovic had won the final, he shrugged – not interested. Are the Spaniards in it for the sport itself, or just the status of victory? Increasingly and worryingly common is the attitude that winning is everything and taking part is nothing.

But Spain is winning everything at the moment, and as long as they keep that up everything will be peachy. What will happen, though, when they have to face up to the cold, harsh reality of being second best? It could be ugly, but then again we’d probably hear nothing of it.