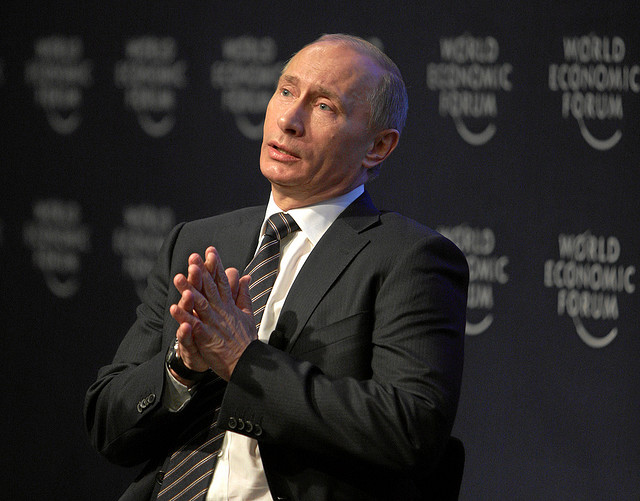 Will he stay or will he go?

After months of unrest, anticipation and hushed conversations, the day has finally arrived. Sunday 4th March. The date is everywhere: splashed across billboards, televisions, sides of buildings and metro tickets and most likely highlighted, underlined, italicised and twice circled with red marker in diaries Russia-wide. Election Day is here, and we are all waiting, breath baited, on the edge of our seats. Not for the results, obviously. The outcome has been pre-determined ever since Medvedev’s inauguration as chief seat-warmer back in 2008. What people really want to know is what’s going to happen afterwards: with all of the debates and protests said and done, how many voters will actually turn out against Putin at the polls? Will people vote with their heads or their gut instinct? And what will be the reaction when the reality truly hits that another generation is to be born and raised under Putin?

The British press’ reportage on the election seems to give the distinct impression of Russian society as a dichotomy between misguided, vehemently nationalistic Putin supporters and repressed, educated, middle-class opposition. Certainly, this dichotomy does loosely exist; however, speaking to one professional, university-educated woman in the wake of the mass pro-Putin rally on 23rd February gave me a fascinating insight into a situation which is far more complex than I had imagined. Naturally, this woman asserted, every Russian was fully aware of the corruption within government and, she felt, there could never be true democracy until it was dealt with. She certainly felt uneasy at the growing prevalence of extreme nationalism amongst Russians. Nonetheless, this was not enough to commit her to vote against Putin. After all, she continued, life has become so much better under his strong leadership. Fifteen years ago, Russians were ashamed of their nationality; Putin put an end to that humiliation and made them proud again. “Every time I hear people speak about Putin on the state channels, I become more and more sure of everything he has done for us”.

It may sound ridiculous, but the idea that in this election, just like in any other, votes are being exercised on the basis of reason and rationalisation rather than rampant fanaticism and dissidence struck me for the first time during this conversation. It complicates things somewhat, because as long as Russians directly associate Putin with the last decade’s dramatic increase in wealth, they have a tangible justification wanting him in. Whether it’s the driving force behind their vote, or something which just managed to pip other candidates to the post on the mental list of pros and cons, will be neither here nor there when the results roll in.

Nevertheless, this shouldn’t be written off as an entirely hopeless situation. After all, shouldn’t debate, even in its most rudimentary form and irrespective of the outcome, be encouraged? Although the Putin opposition, which has been so vocal in its protests over the past few months, will be defeated in terms of electoral outcome, it seems to me that the value of the role it has played thus far will really become apparent with time. In raising the profile of other candidates and the possibility of ‘another way’, it has become impossible to ignore the fact that elections – in Russian, ‘vybory’, literally meaning ‘choices’ – are thus named for a reason. I have heard people everywhere, from all walks of life, from teenage school children to old women, engaged in friendly discussions and heated debates. Russians are gripped. They’re hooked on democracy and, regardless of the outcome this Sunday, it’s a sentiment that they should strive to preserve. After all, it is this that can ultimately empower them to, slowly but surely, build a nation that they can truly be proud of.