The Right Man For The Job? 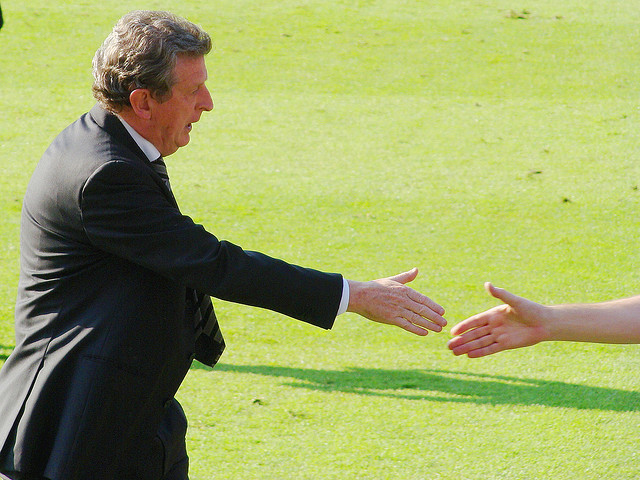 No turning back now.

Roy Hodgson’s appointment as England manager last week was met with scepticism and bemusement from all quarters. The public, the press, and even the players seemed to be united behind Harry Redknapp, the odds-on favourite since Fabio Capello’s resignation in February. There was less a sense of hope that Redknapp would be appointed, more a sense of expectation; the question on people’s lips was when, never who. The FA’s announcement that Hodgson was the only man they had approached, then, was a shock for many.

Now the dust has settled a little, people have started to dig out the Roy Hodgson fact file and ask themselves why the West Bromwich Albion manager had been made head coach of the national team. He may not be the ideal candidate for the role, but there are reasons that the FA decided to approach Hodgson, and understandable ones at that.

Firstly, despite their pleas to the contrary, money was most likely a factor. To take Redknapp out of his contract at White Hart Lane would have cost the FA in excess of £10m, whereas Hodgson’s deal runs out at the end of the season. It’s not hard to see why economics may have given Hodgson an advantage before any consideration of either managers’ experience.

Taking experience into account, and the FA have explicitly promoted the idea that Hodgson is the right man because of his international experience. During his 36- year managerial career, Hodgson has taken the reins at the United Arab Emirates, Finland, and – most notably – Switzerland, whom he took to third in the FIFA World Rankings. Hodgson himself has since prudently admitted “we were no more third in the world than I was a Chinaman”, yet his time in Switzerland was one of the highlights of his career. As David Bernstein, FA Chairman, pointed out, Hodgson is the first England manager with previous international managerial experience. This is undoubtedly useful for the role, and one of the key factors for his appointment.

His domestic record, too, is admirable. The job he did at Halmstad in his first managerial job back in 1976 was, as the man himself says, a “water-into-wine” affair. He took the relegation favourites to first place, giving them one of the most unlikely championship trophies in Swedish footballing history. He repeated this success at Malmo, winning five league titles in a row (in addition to two Swedish Cups) from 1985, the highlight of which was their defeat of Internazionale in the 1989–90 European Cup, including a memorable 1–1 draw at the San Siro.

This was to be the last time Hodgson would taste consistent domestic success, however. After stepping down as Switzerland manager in 1995 he took over at Internazionale, performing commendably in stabilising the club, but without any real accomplishment. His failure to control big players was first highlighted here as Roberto Carlos left the club after a row with Hodgson, who firmly believed Carlos should relinquish his left-back position for a more attacking role.

This flaw was again highlighted in Hodgson’s unhappy tenure at Liverpool, where he lasted just 191 days. Mediocre signings (Paul Konchesky, Joe Cole and Christian Poulsen among them) failed to fit into an unsettled side and Liverpool slipped into the relegation zone for a time, as they endured their worst start to a league season for 82 years. As England manager, Hodgson will be in charge of a host of oversized egos. Controlling these players and getting them to play well as a team will be crucial, and one the hardest tasks facing the new man in charge.

Hodgson’s supporters have pointed to his time at Fulham to suggest that he can, and does, command the respect of players. Taking the Cottagers to their highest ever Premier League finish (7th) and the final of the UEFA Europa League, beating Juventus 5–4 (from 4–1 down) along the way, made Hodgson the standout choice for LMA Manager of the Year, an impressive achievement. He has since guided West Brom to mid-table security after their flirtation with relegation under Roberto di Matteo. Both these experiences have gone some way in restoring the damage done to his reputation at Liverpool, as well as a poor spell at Blackburn in the late 1990s.

Roy Hodgson is undoubtedly a good manager. He was won several league titles (albeit none in the “major” European leagues) and many other honours in his 36 year career. He knows he is not the fans’, or the media’s choice, and that he will have to win them over quickly if they are to be reassured that he is indeed the right man for the job, as the FA believe. The sceptical reception he has received may actually work in his favour, as expectations are considerably lower under his reign than they were for Fabio Capello or Sven-Göran Eriksson. All England fans, having come to terms with the appointment, are now hoping Hodgson surprises us all.