The Renault Zoe and the Zoé Renaults 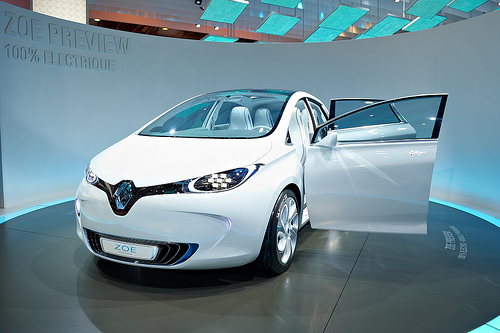 There’s a classic series of books called The Hitch-hiker’s Guide to the Galaxy by Douglas Adams in which one of the major characters, a visiting alien, had “skimped a bit on his preparatory research” and chosen what he believed would be a nice, inconspicuous name. Ford Prefect only realised after choosing this name that it was actually one of the most popular cars in Britain. As Adams joked in later interviews, he’d “simply mistaken the dominant life form”.

That’s all very well if you’re from a small planet somewhere in the vicinity of Betelgeuse, but for we terrestrial beings it may not always be so funny. At least that’s the claim of the lawyers in a recent court case in France, where the parents of two girls called Zoé Renault have just lost a legal challenge to prevent Renault from naming a new electric car… yep, you guessed it.

The two families have argued that their daughters – and to an extent all women with the same name – could be subject to a lifetime of mockery for sharing the name of a car, beginning with playground teasing and developing into comments in bars along the lines of “Can I see your airbags?” and “Can I shine your bumper?” (at which point, I hope, there were repressed giggles around the courtroom). David Koubbi, representing the families, told the Associated Press that “There’s a line between living things and inanimate objects” which is defined by the first name: the simple message for Renault was “first names are for humans”.

It’s a message, however, which has fallen on deaf ears. The all-electric Zoe ZE (Zero Emission), expected to be launched in 2012, was apparently named for the original Greek, meaning “life”, to emphasize the car’s environmental credentials. In his ruling, the judge accepted that for this reason, the word was simply a common noun, rather than a name; he also saw no evidence that it would cause the girls “certain, direct and current harm”. Koubbi claims that this logic is perverse, and the families intend to appeal the ruling as soon as possible.

The same lawyer is representing other Zoés across France attempting to challenge the name, claiming that it impinges their rights. A 23-year-old Zoé Renault told Le Parisien earlier this year that she couldn’t bear to be associated with the car for the rest of her life and hear such sarcastic remarks as “Zoé’s broken down again” or “we need to get Zoé overhauled”. The question is: are all these Zoés being overly sensitive?

Names are a part of our identity. They’re one of the ways that we separate ourselves from everyone else, and central to our sense of self. The connotations of our names will follow us around too, especially if they include a level of irony or humour. I, for example, am from Yorkshire, and my surname is also a cake, traditionally associated with said motherland and eaten on bonfire night. A cake I can’t stand, which is apparently mildly amusing to a few people. Zoé Renault is considerably more obvious, and after a while the mockery would conceivably begin to be irksome.

In addition, France as a nation takes names very seriously – until not so long ago parents were legally required to choose from a list of agreed, acceptable children’s names (probably to preserve the French nomenclature from the evil influence of Anglo-Saxon). This is no longer the case, but officials can argue against parental choices if they feel it may result in the child’s harm or ridicule: perhaps one day Zoé Renault could become one such name.

Still, perhaps the time, effort, expense and above all , the added publicity involved in a legal challenge just isn’t worth it. Parents attempting to protect their children are one thing, but the adult Zoés? In announcing to the whole world that you’re so sensitive to mockery that you would go to court to prevent any potential for it, you leave yourself open to so many people who enjoy poking fun at people just to get a reaction. Anyway, as a reason to tease someone, isn’t “the one who didn’t want a car named after them” just as bad as “the one with the car named after them”?

Naming machinery, be it cars, ships, or Eddie Stobart lorries after women is nothing new. Now, whilst I would have the deepest sympathy for a little girl called Titanic, at least Zoé Renaults across France won’t have to listen to jibes about their carbon emissions. Their electric personalities, however, may still be fair game.