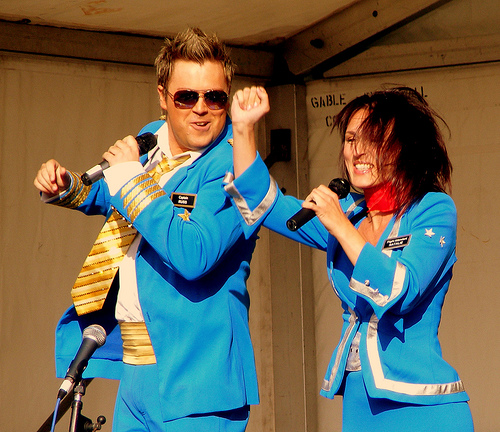 Scooch – Britain’s most famous flight attendants. The Mexican ones are better.

It’s fair to suggest that by now most people will have seen The Full Monty. The 1997 surprise hit focuses on a group of out-of-work Sheffield steelworkers who, in order to try and save themselves from desperate financial straits, put together a strangely successful striptease act. Failing that, you might have seen Calendar Girls, based on the true story of a Yorkshire Women’s Institute who make their own naked calendar to raise funds for their local hospital. Well, this week’s story is a combination of the two – but with Mexican air hostesses.

This week we’re venturing out of the igloos we’re all sitting in for the sunny climes of Latin America. Mexicana, the major airline operating in and out of Mexico (no, really) and one of the world’s oldest, has been in serious financial trouble for months, with debts of around 800 million (£500 million). In August, the company suspended all operations after filing for bankruptcy, though given bankruptcy protection by the judiciary soon afterwards. Hopes for the company rest on a potential restructuring plan which involves deep pay cuts and a 40% reduction in workforce. With staff not having been paid since then, they find themselves hugely out of pocket.

So, how to try and recover their losses? The answer came from a flight attendant named Coral Perez. Realising that “we all needed money, and… with so many pretty girls there were bound to be some who’d be interested” (as she told the Associated Press), she assembled a bunch of ten attendants who agreed to pose for their very own raunchy calendar. Photographed in bikinis and tiny outfits, draped over planes or in suggestive poses in the cockpit, the women all contributed to the 8,000 production costs out of their own pockets too – but the results have more than matched their investment. One thousand copies have already been sold amid a media frenzy which has given them overwhelming levels of attention, and a second print run of 3000 is already in the pipeline – at a price of 149 pesos or 12 each, the profit margin is looking good.

Now, I’m not usually the first to speak up in favour of this type of calendar, any more than I am of “lads’ mags”, page three or anything else which is based on the objectification of women – or, for that matter, of men. To my mind, an entire industry based on the reduction of a human being to an object of attraction is outdated, demeaning and obviously sexist. That said, this story really has more in common with Calendar Girls than Jordan (sorry, Katie) and her exposed silicon. I think it’s one of those cases where we’ve got to hand it to a group of women who took the initiative and made the most of an opportunity to help themselves and their colleagues. As one of them, Rozy Arcos, said when she presented the calendar, “We’re not models, we don’t have perfect bodies, but we want to keep going”. Ultimately, this is a means to an end which has proved to be extremely successful. Whatever you might think of the market for this calendar, I don’t think we should blame them for exploiting it; in fact, we should commend them for finding a way to raise awareness of their plight and do something to ameliorate it at the same time. Anyway, I have more respect for them than whoever stars in this year’s “Hollyoaks Babes” calendar, so I’ll leave you to make your own “cockpit” jokes.