The Man Who Would Be Kick-Ass 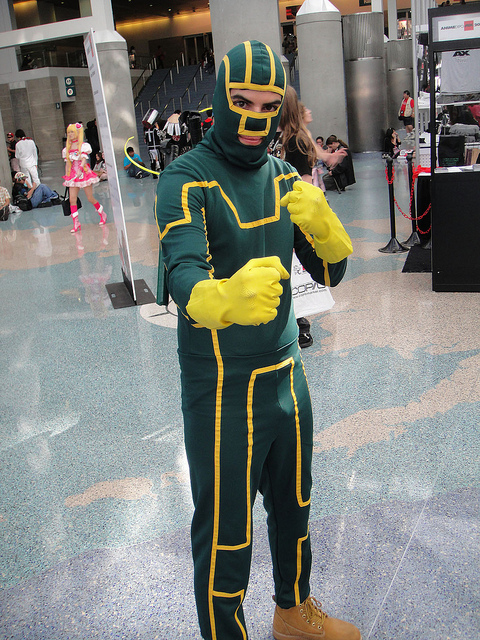 Gentle readers, I crave your pardon. It’s been a while. No doubt you’ve all been sitting at your computers every Wednesday since my last column in the desperate hope of further strange news-based musings. Your disappointment must have been, I am sure, too great for words, but you may rest assured that the hiatus is officially over. I return with the kind of news that could only come from the USA – a man acting like a superhero.

Phoenix Jones – a name which bizarrely isn’t actually his pseudonym – claims to be making the streets of Seattle safer since taking up his unconventional hobby about nine months ago. He disappears into the back room of a comic-book store (yes, really), dons tights, black and gold Lycra and a mask, and emerges as a Batman-esque crime-fighting force to be reckoned with. Bearing a bullet-proof vest, stab protection, tear gas and a taser for aid in his all-but-caped crusade, he has already prevented car thefts among other crimes. He’s not alone: apparently there are eight other members of his Rain City Superhero group doing the exact same thing in Seattle, though less is known about them. Presumably this is because they actually understand the nature of a secret identity.

Speaking to CBS, he claimed that “When I walk into a neighbourhood, criminals leave because they see the suit. I symbolise that the average person doesn’t have to walk around and see bad things and do nothing”. For all his protective gear, though, there has been a physical cost – he has been stabbed, repeatedly threatened with guns, and was recently kicked in the face while trying to break up a fight, resulting in a broken nose. Still, as you can probably guess, this hasn’t put him off – he told one news website that “I endanger my life with a reason and purpose”. As you might expect, local police have publicly encouraged Jones to hang up his mask before he is seriously injured, and insisted that citizens do not put themselves into violent situations unnecessarily but contact the police instead. The fashion police said something similar, but they were more upset about the Lycra.

Many of us by now will have seen Kick-Ass, and if you haven’t, you should. A comic-book adaptation itself, its central character is a teenage boy who wonders why nobody has ever tried to dress up and fight crime like the superheroes they admire so much; seeing plenty of opportunities to protect and serve where the police can’t or don’t, he dons a bright green wetsuit and does exactly that.

It’s a brilliant action-comedy, but it also raises plenty of questions about justice, apathy and vigilantism: in what will one day become a classic scene, Kick-Ass picks himself up from the ground after being beaten by a gang, looks around at the circle of people filming him and pants “Three assholes, laying into one guy while everybody else watches? And you wanna know what’s wrong with me?”

That scene, for me, hits the nail on the head. Vigilantism, for me, is intrinsically wrong. Breaking the law in the name of preventing others from breaking the law – using the threat of violence to prevent violence – is not only paradoxical but risks reducing the perpetrators to the same level as the criminals they supposedly suppress; it’s impossible to claim any moral high ground. Moreover, it undermines the authorities who have been entrusted with responsibility for law and order and do work extremely hard to enforce it. Of course, it’s also extremely dangerous.

Still, it’s hard not to see where people like Jones are coming from. When citizens are surrounded and intimidated by crime everywhere they go, and the police are so overstretched and mismanaged that they can’t possibly deal with the number of incidents coming their way every day, it makes sense that individuals move in and attempt to fill the void in their own way. People who are genuinely angry enough will inevitably want to intervene. But beyond that, Kick-Ass summed it up nicely: when so many of us allow injustice and cruelty to carry on under our noses and do nothing to change it, do we really have the right to judge the odd person who does something about it?

I’d still maintain that vigilantism is born of a revenge instinct. Coming out of anger rather than respect for the rule of law, it’s understandable but never commendable – and unless you happen to have been bitten by a mutant spider, turned green and angry by radiation or sent to Earth from a dying planet called Krypton, it’s highly dangerous. But then, there’s a reason that Batman has been so successful in recent years relative to other superheroes, and I’d argue that it’s the fact that he has no actual powers. He may be intelligent and rich, but ultimately he’s an ordinary man who is moved to act against the huge crime problem his community faces – deep down, a lot of us can relate to that.

Well, apart from that time when he fought Arnold Schwarzenegger. I mean, Batman and Robin, honestly…