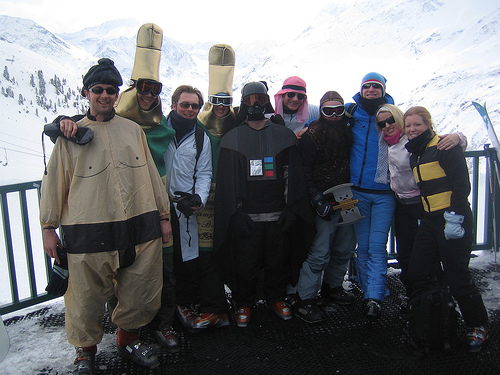 More trouble than it’s worth?

Tonight is the night of that party you’ve been waiting all week for. As usual this big event is, of course, fancy dress – the theme? Well that doesn’t matter. At any fancy dress party you always see the same old characters: a cowgirl, caveman and at least 5 very drunk footballers in morph-suits. As I’m sure you’ve guessed, I am not a great fan of these shindigs. The main reason not being that you have to dress up, but that if you don’t you are instantly despised and shunned by the entire assembly of individuals for not dressing like a simpleton. Ironic.

As it happens, tonight is the night of the big fancy dress party and I, as far as I can tell, am the only one that isn’t going in fancy dress. The reasons for this are many. I have no money to spend on a one-off costume. I have no time to spend making said costume. And last but not least, the last time I went to a fancy dress party I got my jacket covered in my concubine’s body paint (not even the chocolate kind), which, as I’m sure most of you will know, is a pain to get off. Ok, maybe getting some was a factor, but I have my needs, and that’s not the point.

Within minutes of posting my supposed rebellion on Facebook I have already received the standard smattering of abuse for being a “pussy” and other such eloquent put-downs. Let’s be honest, shall we? The only extra enjoyment that comes from being in fancy dress is laughing at your closest friends because they have permanently dyed their face orange (as I have on so many occasions); or, if your friends, like many of mine, have way more free time then any student should, gasping in awe at the stupidly complex costume that they have made from a box of Frosties and some paper clips.

After these 10 minutes of merriment comes the reality that you can’t move, sit down or go to the toilet without disassembling the 3 tonnes of cardboard that are strapped to every part of your body – which is fine, if you are a living statue with a bladder the size of Boris Johnson (who is a bit like a bladder, in the sense that he is full of piss).

At every one of these parties I see at least one ill-fated individual sat in the corner of the immensely crowded bar frowning because they have just realised that because of the brilliance of their three-week-planned costume design, they are in fact unable to lift a drink to their lips. The only thing worse than a fancy dress party is one where you are destined to spend the rest of the night sober – and the lucky people who do have the ability to drink can look forward to waking up with everything they own covered in glitter, glue and sticky tape.

To round up then, tonight I am content with some jeans, a t-shirt and a jacket. And while I’m sure I will get more than my fair share of abuse for this non-conformity, I will be happy knowing that, when I wake up in the morning, my face won’t be stuck to my pillow by 3 inches of face paint.

It really irritates me that people can get so much abuse over such a little thing.