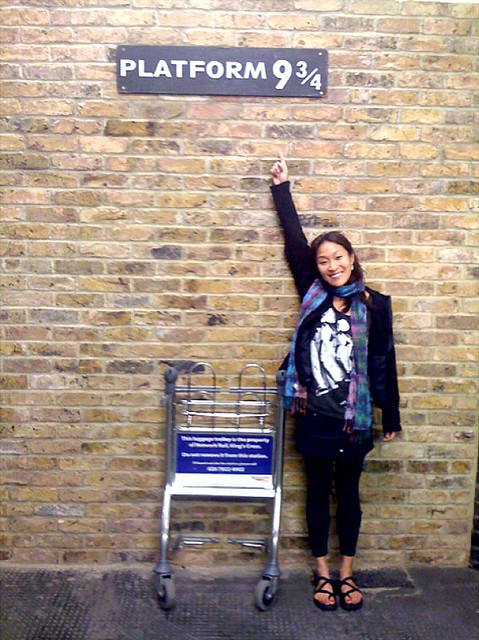 Not the weirdest thing about this station, apparently…

I’m sure that many of you reading this will have had the pleasure of navigating King’s Cross train station. Two days ago, I had the delightful experience of having to catch a train from King’s Cross; I am awash with envy of those of you who have never had to endure this. Kings Cross is like no other train station I have ever been to.

For starters, it is the only station I know of that has a platform 0. This surge of genius clearly came from someone inspired by J. K. Rowling’s platform 9 3/4.

My main problem, however, is the ridiculous queuing system. I’m sure you all know that in normal train stations you get your ticket, look at the hideously disorganized screens which tell you what platform your train will be at, go to the platform and get on it. The people in charge at King’s Cross have obviously found some major flaw in this system and were therefore impelled to change it. This involves having several lines drawn on the station floor which represent queues. About 10 minutes before the train is due the screen flashes up and tells you what queue to join. As people who had never been to King’s Cross before, the letters QB in the platform column of the screen left me and my long suffering partner completely confused. At first we thought this may be some weird platform code (in keeping with the absurd platform 0 idea) – we then proceeded to run around the platforms like headless chickens trying to find the elusive platform QB. After exploring the entire station we remembered the mass of markings we had seen on the floor earlier.

Whilst complaining to my girlfriend about this stupid system I was interrupted by a lovely Southern businessman who clearly had a different opinion. When he said, “The system is fine, we queue, then we get on the train”, I had no idea that the queuing part and the getting on the train part are not linked in any way. About 2 minutes before the train is due the platform is released on the big screen with as much anticipation as the next Call of Duty. From this point the queue dissolves as everybody in it runs as quickly as they can to the stated platform and continues to violently push their way onto the train – much the same as we see at every other train station in the country.

What we see, then, is queuing because there is nothing better to do. Seemingly the only purpose this system serves is to trap innocent bystanders inside King’s Cross. We often hear that we, the British, love to queue, and this is something we can clearly see in our everyday lives. We queue for pretty much everything; food, clothes, buses, clubs and even for the tickets we use to get on the trains. But for some reason this is something I never thought I would see on a platform. This is probably because trains have many doors on many carriages and thus queuing is unnecessary.

Maybe I’m wrong, or maybe I’m just not used to it, but that is this week’s little thing.