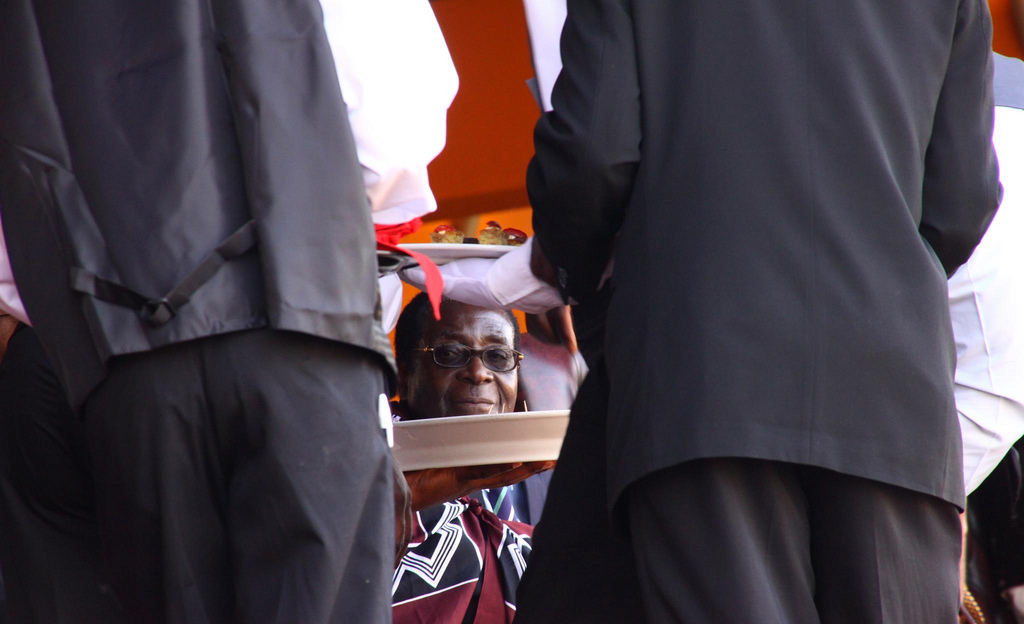 Lonely diner – all the service, none of the company

As I’ve already made clear in , dictators are a distinctly peculiar breed of people: their eccentricities are frequently as famous as their atrocities. Another of the most telling facets of tyrants is their deep-seated insecurity. It is not uncommon to find great sprawling posters of themselves flashed across the faces of all public buildings in their capital cities – public buildings, it should be pointed out, that will frequently line the edge of a square they have named after themselves or their greatly exaggerated achievements.

But why return to the subject of the dictator? Of course, they are still found lurking in countries across the world, striking fear into the hearts of their populace. But, as a recent advertisement has demonstrated, they are fewer in number than they once were. Nando’s, the chain of restaurants famed for its delightfully delicious chicken dishes, recently produced an advert for South African television that sparked an outraged reaction and a swift withdraw. It features current Zimbabwean President, Robert Gabriel Mugabe, sitting alone at the dinner table, looking sadly at a dozen empty places. His eyes cloud over and the scene shifts to a time a few years previously. Again, Mugabe is alone, gazing apparently wistfully into space, his face sad. But then, a pair of white-gloved hands appear from behind, covering his eyes. A slow smile spreads across the dictator’s face. Moments later, a revitalised Mugabe and Colonel Gaddafi can be seen chasing each other with enormous water pistols across a sunlit green lawn while the tune of “Those Pleasant Days,” drifts across the soundtrack. The advert continues with ‘footage’ of Mugabe singing karaoke with Chairman Mao, making angels in the sand with Saddam Hussein and driving a tank down a street with Idi Amin. At the end of the advert, the scene returns to a contemporary Mugabe staring mournfully once more at his empty table before the voiceover announces that “no one should have to eat alone,” and a selection of Nando’s quite simply excellent chicken-based products appear at the opposite end of the table. (And before anyone asks, I am not sponsored by Nando’s to recommend their superb dishes… but I would enjoy a free meal were it offered…).

Perhaps unsurprisingly, this advert was met with a certain degree of amusement from the greater part of society. However, that was not sufficient to prevent it from being swiftly withdrawn following threats made against staff working in the global chicken chain’s Zimbabwean restaurants. This is not the first advert from Nando’s that has caused a certain degree of controversy, though possibly the first that has elicited death threats. Previous adverts broadcast include a guide dog that deliberately leads its owner into a lamppost in order to eat his chicken and a puppet that mocked former South African ANC youth leader Julius Malema.

But to return to the “Last Dictator” advertisement. Clearly, Mugabe’s cronies felt that the advert failed to show a sufficient level of respect to their President, portraying him as a child-like figure worthy only of our pity and certainly not our fear and reverence. In the past it was often considered a crime if one failed to show due respect to the sovereign, with “Lese-majesty,” literally translating as “injured majesty” being enshrined in law in many states. In Thailand this is still the case, with regular prosecutions proceeding against anyone who defames the monarch. In some European countries, it is also remains an offence: Spain, Denmark and the Netherlands all having laws on the statue books protecting their respective (and presumably thin-skinned) monarchs. Poland has a variation on this law whereby it is also a crime to be rude about foreign heads of state as well. In a rather peculiar example, police hunted a protestor who apparently farted to express his dissatisfaction with the premiership of the late Lech Kaczyński.

It is thus apparent that the ruling elite of many countries (and I’m sure that ours is no exception) greatly desire to be respected, and not infrequently, feared. Humour mocking their achievements – or any other expression of contempt for their actions – is not tolerated due to the dissent they believe it fosters. Therefore, I am left wondering quite what world leaders would make of a website that systematically ranks them all in terms of attractiveness. The website (aptly named “The Hottest Heads of State“) covers 209 leaders ranging from the “Hot Number One”, Jens Stoltenberg, Prime Minister of Norway, to the rather aged and decrepit “Dear Leader of the Democratic People’s Republic of Korea” who languishes in a dismal last place. At the time of writing, our own Prime Minister lies mid-table at place 115, behind such handsome and virile figures as the former Prime Minister Silvio Berlusconi and Mahmoud Ahmadinejad. Perhaps, if he were to be made aware of his position, Mr Cameron too might soon have laws made against disrespecting the national leadership.

One world leader who certainly will be unhappy with his position is Vladimir Putin, the Prime Minister of the Russian Federation. For a man who prides himself on his macho and virile image (posing bare-chested with a crossbow and whilst riding, fishing and engaging in various other sports), being placed 23rd, behind his protégé and President, Dmitry Medvedev. Perhaps the high rankings of both these leaders are the secret reason behind the continued success of The United Russian Party – besides electoral fraud (as claimed by the Russian Communist party). Russians are simply proud that their country is led by two of top 25 hottest world leaders. Certainly Mugabe has another reason to look sad, meriting only a depressing 205th place. But at least, unlike in the Nando’s advert, he still has company down there with the self-proclaimed “Highest Incarnation of the Revolutionary Comradely Love”, Kim Jong-Il.