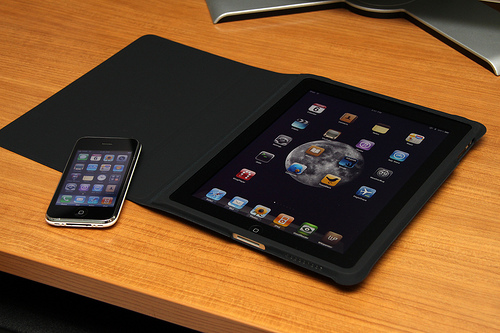 The iPhone and the iPad: compare and contrast.

Christmas is fast approaching, and that fantastic time when you realise that you don’t know those closest to you well enough shows when you struggle to buy a present for them. I think that my parents are notoriously difficult to buy for, and it seems they agree. My dad is apparently in the same position when buying gifts for my mum, as he recently asked me if Mum would like an iPad. This was the point when I realised that my father clearly ignores everything I say, and I am no longer the favoured child in the family. Ollie the psychic octopus (Paul’s cousin – and no I am not making this up) predicted the iPad will be the bestselling gadget this Christmas. I really hope that he is incorrect, because I hate the iPad as a product more than any other product that has existed (and those who have read this column before know why that is a big deal), and after reading this article, hopefully you will too.

The iPhone was a fantastic product, but naturally I also hated that. Everyone that owns an iPhone thrusts it in your face, proclaiming that they are the second coming of Jesus as you only own a Nokia 3331108979 that can ONLY function as a phone. They would go on and on and on about how their life is now better than their previous life and your current state of being. The iPhone is undeniably cool and popular, however, not unlike myself (*cough*), and has sold extremely well. The iPad was built on the success of the iPhone.

The development of the iPad went like this: “Brilliant!” Steve Jobs thought. “I know how to make EVEN MORE MONEY! I’ll just make an iPhone, but 4 times bigger, and then give it a name which sounds like a sanitary product! My minions will love it!” And herein is the main issue with the iPad. It is like the iPhone, but worse in every single way.

The name itself is probably the funniest aspect of the iPad. I’m sure women everywhere were excited to hear that Apple had made an electronic sanitary pad, only to be disappointed that pouring liquids on it would break it. Mocking a product solely on its name hasn’t been this easy since Nintendo brought out the Wii, a decision that even the makers themselves mocked on launch day: “we’d like to thank everyone who supported the decision to name our product the Wii. Both of you were very kind”.

Technically, there is much to hate with the iPad. It still won’t support Flash, and requires a 3G contract, with the 3G enabled iPad in order to browse the web in an area without WiFi. Brutally, if you wanted a device for browsing the internet, you would buy a laptop or netbook, which are both cheaper and faster. The iPhone was great because you could have the internet in your pocket, but you literally cannot do this with an iPad due to its size. Furthermore, in order to use the iPad, you either have to hold quite a large object with one hand for a period of time, which will get tiring, or put it on your lap which again will hurt your back after prolonged use. Nobody has sanely said “I love the iPhone, but I wish that it was bigger so it’s harder to carry and more uncomfortable to hold.”

Critics have claimed that the iPad will kill Amazon’s Kindle. They’re wrong. Admittedly, it does look a lot cooler than the Kindle, which looks like it was made in the 80s by hand. However with a starting price tag of £430 at the Apple store, almost 4 times the price of a Kindle, it seems unlikely that people will buy it purely for the purpose of reading books, especially when looking at the LED screen for a prolonged time will burn your eyes out. The Kindle, by comparison, doesn’t have an LED screen so you can use it in the sun, whilst on holiday for example.

Unfortunately, there will be people out there who will buy the iPad. These people are the sort that would buy a fresh steaming turd if it were shiny and had the Apple logo on it. They say that Christmas is a time for showing someone that you love them with a gift (well it is now – the religious festival has been vastly overshadowed by materialism). If this is so, then please don’t buy the iPad for your loved ones or yourself. It is the most expensive and soon-to-be-obsolete product this Christmas. Well, not entirely obsolete. It can be used as a drinks tray.