The grass on the other side 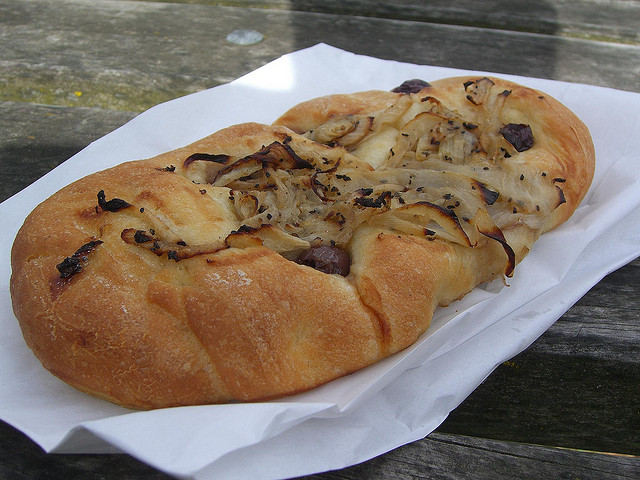 I’m sometimes surprised that I didn’t think to move to Southern Italy sooner in life; after all I love spaghetti, swarthy men and sunshine. Nevertheless, no matter how much I like living in Puglia, I cannot deny that living away from England does make you realise the advantages that Blighty has to offer.

It is a truth universally acknowledged that Italy is a gastronomic capital and I can assure you that Italian cuisine has always been my go-to option. Nonetheless the phrase “it’s the greatest thing since sliced bread” can really carry no weight whatsoever here. Sliced the bread may be, great it certainly is not. This may seem trivial to many of you, but I feel a pang for Hovis whenever I peer mournfully at the selection of thin, small squares of bread the supermarket shelf proposes. Sure, I like Ciabatta and Focaccia as much as the next person, but there’s a time and a place for a good, hearty slab of toast. Sky Plus broken? Slice of toast. No messages, not even from your mother? Slice of toast. It’s basically a hug on a plate; which of course brings me to the other consumable hug: tea.

When I lived in France I learnt with absolute horror that their idea of making tea was putting a teabag and water in a mug and popping in the microwave. Blasphemy! Moreover I’m the kind of person who requires a sound of some variety when the water boils…otherwise I’m left opening the microwave door every ten seconds to finger-test the temperature, both a palaver and potentially burn-inducing. Not the most relaxing way to spend a morning break. Italy too appears to think that electric kettles are an unnecessary addition to a kitchen. Waiting for your hob-kettle to boil for about 10 minutes is, after all, terrific fun.

Waiting is something the Italians have a very bizarre approach to. Take the fruit and veg section in the supermarket for instance. You want three carrots, you take three carrots, yes? Non, non e non. You take a ticket with a number and wait for 40 minutes for the five elderly Italian women in front of you to be served their weeks’ worth of vitamin C by one man before you can put in your own, two-second long, meagre request. A last minute dash to the shops is anything but a dash.

There is no doubt about the fact that Italians do food incredibly well, and, given that as a child I ate pasta and tuna almost every day, it would take a lot for me to ever get fed up of Italian grub. This being said, should you require variety and a taste of international nosh, you will be left stumped and inevitably staring down at yet another pizza menu boasting ingredients such as ‘rape’ (fortunately merely some sort of unappetizing vegetable). Get tired of pasta/pizza at your peril.

Their low tolerance of anything foreign can also be seen in their reaction to anyone that dares to speak English. People quite literally turn their heads and stare. Occasionally they say, “Ehhh you speak English!” A gold star and a pat on the back to you, Sir, excellent powers of observation. However, more often than not the Italians I have encountered seem to be slightly disgusted by the Anglo Invasion. Politeness? Never heard of it? Customer satisfaction? You must be joking. On both occasions when I have been to the bank I have been greeted with icy coldness. A friendly smile and a warm “buongiorno!” will be stonily ignored. Never in my life have I seen such unhappy and angry employees. The Bracknell branch of Santander suddenly seems like Disneyland.

However, the people skills of the Italian men one comes across in the streets differ drastically. My walk to and from work includes traversing a park named Piazza Umberto: where by day children scramble across climbing apparatus and swings, immigrants loiter at night smoking marijuana; where by day woman eat their lunch and gossip on the stone benches, tramps at night rest and attempt to sleep and no matter what the time of day, groups of old Italian men will gather to play cards. What’s that about a stereotype?

Nevertheless, no walk through Piazza Umberto goes without some masculine voice calling out to you. Then again, even worse are the men who sidle up right next to you whispering “Che carina!”. It would seem to be that no matter what your personal appearance, the Italians remain persistently interested. Last week I found myself walking home following a night out: matted hair all over the place, bleary eyed, face smeared with mascara and stuffing a chocolate cookie into my mouth, “Bellisima”, an old man muttered under his breath as he shuffled passed me. He needs to work on his standards. On another occasion a man actually followed me down the street with a string of come-ons. It all served to remind me of a trip to Morocco where the men would follow us from behind and say “nice eyes!” I can’t deny that it’s actually got to the point where if a day goes by and I don’t receive some form of compliment I sink into a whirl of depression and anxiety. Although potentially flattering it must be said that the constant attention does get somewhat wearing. The opportunity to mind your own business is a luxury rarely afforded.

This all being said, when I hear my English friends moaning about their early morning get-up in the dark and cold, I struggle to hide an overwhelming sense of smugness. 8am commute pressed up against the sweaty hoi polloi? Nah, I’ll be swanning down a palm-tree lined boulevard in the sun. Anyone for a gelato?